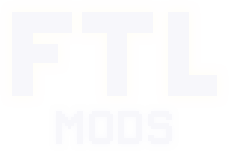 A "mod" (short for "modification") is a fan-made alteration to a game which allows it to look and act different than the original. In the case of FTL, the community has created a number of mods, ranging from redesigns of the game's art all the way to mods which create brand new campaigns and gameplay modes.

Mods are not official patches. They are not developed, published, or maintained by any members of the development team, and as such, we cannot guarantee their stability nor are we responsible for any content we did not create ourselves.

Slipstream is a fan-made mod manager for FTL which makes it easy to install multiple mods and control which ones you use, when you want to use them. It is the go-to method of using mods with FTL.

1. Download Slipstream Mod Manager zip file from the official thread in our forums.
2. Extract the Slipstream folder from the zip file. 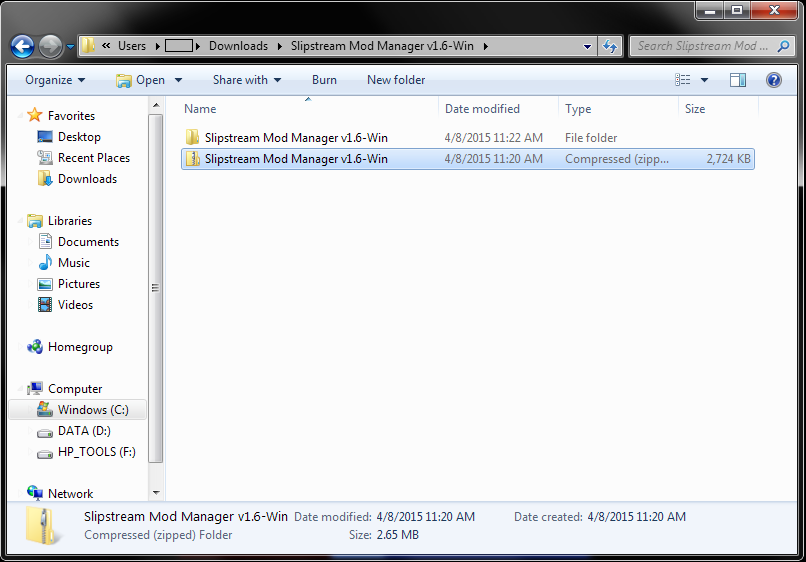 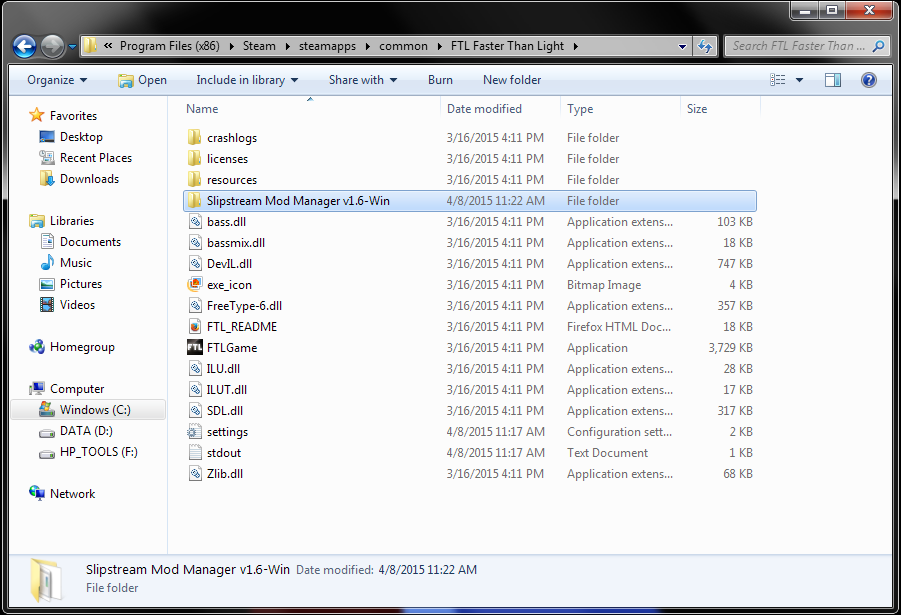 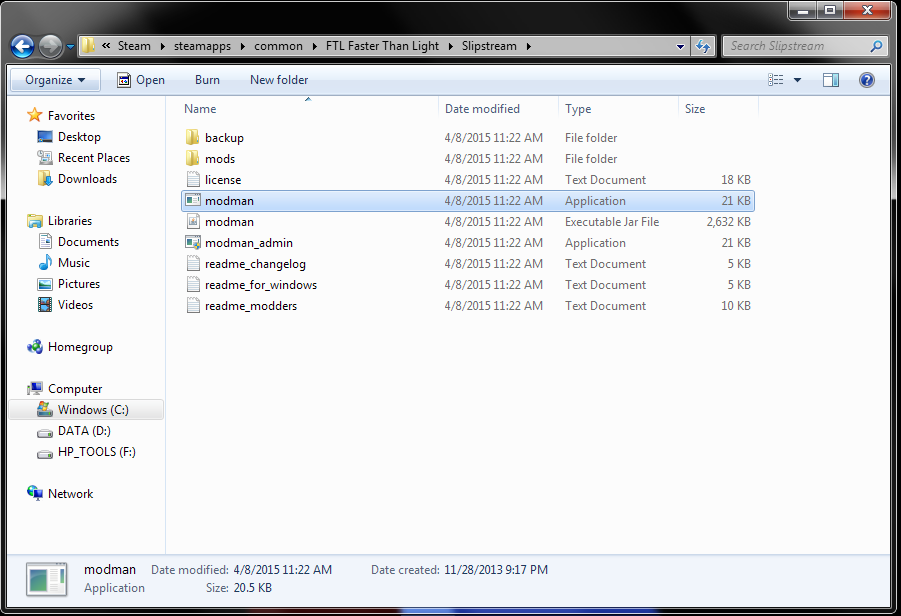 Double click on "modman" to start Slipstream. You will see a black window while the program searches for your copy of FTL. You will see a confirmation popup (see screenshot) once FTL has been located. Click "yes" to confirm and launch Slipstream.

You must return your copy of FTL to its default, unmodded state before installing Slipstream. Additional details available in this post.

While it is possible to use two mods at once, mods get installed in the order in which they are listed in Slipstream. Therefore, if two mods write over the same files, they will never be able to work together successfully.

To add mods to slipstream, navigate to the steamapps/common/FTL Faster Than Light folder (where the game is located). Once there, move your downloaded mod into the "mods" folder.

To activate a mod, run Slipstream, select the mod(s) you want to use, then click "patch". Once the program is done, you should be able to run the game as you would normally, but with new access to the mods.

You can use Slipstream to both install and manage your mods. To add a new mod, please follow the instructions below.

1. Choose the mod you would like to install. For this tutorial, we will be using the Shiny! UI Overhaul and Graphics Mod to change the look of the game. For reference, this is screenshot of the default hangar screen: 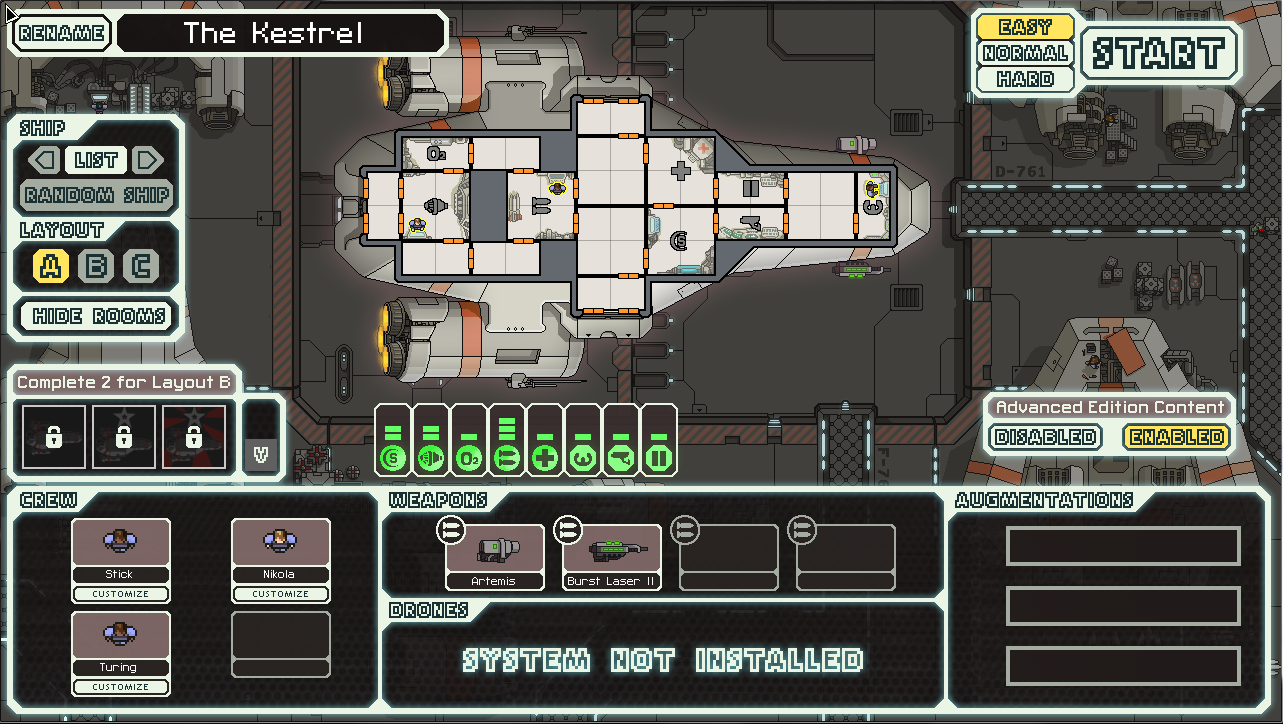 2. Download the mod to your computer. You should see a file similar to the one pictured, ending with ".ftl" or ".zip". Slipstream can be set to recognize zip files by launching it, going to the file tab at the top left, clicking preferences, then checking the "allow_zip" option. (Note: Some operating systems may remove the ".ftl" ending. If this happens, you can simply add it back yourself.) 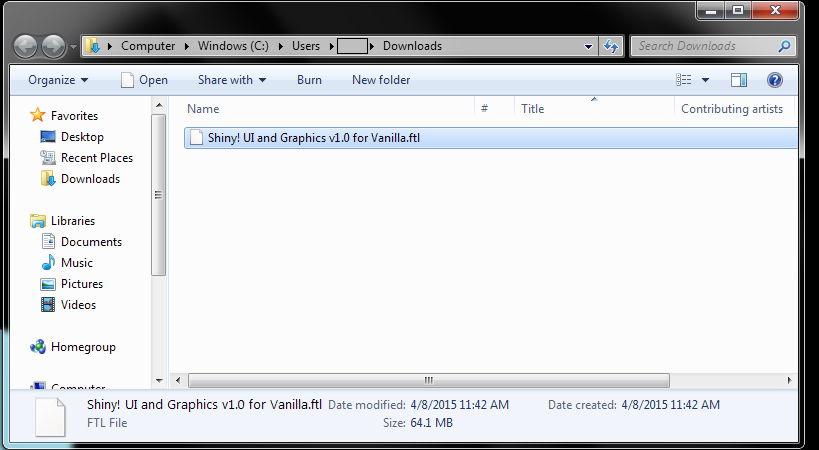 3. Open your Slipstream folder in a second window and move the new mod into the "mods" subfolder. 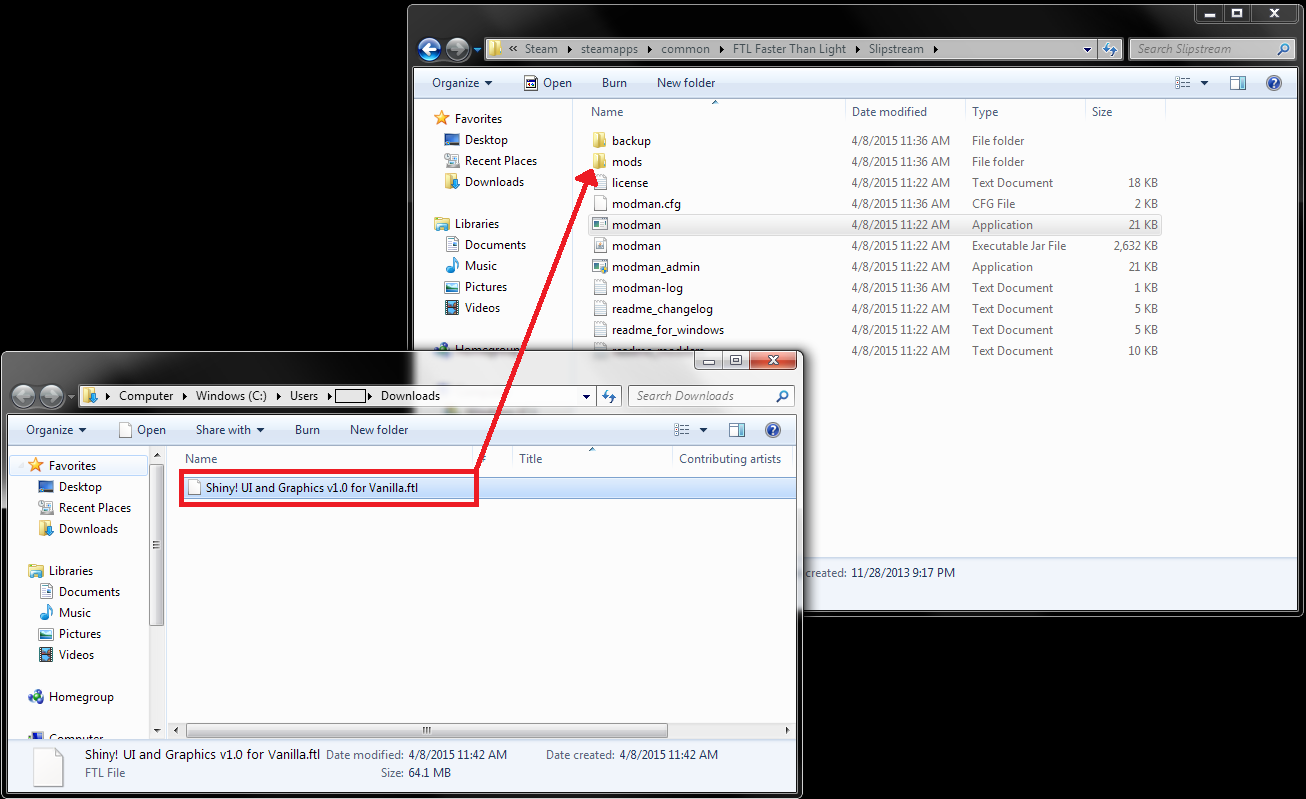 4. Once you have moved the new mod, open Slipstream. The newly-added mod should appear in the list of available mods. Check the tickbox next to the new mod, then click "Patch". 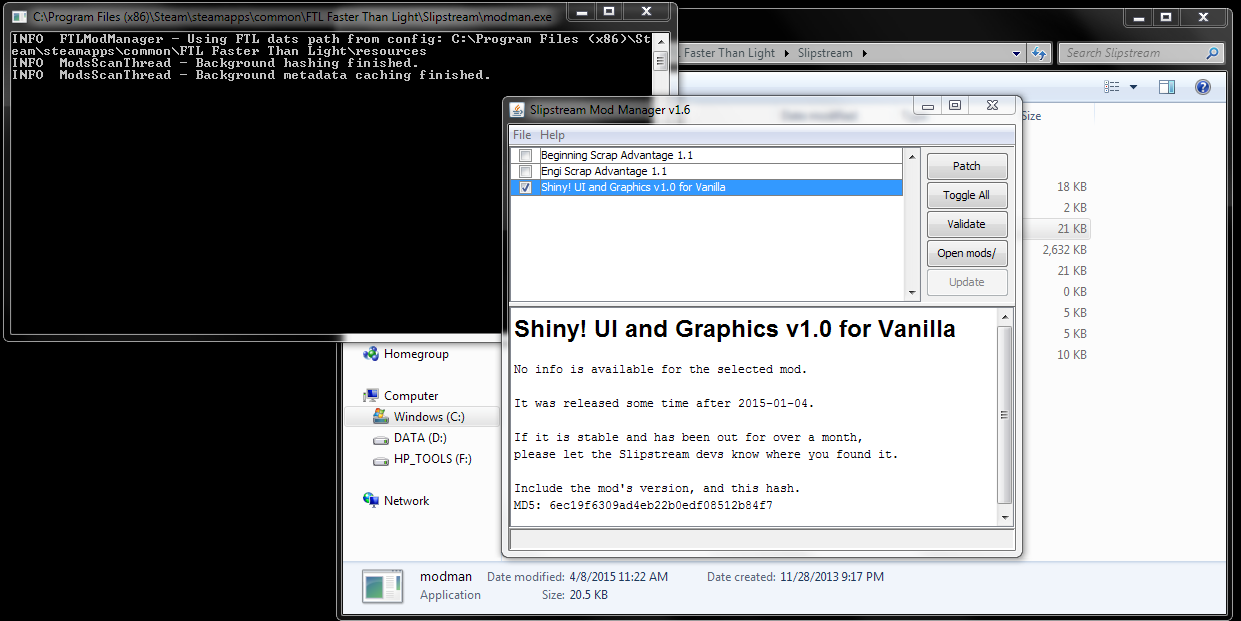 5. When Slipstream has finished patching the game, you will see a popup asking if you would like to start FTL. Click "yes" to launch the game and see the results of your newly-added mod. 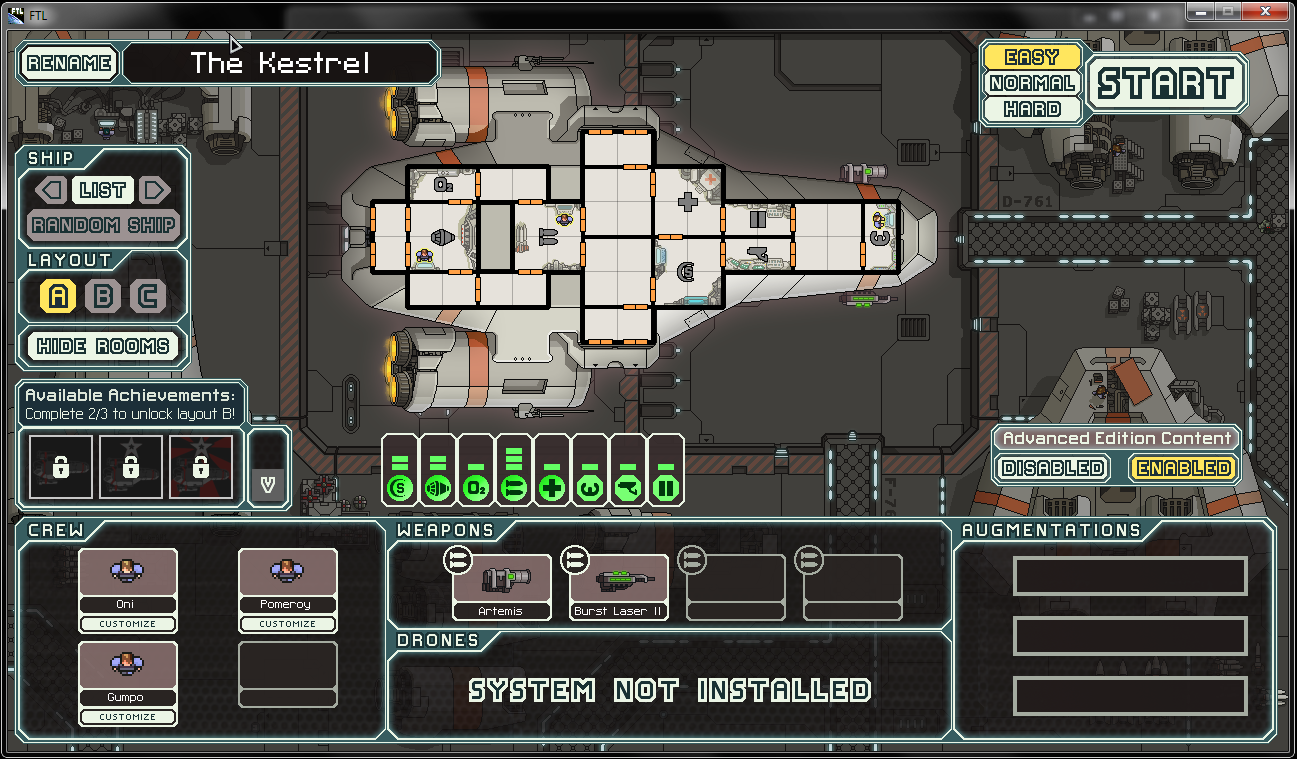 Note: You do NOT need to run Slipstream every time you play; only when you need to change which mods you are using.

Hyperspace is an FTL hard coded modding API. It's installed separately, and provides many new features for mod makers to utilize that are not possible in conventional modding. Hyperspace only works on FTL 1.6.9 currently, but includes a .bat file to automatically downgrade your game and install the hyperspace files.

Arsenal+ is a complete overhaul mod, adding new equipment, sectors, factions, ships, and more. Originally Russian-only, translation work was completed by Mr_Easy_Money, and the original version can be found on vk.com. 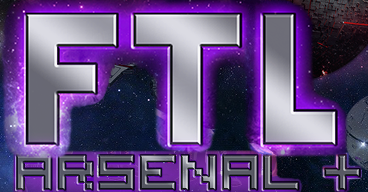 Multiverse was originally intended to be a small weapon/drone and ship pack, but a need for lore to connect the new factions and a growing dev team lead to larger ambitions, and eventually Multiverse bloomed into a full overhaul project. A large portion of assets from PC are recycled, many with improvements, but code wise the mod has been made completely from scratch. 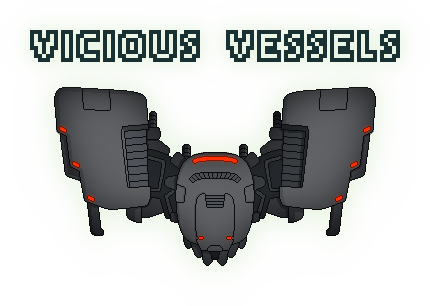 Arriving at the beacon, you discover a whole new, extended, balanced and lore-friendly FTL experience. Fight space stations of the different factions. Use dozen of new weapons and see various new enemy classes using them against you. Make decisions in new events and follow immerisve new quest-lines. Escape the Rebel fleet in a harsher, but richer galaxy. 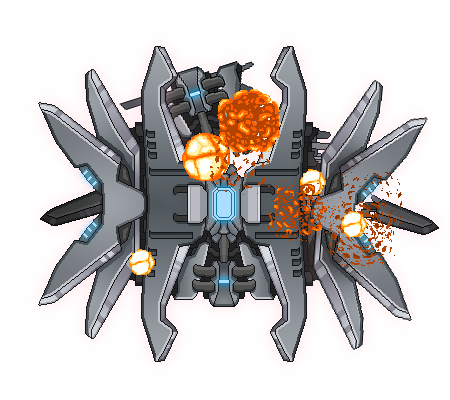 This collection of mods enables users to add between 2 and 24 more levels to the Rebel pursuit indicator on the sector map screen, allowing you to gauge easier how far the fleet will advance after a certain amount of jumps and if it will overtake a certain beacon. 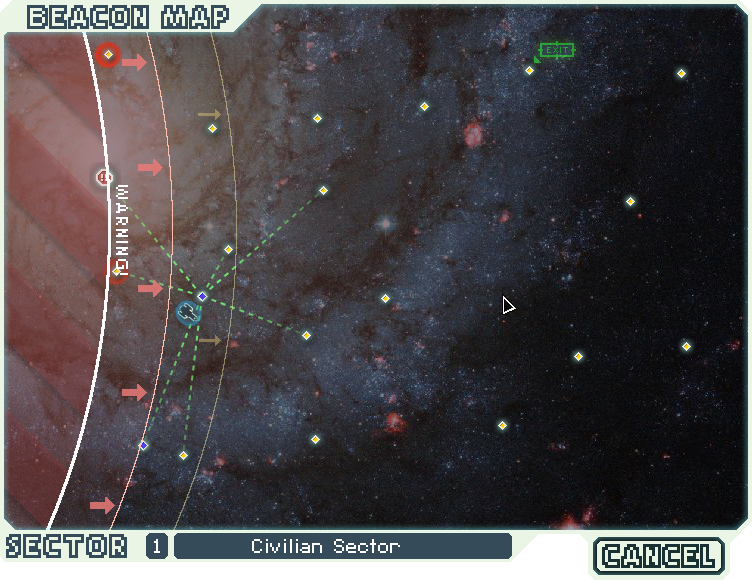 Descent into Darkness is a complete overhaul modification for FTL. You do not start with a single ship loadout and play the game regularly. Instead, you are given a barebones ship hull and pick your starting gear, crew, augments, everything. 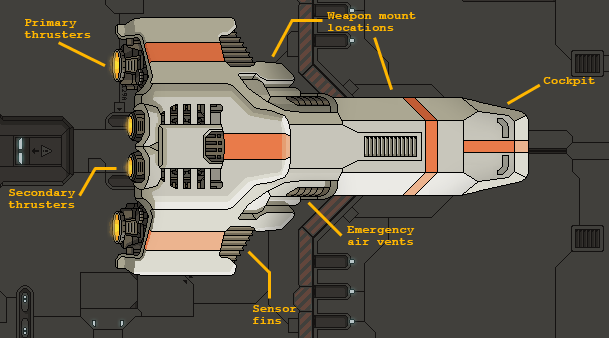 This mod replaces all of the existing planets and backgrounds and adds a lot more. 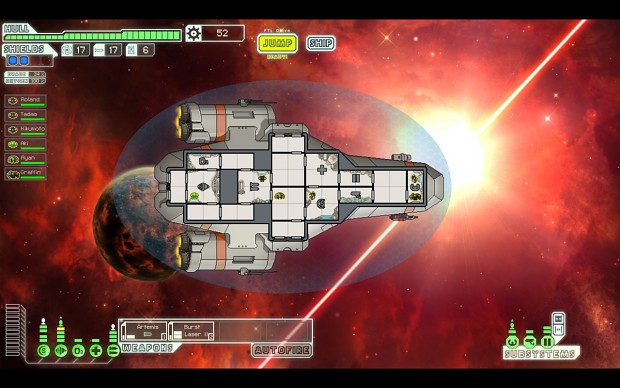 Hosted on NexusMods.
The rebels can no longer chase you throughout endless space, -- however -- they will be waiting for you in the final sector -- so be prepared. The following are fan made mods which change the language of the text presented in FTL. They can be installed like any other mod using the steps described above. We cannot guarantee their accuracy or content. If you encounter any questionable content or know of any additional mods we should add to this list, please let us know.

Japanese: "Localizing into Japanese" - via https://seesaawiki.jp
ENGLISH: Translating completed. With the update to AdvancedEdition (1.5.4), additional significant text changes have been made.