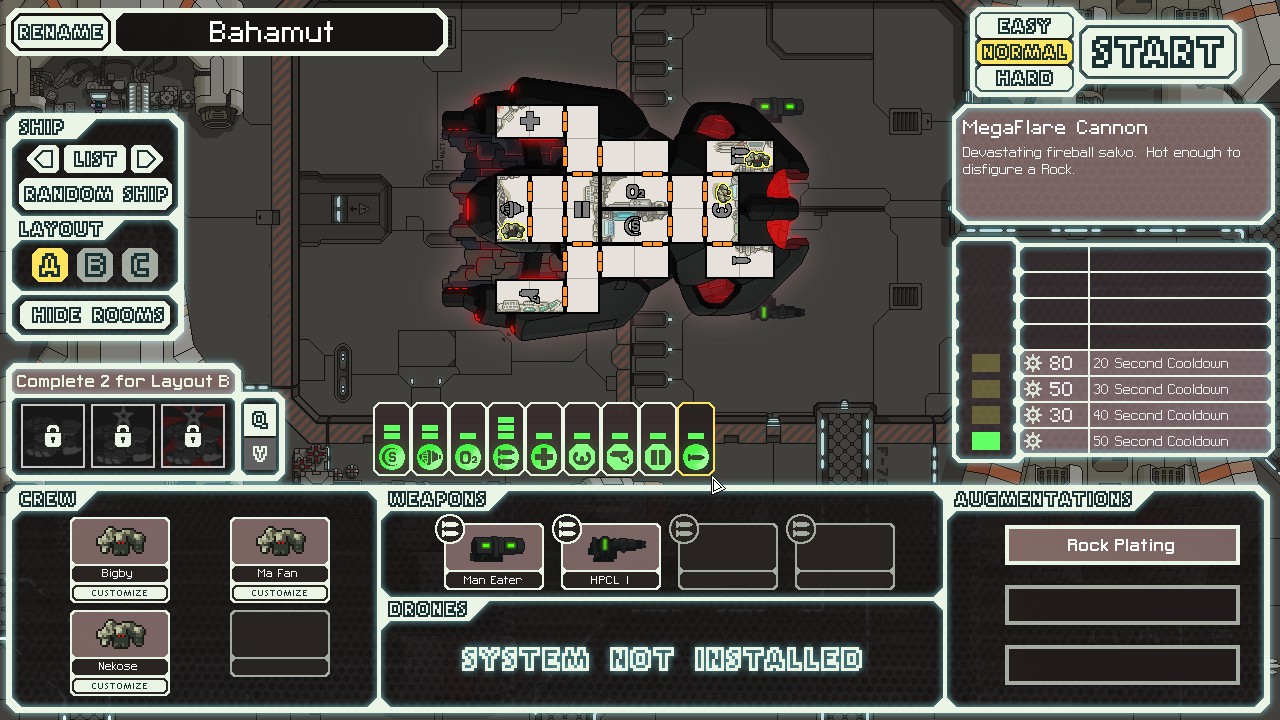 Update for AE.1:
-Updated for AE compatibility
-Split 2x2 rooms in half to allow for new AE systems
-MegaFlare Cannon: Decreased fireballs by 1, increased shield piercing by 1; should now work against those 4 room drones in CE
-(Jan. 9, 2015) Silent update for misc.xml.rawappend

Such a big name for a little ship. After the trouble I went through making my Federation Heavy Assault ship, I wasn't going to bother trying to make a big Rock ship.

Known Issues:
-Captain's Edition features an enemy with 3 rooms. This will cause the game to crash when the artillery tries to fire, so turn it off if you come across this enemy. I already decreased the artillery to 4 shots to deal with enemies featuring 4 rooms; I'm not decreasing it again.

Unfortunately, I had to split all of the 2x2 rooms so I could include all of the new systems.

I tried to redo the artillery weapon to use the new "burst" mechanic, but it would only shoot one shot. I guess the charge mechanic (Swarm Missiles) is required to do more, but I don't see that working for the artillery system.

I wanted to do 4 dual shots, to make it more CE friendly with those 4 room auto-ships. This would've made it do more damage, which I didn't want, so I was going to try and counter that with a large radius and less crew damage per hit. In the end, I just ended up doing four normal shots and increased the shield piercing. No fancy upgrade for AE.

I just noticed this while using your ship ingame.... theres no door to vent O2. I use that to kill invaders and put out fires. Could you add atleast 1 door to space? I would do it but i cant mod doors until Superluminal is done.
Top

There are two doors that vent to space. Look closer at the back half of the ship.

Wow now i feel stupid, i guess playing FTL while drinking isn't the greatest idea lol. Thanks for the reply RAD. Although there is one more thing i wanted to ask you about. It seems like the missile launcher isn't attached to the ship, like its to far towards the front. If anything i'll live with it though, usually these minor tweaks i make myself. If you want to update, awesome! If not.... awesome work anyway!
Top

ScubaSteve3465 wrote:It seems like the missile launcher isn't attached to the ship, like its to far towards the front.

I sort of see what you mean, but I won't change it. I used the same location on the ship to mount the weapons that the enemy Rock Assaults use, so if you come across an enemy Rock Assault, it should look just as bad.

I gotta say I really like this little ship. The small size works well with slow rockmen, and the artillery is quite useful without being OP.

IE: when the artillery fully charges up and is about to kill a 3 room drone, the game freezes, hard-lock. Have to use activity manager to close it.
Top

Kaerius wrote:I wonder though... is the artillery the cause of my crashes against some 3 room drones?

Yes, that is causing the crash. I originally had the artillery doing 5 shots before Advanced Edition came out, but when I updated for AE, I reduced it to 4 shots because I knew CE had 4 room ships. I was unaware of the 3 room ship until Russian Rockman recently mentioned seeing it. All I can say is to turn the artillery off when you fight the 3 room drone. I should put a note in the OP about it.

Well, that's that solved. I beat the Federation Flagship on my Bahamut run btw, truly a lovely little ship, once I figured out the crash cause and avoided doing that. :p
Top

Updated ship to use a couple of new weapons that I added to my recently made weapon pack.

Man-Eater Missile replaces Hermes Missile; the Man-Eater does one damage instead of three, but requires less power, fires faster, has a little more fire chance, and does more damage to crew.

Heavy Pierce Chain Laser I replaces the Heavy Laser II; it's hard for me to know if this was a nerf or a buff. It requires less power and fires faster, but your first shot will only do one damage instead of two. After that, it gets stronger, up to four damage.

These weapons have the same stats (except rarity) that they have in the weapon pack, but I colored them differently specifically for this ship to blend better with the hull. Unfortunately, I forgot about the glow around the ship, so I guess it didn't turn out as well as I had hoped.

If you don't want these custom weapons, I've left version AE.1 up.