EDIT: If anyone ever wants to make a 3d model of this ship for any reason, keep in mind that the sprite is not accurate at all from a perspective standpoint. To better make some feel parts cylindric i had to use some tricks that made the sprite appear as if it's seen both by axonometric and perspective points of view at the same time. I guess it could be considered as kind of a cubist sprite... so the point is, don't go crazy over it. If you were to build a model out of this current sprite, the ship would be bent as fuck.
Thus, if you need to, feel free to contact me. I'll answer to any questions you might have regarding what i had in mind. 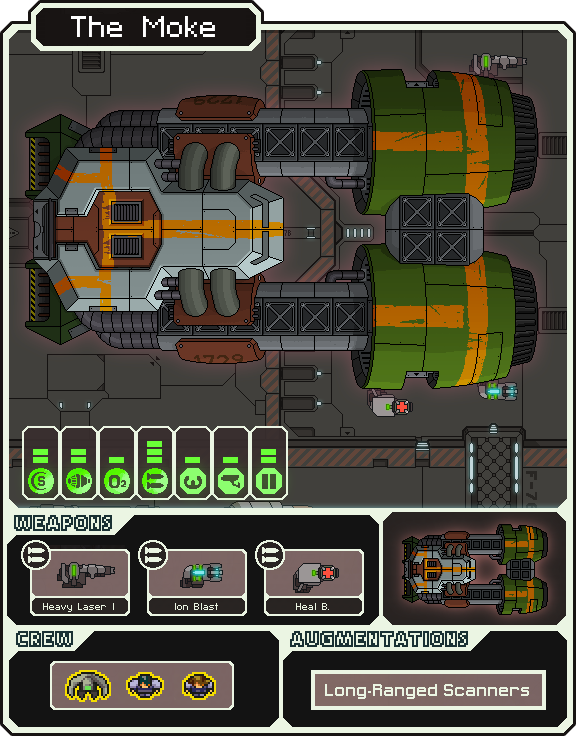 The Moke (Human Freighter)
An aged cargo ship. This vessel was designed for short interplanetary trips, but its sturdy build allowed it to be easily refitted to withstand FTL jumps. 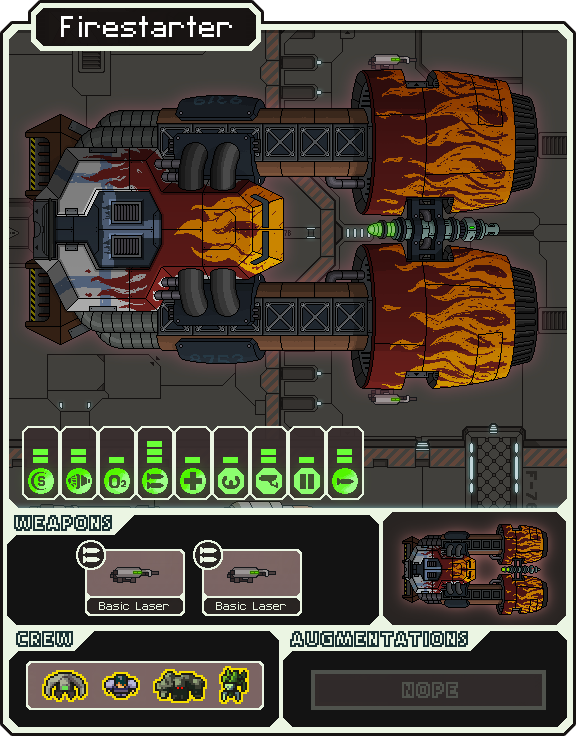 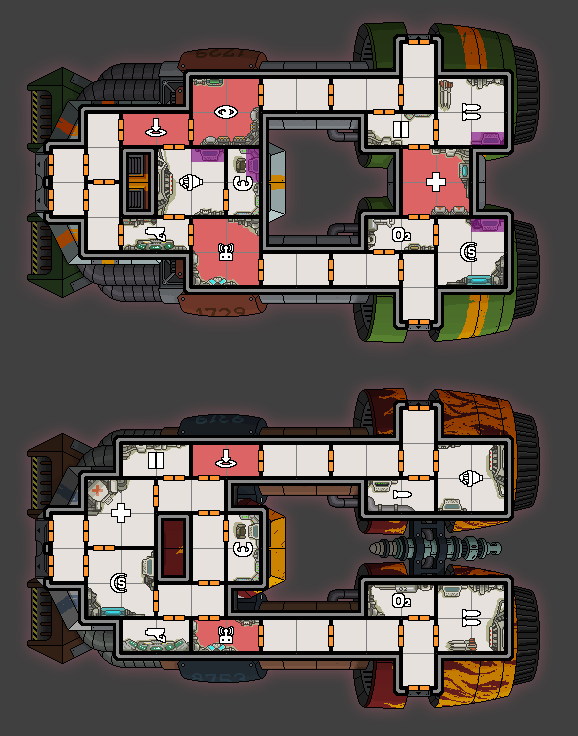 The Moke starts without a medbay, so i gave it a Heal Burst bomb to compensate for that. If you buy it from a store, though, it will be able to heal up to four crew members at once!

The Firestarter was meant to have only two available weapon slots but, partly because of UI issues and partly because the ship *might* be a little bit underpowered, i chose to add a third slot at the last moment.
The artillery laser too was meant to fire five shots, but i nerfed it because i haven’t had the chance to playtest it very much and i was afraid it’d be overpowered.

I've drawn the ship's exterior from scratch using original ships as references. To make the gibs and interiors I used parts of existing images from the game files.

I really appreciate feedback and criticism, so feel free to give me your opinions! If you have any advice for me i’ll be sure to take it into consideration. : )

- Bren Tenkage's run with the Firestarter!

- You need Slipstream Mod Manager to install either of the mod packs.
- You can use a Savegame Editor to edit your savegame and unlock the needed ships. (But use it parsimoniously!) (Also backup your savegames!)


Special Thanks to:
- DryEagle for the support he gave me in the IRC channel.
- VanguardOfValor for both his ship-making introductory video and making a let's play with my ship.
- Bren Tenkage for his run with the Firestarter.

Also thanks to the forum's community for the awesome tutorials and all the feedback given. : )


Changelog:
2.2:
- The Moke now replaces the Kestrel again. (this fixes the cloak not appearing in shops)
- Firestarter now replaces Fed. Cruiser A. (this gives the Nisos my artillery laser. Just ignore that!)

2.0
- Added "Firestarter" ship to the pack.
- Ships now replace Fed Cruiser A and B.
- Slight modification of the Moke's gibs.

1.3 (Kestrel-replacing version with no B layout)
- Slight modification of the gibs.

1.2 - download: Kestrel A
- Added mod metadata for Slispream Mod Manager. (many thanks to DryEagle for helping me realize what i was doing wrong while trying to add it)

1.1 - download: Kestrel A
- the name of the ship is not "The Abiding Moke" anymore.
- changed ship description a little.
- fixed engine room interior image being one pixel off.
- made a proper UI icon.
- replaced original shield with a proper one.
- modified room layout a little, teleporter and sensors rooms are now 2x1, allowing for better no-oxygen overlays.
- modified crew from (1 slug, 1 rockman, 1 human, 1 engi) to (2 human, 1 engi).
- minor base image tweaks.
- ditched Kestrel B layout duplicate.

I like the looks of the ship and stuff, you did a good job, didn't try the ship yet though.

1 thing is due to the shields shape, the impact will not be where the shield look like it covers and also may even provide no protection for some rooms if they stick out of the real shield ellipsis.

Besides that I think the ship looks pretty unique and cool.
R4V3-0N, a dreamer.
Top

Welcome to the forum Taxi Service

I gotta say: That is one sexy ship you made there! Probably one of the sweetest non-spliced hulls I've seen here so far. The design matches FTLs style perfectly, but you also put in a great unique touch. I especially like what you did with the gibs, the panels that fly off and stuff, that's a great idea. Layout and floor plan also seem well thought out.

Oh hey! I wanted to make a remark about my nickname: It's not a ripoff of yours! I've been using it since 2007 because of reasons. It's weird in a good way to see somebody with "service" in their nick too!

Anyway thank you very much! I take the chance to compliment you on the Captain's Edition as well! I considered using some weapons from that pack but i'm not really familiar with what they all do, and I haven't looked into weapon exportation yet (if that's even a thing). If any of you can think of a good combination of weapons/systems for this ship that'd be great!

R4V3-0N wrote:due to the shields shape, the impact will not be where the shield look like it covers and also may even provide no protection for some rooms if they stick out of the real shield ellipsis.

Oh crap, I didn't know that. I wondered why everyone used elliptic shields..! I'll see about fixing that up. : ) Thanks for the feedback.

EDIT: PS: I suck at making names and stories up, as you might have realized

I'll definitely have to try it out soon. For your first foray into modding, it certainly looks you're off to a great start!
Various Valorous Videos, should you be interested...
Top

Thanks! I actually am a kinda seasoned Halo 1 modder. That doesn't have much to do with FTL, but i've always been prone to modding in general, i guess. Also i have some experience with graphic tools, and drawing stuff with pixels is something i find particularly fun!

Updated the mod to version 1.1. Here's the changelog:
- the name of the ship is not "The Abiding Moke" anymore.
- changed ship description a little.
- fixed engine room interior image being one pixel off.
- made a proper UI icon.
- replaced original shield with a proper one.
- modified room layout a little, teleporter and sensors rooms are now 2x1, allowing for better no-oxygen overlays.
- modified crew from (1 slug, 1 rockman, 1 human, 1 engi) to (2 human, 1 engi)
- minor base image tweaks
- ditched Kestrel B layout duplicate

And sorry for double posting..!

Danke! I'm considering doing a B layout that would include an artillery weapon of some sort. I'm currently trying to figure out how to make that work, though. Is it possible for my ship to have a different artillery weapon than the fed cruiser without modifying the fed cruiser's artillery beam? Is there any documentation about this that anyone could recommend to me? : )

Also i've updated the .ftl again, it now includes metadata for SSM. (thanks to DryEagle for helping me realize what i was doing wrong in packing the .ftl) (i was trying to compress the img, data and mod-appendix folders within another folder :V )