AE-compatibile update released! Many thanks to featherwings for wrapping it up. : )

featherwings wrote:New Features
- AE compatibility. Not only has the testrel been updated to include slots for all of the AE systems, but the images have been fixed so it once again looks like a proper ship.
- AE environments (pulsar, PDS friendly/enemy/all) have been added to the environments list.
- AE ships and layouts (including the Lanius) have been added to the fight a ship list.
- Lanius have been added to the fight borders options (six lanius boarders are incredibly scary).
- Spawned ships have had their minimum values brought up so even though you're still in the first sector, hard ships are equipped as if they were in later sectors and pose an equivalent challenge.
- The "get resources" tree has been expanded to include autorewards in standard, stuff, and item flavors (and each can be run once or ten times.)
- "get resources>I want a specific item" will display up to 30 different weapons, drones, or augments and let you pick any one, great for finding items or seeing how common your items actually are.
- Many more wonderful ways to die and/or wreck your ship, including asphyxiation, immolation, and well armed target practice drones

Lemme know if you see any bugs, grammar errors, textbox overflows, or have any other questions, comments, critisisms, or feature requests!

Known bugs:
- the MTE's gotten a little big, so when you first load the sector it takes a few seconds longer than normal. :/
- If you fill your cargohold by more than one item, you can only access the most recently dropped item. That's on FTL's end, though.

I'm currently working on adding even more options, such as giving the possibility to spawn boarders and an enemy ship at the same time, more resource management options and more.


EDIT: This is an optimised development version. The enemy ship spawning event is obsolete, so if you're looking for a good enemy ship fight i advise to use MTE 1.2 instead, but i've added more useful functionalities like a systems picker! Download this if you have problems with the main version, or if you want to help me update it by writing a better ship selection tree! :P
MTE 2 beta, build 382 (direct dropbox link)
MTE CCP 2, v0 (direct dropbox link)

If you're interested in the old version of the mod, check the obsolete thread down below.

MTE is a mod that gives users more direct control of the game's events. It was made to help modders that need to test specific situations. If used in conjunction with the Custom Content Patch (aka CCP) it also allows you to easily test your own events, weapons and edit an enemy encounter!

All the empty beacons will spawn an event-picker event that gives you some options on what to do. The possible choices are these: 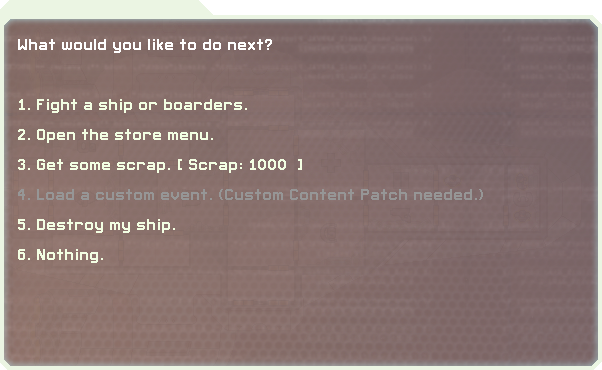 (in this picture the CCP hasn't been loaded. MTE can work by itself, but to use some options you need to load CCP as well.)


This is the menu that lets you spawn boarders or enemy ships. You are also given the option to spawn an environmental hazard before picking an enemy. 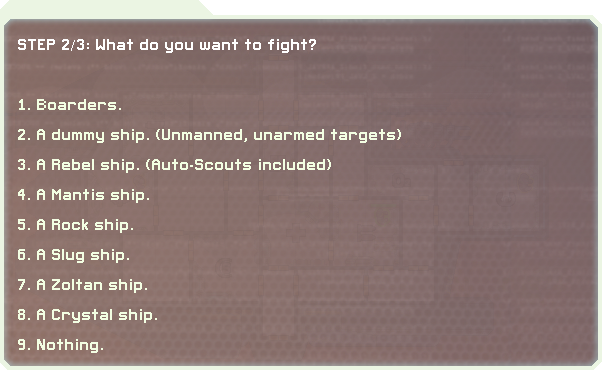 The dummy ships are a special class of enemy ships made with the purpose of weapon testing. The first dummy is a one-shielded unarmed target, the self-repairing dummy is a ship with an indestructible drone system equipped with hull and repair drones that will continuously repair its systems and hull. The custom dummy is a special ship that you can edit using the CCP. More informations below. 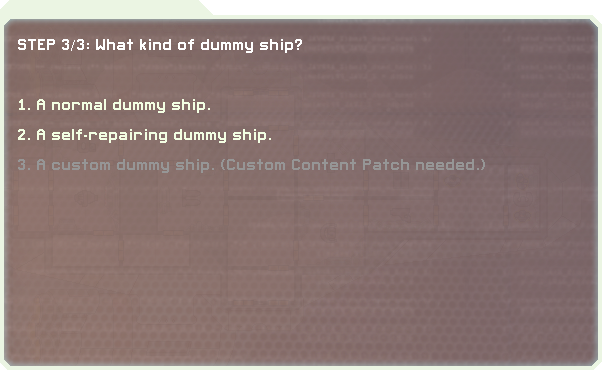 (After loading the CCP the third option turns blue allowing you to pick it.)


This is the boarders menu. You'll be able to spawn 2, 4 or 6 boarders of the chosen race. 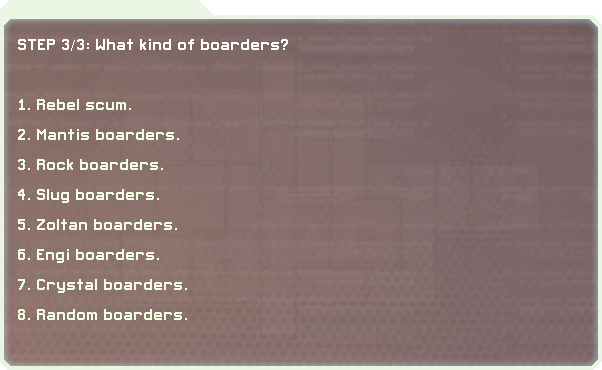 You can also open up stores at any beacon. You're given 1490 scrap at the beginning of the game, but if that isn't enough you can always grab more scrap at any other beacon. Doing so will not "consume" the beacon, and you'll still be able to pick any other option without leaving.


You're even given the option to get your ship destroyed! It's great for masochists or modders that are trying to test their ship's gibs. These are the options presented to you past the suicide-confirmation screen: 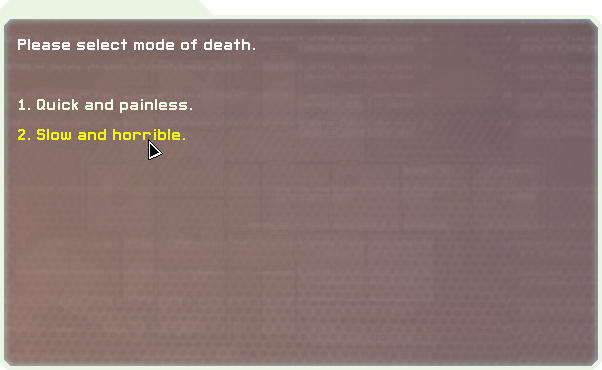 The Custom Content Patch, a .zip containing three files that integrate with MTE to help you spawn your own custom content. After editing the .xml.append files, just make an .ftl containing them and load it after MTE. When loaded successfully, all of MTE's greyed-out options will become blue options instead.

More specifically, it contains what i refer to as the Event Loader. If you manually modify the contents of events.xml.append you can trigger specific events! This is how the code looks: 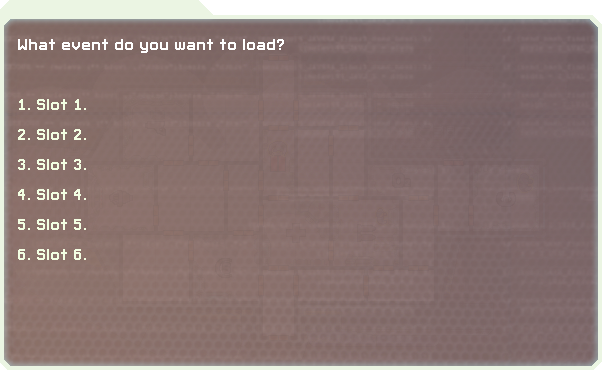 Another addition of the CCP is the Testrel. It's basically a kestrel with different graphics and maxed out systems, and it can be used to easily spawn with your custom weaponry and drones by editing blueprints.xml.append. It replaces the Kestrel. (If you don't want to use this ship for whatever reason, just exclude this file from the .ftl!) 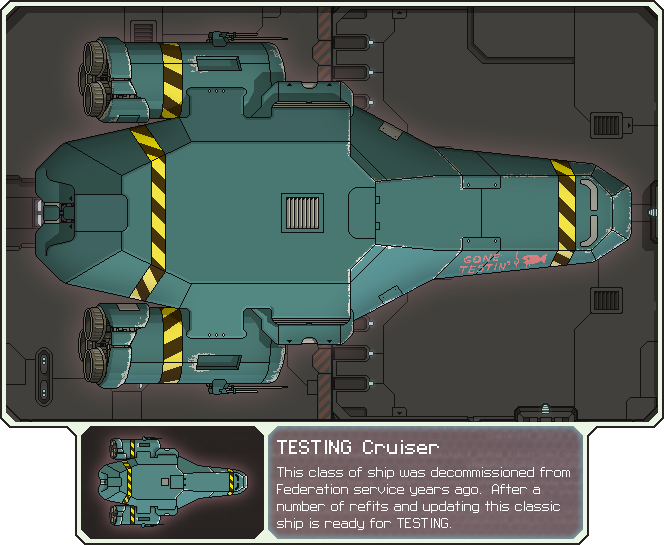 And, last but not least, the custom dummy ship. It's simply an enemy ship that can be edited easily to match your needs. By editing autoBlueprints.xml.append you can add up to four weapons to it, modify its crew, and even make one of its systems indestructible! You can then call it in-game by going in the dummy ships menu and selecting "A custom dummy ship".

Take a look at its code! It's super easy!


On top of all of this, the rebel fleet advance has been disabled and, if you reach the exit beacon, the sector will reset itself allowing you to test indefinitely! : )


Let me know what you think of this pack! If you have some ideas and want to help out, feel free to look at the code and edit it yourself! If your additions are cool I can add them to the official thing, after crediting you of course. :​P Otherwise just leave a comment, feedback, hatemail, whatever!


Changelog:
1.1
- Changed name from "Ship Testing Environment" to current, since focus is not only on ships anymore.
- Added environmental hazard picker.
- Added boarders spawner.
- Added more "Nothing" options.
- Made the Slug Avenger stronger and removed its crew.
- Added support for custom event loading.
- Added the Testrel.
- Added the self-repairing dummy ship.
- Added the custom dummy ship.
- Lowered shields of the normal dummy from 2 to 1.
- Made fleet advance disabling a little more reliable.
- Used </secretSector> shenanigans to make sectors repeat indefinitely.
- Handled no fuel events, should you empty your fuel reserve.
- Tweaked texts here and there.

Backstory:
It all started with me complaining about having to make a video to show the features of a ship, and how to make it i had to modify the original project to show features that you wouldn't start with. So English Narwhal comes out with the idea of making a series of scripted events that would let a modder test things like fighting a ship, showing their cloak and then getting destroyed. It was a great friggin' idea, and he said he'd look into making it. I was so eager that I started looking into event scripting too and started messing around with them, and after being helped immensely by both English and Kieve to solve lots of problems i've encountered, this thing came out.

Thanks to:
English Narwhal for basically letting me make this and helping me with the coding; and Kieve, with his huge knowledge, that helped me actually making this thing work. ◡‿◡ If it weren't for them there would be no STE.

Features that i might add not anytime soon:
- A menu for free specific vanilla augments/weapons/drones.
- A better rewrite of the entire system that would allow you to spawn boarders and fight an enemy ship at the same time.
- Add some more lines in the custom dummy blueprint to ease up adding augments to it (you can still add augs yourself)
Last edited by TaxiService on Sun Oct 08, 2017 9:10 am, edited 13 times in total.

Very well done. If I had this while I was actively modding I'd have used it ALL THE TIME.
My Videos - MY MOD HUB
Simo-V - The Potential - Automated Scout - "Low O2" Icons
The Black Opal - The Asteroid - The Enforcer - The Pyro

Very well done. If I had this while I was actively modding I'd have used it ALL THE TIME.

Yeah, i wanted to add that earlier but then i didn't. : P

I was using the Mantis Combat console menu from the old Foundation of the Federation for quite some time but now I got something more of the lines of "general" to help myself out.

Can I use the "Test Ship" ship hulls from this mod? I would like to have them as test ships I use when testing weapons or such.
It would make testing weapons a bit more fun.

@MightyKebab: A better question would be why destroying it? It was you that chose to be destroyed by it some moments earlier, after all. Why do you want to kill it now then? It is a very deep question. (psst..! not really! i'm just trying to dissuade you from trying~!)

Anyhow an update is going to be released within 20 hours. New stuff:
- environmental hazard picker
- boarders spawner
- event-loader event (to be used in conjunction with an .ftl that the user will have to assemble)
- more things but i don't remember. (it's probably interesting stuff, i just can't remember jack right now because: sleep deprivation)

This mod appears absolutely orgasmic. Is there a way to spawn the Rebel Flagship? If there is, feel free to take my heart, my love, my mod, my cereal, but not my copy of FTL.
If space is our final frontier, then I must perform my duty of finding a way to make our stand, extremely and utterly ridiculous as well as absurd. - Fleskdawson 27/1/14 before being stranded in a cereal box orbiting the Mantis Home worlds.
Top

You can recreate the rebel flagship minus the artillery and other stuff, and make that attack you.
You can not exactly make a short cut to sector 8 and do it though.
R4V3-0N, a dreamer.
Top
Post Reply
58 posts

Users browsing this forum: No registered users and 59 guests