Distribute and discuss mods that are functional.
Post Reply
36 posts

Bug report: On this mission, any attempt to target that blobberling or even just selecting it crash my game.(Targeting the adjacent tile with siege mech works though)

Edit : Killed the blobberling by targeting adjacent tile with siege mech. Next turn, new blobberling appeared and selecting or putting cursor on it again crash my game. 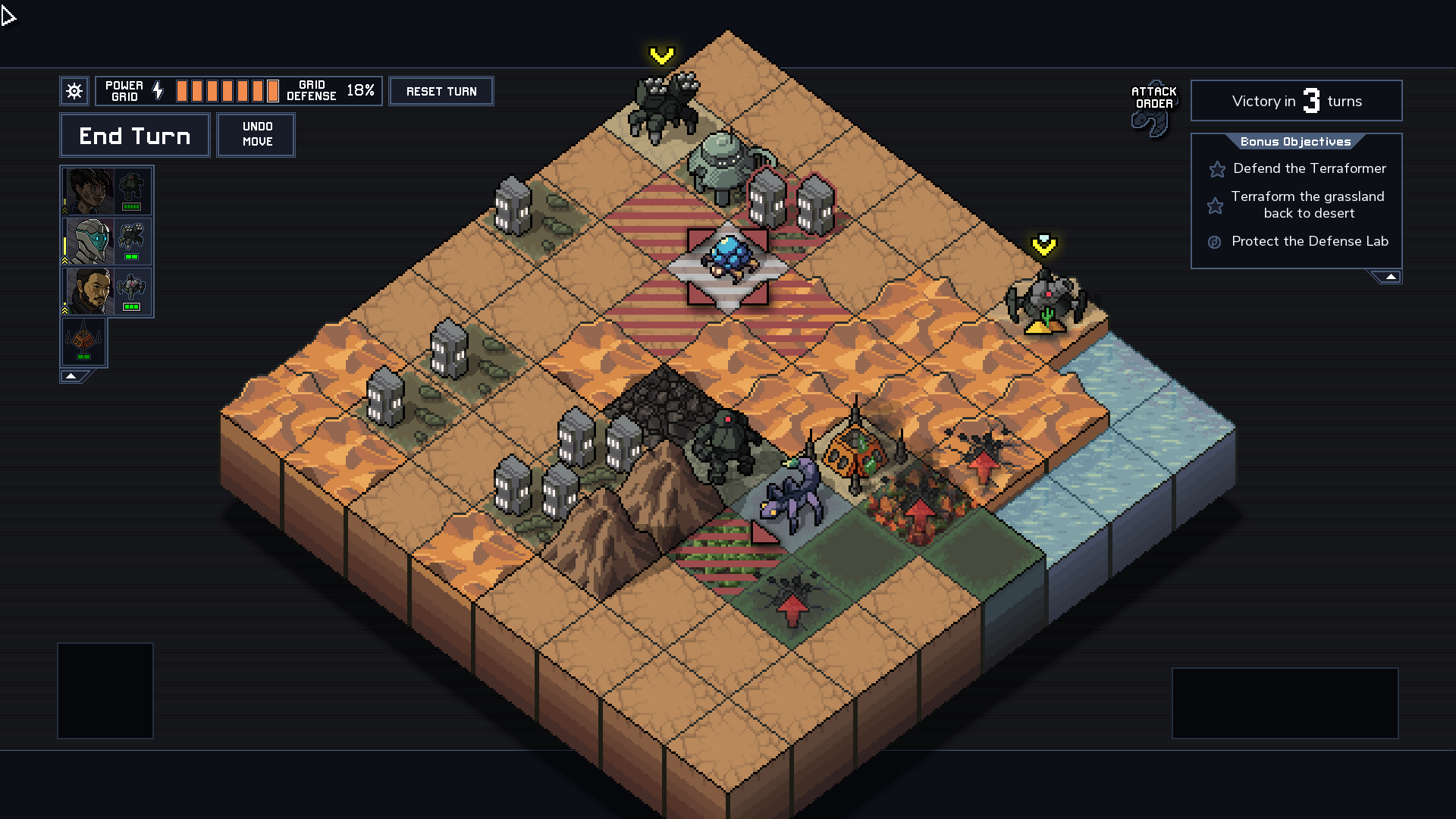 Figured I'd post some more Garden Psion thoughts here, rather than the Discord, so that they're easier to ignore if you choose

Regarding 1.3.1 Garden Psion that deals "fire damage". I still haven't played it yet, as I'm in the middle of a bunch of testing runs for other stuff.

My understanding is that the pros are:
- Communicates to the player that they don't have to worry about vines killing fire-immune NPCs like the train and convoy.

In my view the cons are:
- Vines dealing "fire damage" is thematically weird.
- Calling it "fire damage" is mechanically weird. I wouldn't entirely know what to expect from this. I'd expect it to go through armor and not double, which it sounds like you can code, but...why doesn't fire damage actually SET units on fire? Why doesn't it light forests (I assume vines have never lit forests? Never checked)?
- It gives one squad (Behemoths) an advantage. And they already largely ignore the armor psion, too.

Other ways I could think of to deal with the original NPC issue, along with some pros/cons:


A: Remove "fire damage" from the psion, and instead hack the relevant NPCs to give them a new status immunity, "vine immunity".
- Pros: The psion text gets simpler. The vine damage gets more thematic. Flame Behemoths are more balanced. Units (including other mods, I assume) can be given vine/fire immunity independently.
- Cons: Harder to code (I assume). Harder to for other mods to code (I assume). Creates a new status for players to read (I view this as a minor con, but others may feel different). Modifies NPCs that players are used to.

B: Remove "fire damage" from the psion, and have its text say "does not damage NPC units".
- Pros: The vine damage gets more thematic. Flame Behemoths are more balanced. Simple.
- Cons: Essentially creates a status without an icon (not an uncommon thing for mods, but still).

C: Remove "fire damage" from the psion, and just let players deal with it as far as trains/convoys.
- Pros: The psion text gets simpler. The vine damage gets more thematic. Flame Behemoths are more balanced.
- Cons: Maybe less balanced and more frustrating. Although since you made it easier to "wall off" the vines, maybe it's okay?*
*Could you adjust the psion's targeting scores so it stays farther away from NPC units? Would ensure players had a turn to get between vines and NPCs.
Top

Thanks for the feedback.

Added some tutorial tips to convey some unique behavior instead.
Top

If anyone has any issues, I'll try to sort them out as soon as possible.
Any feedback beyond that would also be great.
Top

Minor typo: Needle Spine (weapon) has it's in the description, should be its (the word is an exception to the usual apostrophe-for-possessive rules; a very annoying exception).
Top

Thank you tosx, I always get those mixed up.
I'm sure there are some bigger bugs though, so I'll wait a little before updating.
Top

Another question/comment, the Kaizer Blades (weapon) doesn't preview bump damage if the center tile is empty, even if the two outer tiles have units and they will take bump damage. Haven't poked through the code, but since neither ends up in the middle I'm guessing you're doing something behind the scenes. I know at one point I messed with a version of the Eclipse Force Mech's weapon that pulled units toward an empty space and I think I was able to get a proper preview by doing something like:
A) Setting up pushes as normal
B) During actual execution, spawning an invisible unit in the middle space

I may be misremembering, but if you want the code I can try to dig it out.

ENEMIES:
Floater, lmn_FloaterAtk1: its, not it's
Top

Edit: This version seems somewhat unstable, so I must take a closer look at it before 2.0.2 will be ready.

Version 2.0.2 is up.
Rare somewhat problematic issue with Kaizer Blades has been fixed.
Typos are hopefully solved now.
Weapon previews of Techno-Roach and Techno-Crusher has been improved.

Thank you for liking the mod!

Your experience is quite curious. In my tests (with only BnB enabled) the Passive Auto-Shields does in fact work after the first attack, shielding for the second.
Maybe there is a mod incompatibility somewhere?
If you want to, I could look into the issue for you, but I would require a bit more information about your current setup. You can find me as Lemonymous#6212 on discord for a bit easier troubleshooting.
Top
Post Reply
36 posts