After getting bored of the lack of Zoltan ships and stations, even in CE, I decided to create a Large Energy Station and an Energy Cruiser. They don't have outer glows yet, besides the glows on some pieces from the Zoltan Cruiser that don't need their glows removed. I didn't realize how large the Energy Cruiser was until I compared it to the Flagship (it is just a bit smaller than the Flagship), which makes me undecided on whether it should be an enemy cruiser or a player cruiser. I am new to modding FTL ships, but if I can (I assume I should be able to), I will probably add a quintuple ion stunner artillery to the semicircle at the top for a layout of the Energy Cruiser, whether or not it is a player cruiser or an enemy cruiser. Gibs, preferably custom if possible, will be attempted after the attempts to get these into the game succeed.

Feedback on whether the cruiser should be an enemy cruiser or player cruiser is requested.

For anyone interested: the cruiser with a quintuple boss ion-- http://i.imgur.com/Eaxai9c.png --for example of what it should look like with an artillery system
Top

The Energy Cruiser needs to be more asymmetrical.
The station is fine though.
Top

No amount specified of how much more asymmetry is needed = asymmetry on far left and right sides of the ship (and with weapon mounts), but the central engine area stays the same (with possible exceptions via pipes).

I'll get to that after the quintuple ion stunner artillery is working and the first version of the ship is in the game. Thanks for the feedback, I completely forgot about the Zoltan asymmetry when making the design. Don't worry, though, the rooms layout I made for it is very asymmetrical and messy (also containing 6 and 10 tile rooms, because it is that big of a ship) (and I haven't touched the station yet for modding).
Top

No amount specified of how much more asymmetry is needed = asymmetry on far left and right sides of the ship (and with weapon mounts), but the central engine area stays the same (with possible exceptions via pipes).

IIRC the Zoltan architecture is rotationally symmetric, with 120 degrees between each major component. The lego model below should help illustrate what I'm talking about: 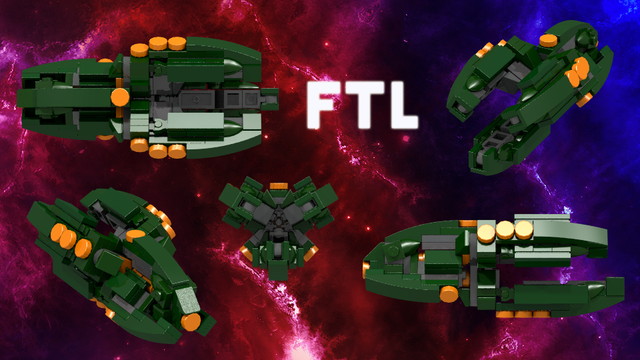 I think I'm gonna need to make a new weapon pack just to accommodate this animation.

I have improved and desymmetrized the energy cruiser, now called energy_dreadnought, and I created an energy_tug. They are not in the game yet, and both still have no final glows. I also made a prototype ion stunner artillery animation (and sliced it into each individual cannon for testing purposes, to work towards the possibility of a better final product in certain ways...). That however is one very impressive ion stunner. I wouldn't want the business end of that thing if it was mounted on the Flagship or something.
Top

steamtex wrote:Alright, I think I'll just dump this here for people to screw around with, rather than giving it a proper release. I got lazy.

Aaaaaand the link doesn't work anymore. RIP my hopes of releasing these myself.

About month ago I made this. Making ships is so stress relieving!
My tablet broke so it took a little longer than usual. I have yet to do the gibs -and come up with a better playstyle possibly- but it's basically done. (edit: also no miniship) the design is a mashup of the Toybox and Toybox2 ships from an anime about spage-garbage collecting. Those were lovely ships and this hull in comparison is kind of a turd, but i didn't want to recreate those ships. Some of their design elements are amazing imo, i just wanted to use some of them.
I wanted to make a room layout that had both symmetrical and asymmetrical portions, divided into three "sections". (although this last iteration has airlocks giving additional entry points between the back and mid sections.) The writing on top and sides says "research ship" because it's a sciency-exploration-kind-of-ship. >_> (thx to google for chinese translations)


...i don't know. I think i'm going to release my FTL projects folder with some sort of creative commons license so that somebody can actually do something with my stuff. D: i've got like four ships waiting to be released that are almost ready but i don't quite like yet. >_< hopefully somebody with better skills at gameplay design than me can put an end to their development stage. : \ would anyone be interested?


EDIT: actually, here is a link to this ship. I would probably change the name, ship class and weapon/drone limits before releasing it. I'm feeling it should have 2 weaps and 4 drone slots rather than the contrary... also the ship class clips through the UI so that has to change, but give it a try!