You don't need to worry about it. Actually that issue is even present in vanilla FTL and it doesn't affect the game.
Some of my FTL mods you may like, or hate, or... yeah:

Yes, and I have not had time to fix it yet. I will probably update it in the next few months or during summer.
Some of my FTL mods you may like, or hate, or... yeah:

Since FTL now uses more icons instead of text in the UI, Stations Job could also use some new icons. So here's a small poll, where you can vote on what sort of icon you'd like to see in SJ, replacing the ship management icon (or write that you don't currently like any of them).

Poll here: http://pollmaker.vote/p/DUQ9WAHX
Some of my FTL mods you may like, or hate, or... yeah:

Glad to see you're still updating this mod! That's awesome

and looking forward to it!
Top

Great mod, i honestly like the one which looks most like a fed station but i see people are picking much more weird looking ones. (the UI thing i mean)

Great that you are still working on it, might release one or two more station ships in the future
Top

Updated mod to 1.1. Since there are some changes to items and trading (FTL finally allows to remove augments via events!), I hope that everything is balanced, haven't had time to test much yet so feel free to tell me if something is very off.
Some of my FTL mods you may like, or hate, or... yeah:

found a bug in the tutorial, where engines/thrusters are manned when they shouldn't be: 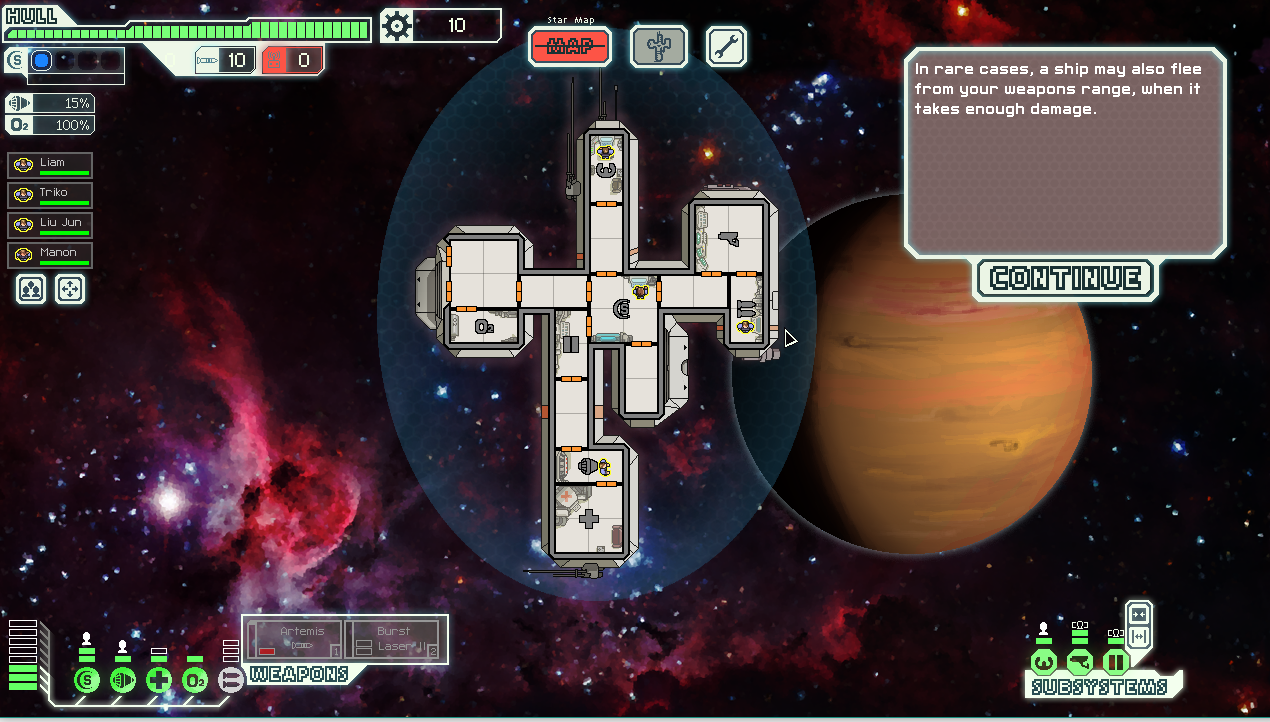 the problem lies in the code for the tutorial station:

however, this bug is minor compared to a larger problem -- upon completion of the tutorial, subsequent plays of the tutorial are impossible as after the first event chain, the upgrades screen shows up and cannot be closed, blocking access to the map to continue the tutorial: 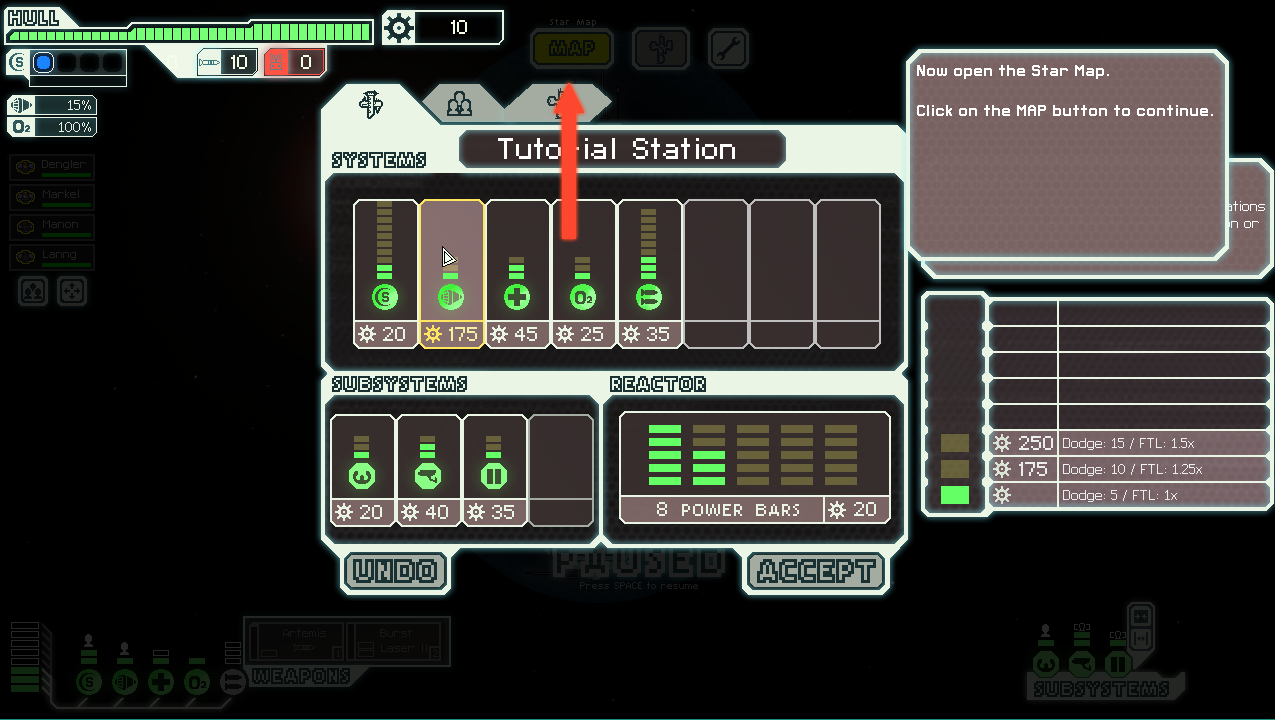 I presume the cause of this is that at the end of the tutorial, the upgrades screen is never closed, which causes it to appear when a new tutorial run is started (because it's the same ship, the tutorial ship). I did notice though that continuing an existing game (and probably starting a new game too) after a tutorial run then going into the tutorial will avoid this problem, presumably because a different ship is then loaded and the tutorial ship is "refreshed".

other than these bugs though, I've been enjoying the "time attack" mode... chose the quickest option and then got crushed when the lead rebel fighter came. I'll just have to try again -- I'm eager to know what happens if you win that fight!

my favorite bit about this mod is that it looks like all the weapons are vanilla, but upon further play I discovered that isn't quite the case...!

also... any plans for a replacement to the Slug C? all the other ships are replaced with stations except for this one... which by itself is quite an impressive achievement!

Thank You! By looking at the image I also noticed that the upgrade menu tab shows a different station icon which I forgot to change. And yes, I am working on Slug C, which has been unfinished for a year and a half now.
Some of my FTL mods you may like, or hate, or... yeah:

I'm releasing the next and possibly final big update some time this or next week so let's discuss what's new and what last changes I am still making!
Most importantly, the slug station C is finally complete [https://i.imgur.com/iURxZI0.png] and all 28 ships are now replaced with stations! Secondly I've decided to restore mannable engines in the form of an addon: SJ Thruster Terminals Tweak will be released alongside the update.

I've also made some changes to the stations' equipment. For example, the Engi and AI station switched some drones, Zoltan C and Rebel C switched their beams. Among other things, I made the standard Federation artillery purchasable for the Rebel stations if you have a mod that makes it appear in stores. Currently CE adds Artillery to stores, but it has had no use in SJ which always disables it when patched and I didn't find any mods that would enable it afterwards without changing anything else. If I would let CE enable it, then a meaningless system would appear in the store for other stations. So I thought about workarounds to deal with this:
- Let CE enable Artillery and let people apply the CE Artillery Remover afterwards if they want
- Create an explicit Artillery enabler addon (currently favouring this idea)
I could let other stations buy their respective CE Artillery weapons, also requiring CE for the system to appear in stores. Then again, many stations won't be able to fit an Artillery system very well so it won't be much use to them. The Zoltan stations already have some system rooms overlapping...

I don't know whether it was some FTL update or me not noticing it in 4 years, but apparently the enemy ship crew sizes didn't increase with the rest of difficulty so I changed that as well (Boarding stations were genuinely overpowered...) It should be harder to kill the crew of the final boss now as well, as it got 2 new systems.

The temporary item slot is no more due to changes to over-capacity situations in FTL: When you have 4 augments and receive another one, it will be broken into 25 scrap instead of replacing the last one. That's why switching focuses now costs exactly as much, to avoid abuse.

mr_easy_money wrote:however, this bug is minor caompared to a larger problem -- upon completion of the tutorial, subsequent plays of the tutorial are impossible as after the first event chain, the upgrades screen shows up and cannot be closed, blocking access to the map to continue the tutorial:

Turned out this was the part in FTL, where you needed to upgrade weapons to continue. It seems that you can fix this by restarting the tutorial from the settings menu though.

That's pretty much all of the big stuff, of course expect bug fixes and some rebalancing too.
As a last thing I wanted to make the mod's original post a bit more attractive and the mod easier to grasp so I created a poster of sorts for it. Please tell me what you think and whether I should tweak something or not! Does the text sound too much like a bad poem? Maybe more highlighting of important details on the first page instead of a poster or maybe there's no need for anything fancy at all? [https://i.imgur.com/91mH6o2.png]
Some of my FTL mods you may like, or hate, or... yeah: