This mod adds a custom chess themed squad to the game.

A video playthrough of one map: https://www.youtube.com/watch?v=Fv5E7R6q9m0 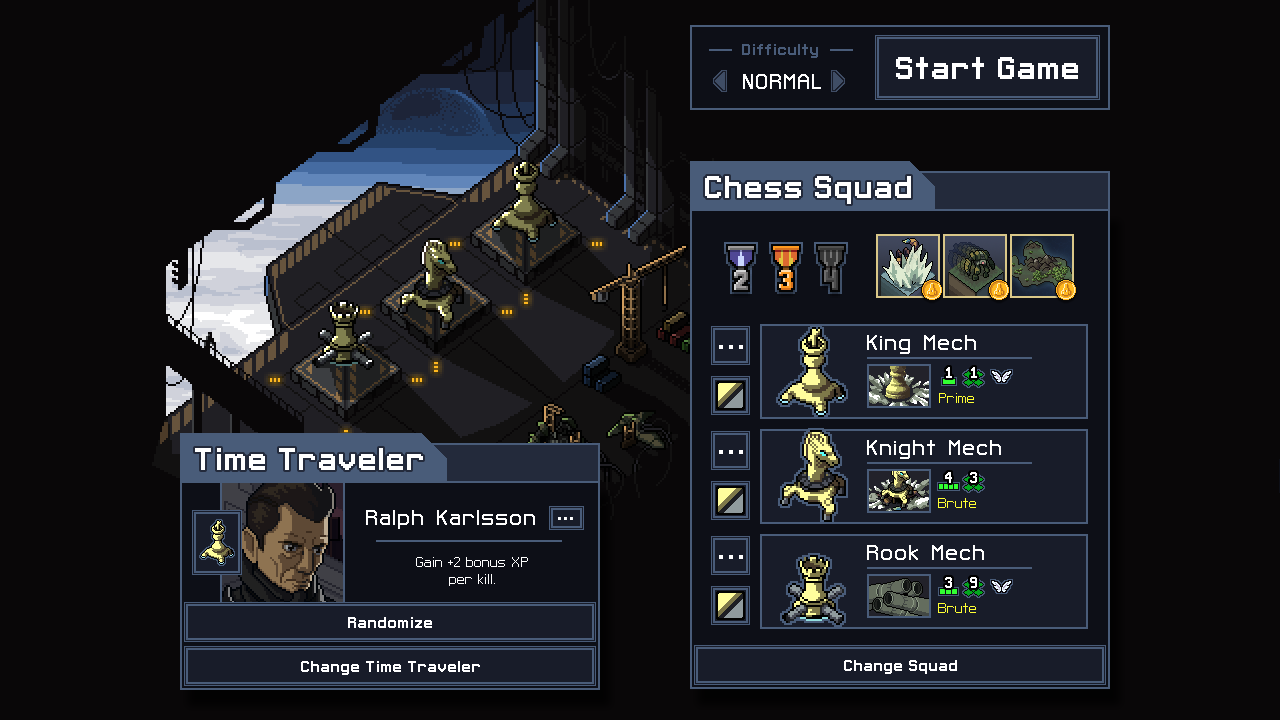 King Mech, prime class
Can only move to one of 8 nearby tiles, same as chess king. Flying.
Weapon: Spawn Pawn
Deploy a pawn at target location. You can have up to two pawns active at a time.
Upgrades are:
Explosives for 2 cores. Pawns explode when killed, dealing 2 damage to adjacent tiles and leaving smoke cloud on own tile.
Push for 1 core. Pushes tiles adjacent to target. 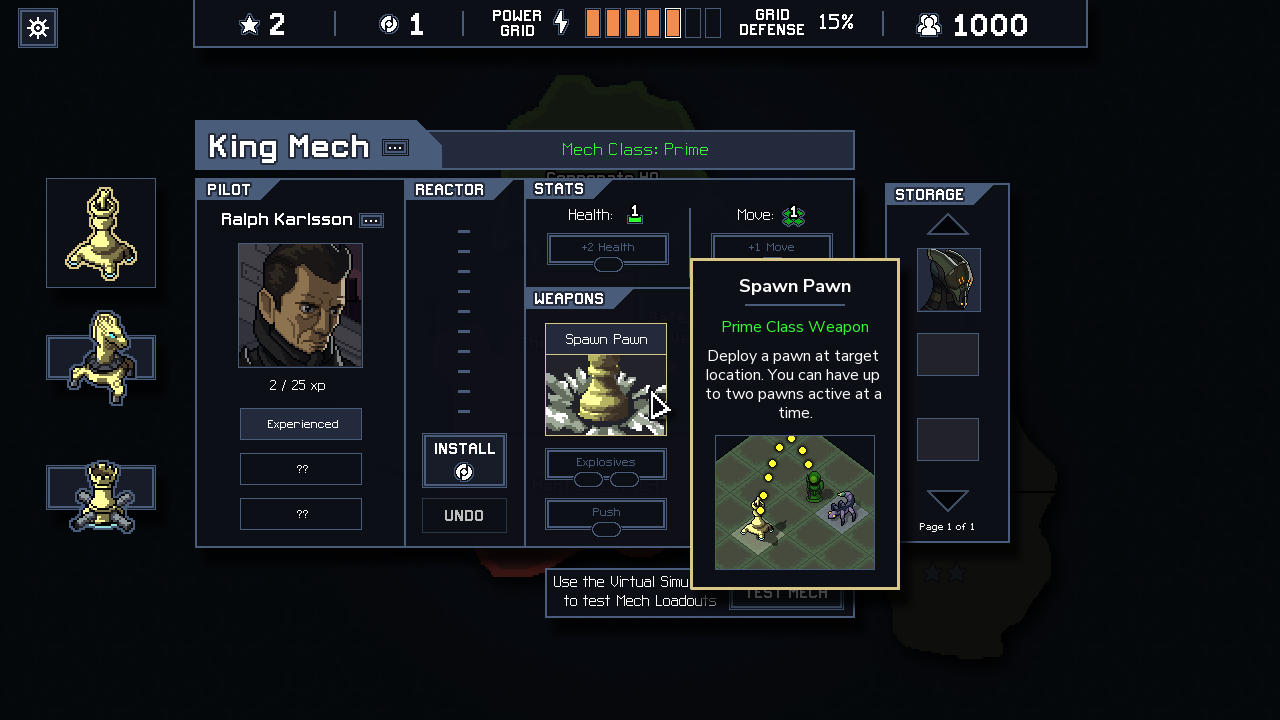 Knight Mech, brute class
Can only move in L pattern, same as chess knight.
Weapon: Knight Smite
Jumps to a location, killing any unit unfortunate enough to be there. 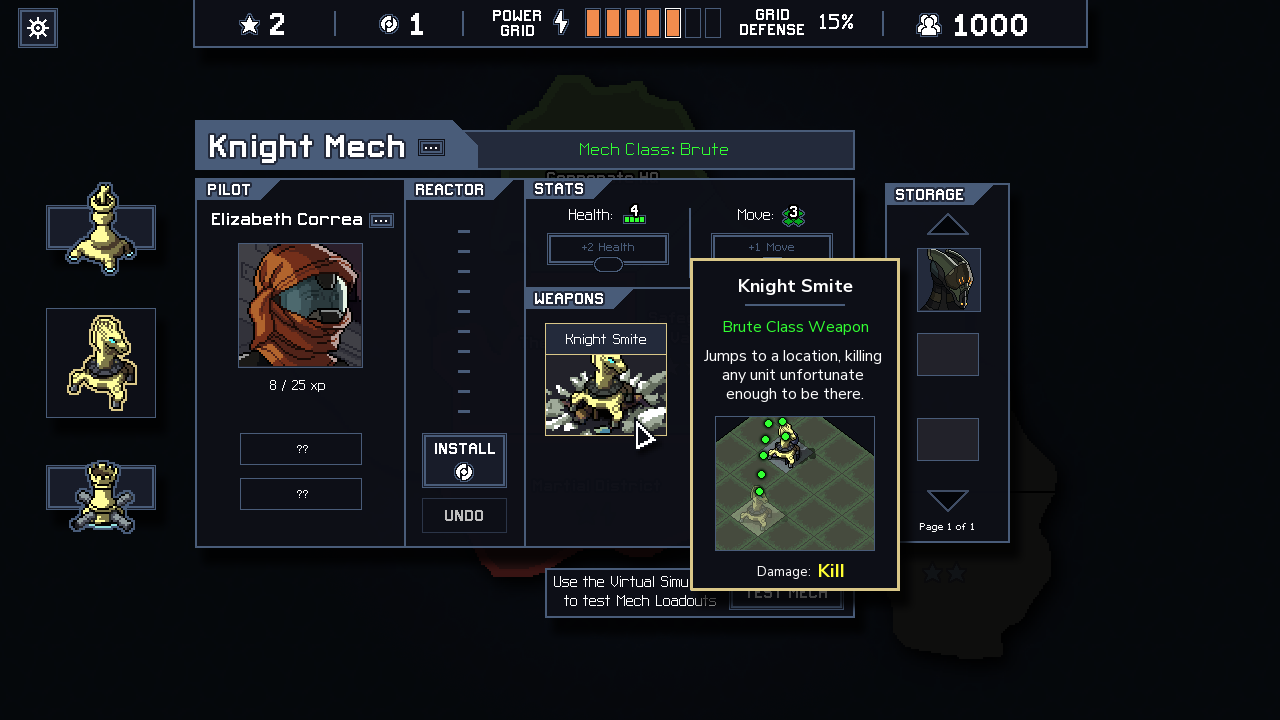 Rook Mech, brute class
Can only move in straight line, same as chess rook. Flying, so can ignore obstacles.
Weapon: Cross Cannons
Fires a projectile in all 4 directions, damaging and pushing on impact.
Upgrades are:
Directional for 2 cores. Fire in three directions instead of four, with increased damage in one direction. Pushes self in the remaining direction.
+1 Damage for 2 cores. Increases damage dealt by 1. 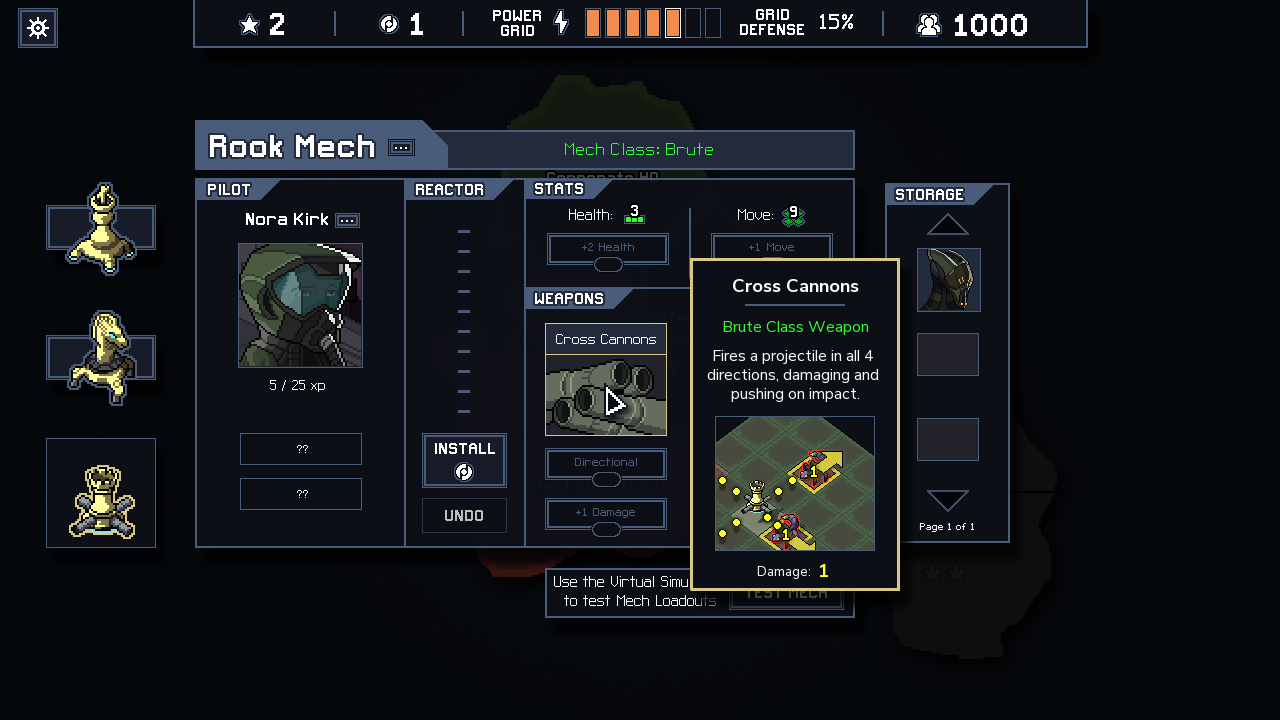 The chess bois are a tough one to rate. You've requested that I rate this squad on the basis that it's intentionally overpowered even though you intend to rebalanced it later, which is fine, but there are other things beyond that which make this an interesting conundrum.


I'm mainly talking of course about the jank. This is a janky squad to play, featuring inaccurate map predictions for the results of some actions and particularly knight movements when you have the movement upgrade on that mech. The way the movement range changes from when you hover over a much to when you click on it feels sloppy and "moddish" (for want of a better word) and pawns being able to pass through things as though they had flying even though they don't, though necessary for gameplay, is certainly counter-intuitive. However... none of those things are actually your fault... They're fundamental modding limitations, so one hand I feel I can't rightly give you stick for them, but on the other hand it still materially worse to be a custom squad that is janky vs being one that isn't. You can see the issue I'm having here...

Then there are the sprites. Custom weapon portraits are always welcome, but the king and rook themselves are a little on the plain and undetailed side, which is odd considering the knight and the pawn are not. A bigger issue though its their tendency to glitch out when disabled and the fact that they have no "iced" version of their sprites (unlike all other mod squads that feature custom sprites thus-far released. However, even those might be modding limitations relating to the (rightly) excessive height of the mechs, so I'm honestly not sure if I can justifiably give you stick for those either!

In terms of fun, though, this squad holds up very well. It actually forms an interesting contrast with the Tectonic Titans that were released around the same time in that while both are hugely overpowered, that squad has a more straight-forward, instant-gratification sort of playstyle, whereas this squad is more the (to coin a phrase) "thinking-man's overpowered", which is fitting considering their gimmick. The rook can be very effective, but has to be deployed very differently to any other mech in the game, modded or otherwise. The king's "carrier" playstyle offers endless possibilities and, unlike the prime mech of the Suicide Squad, actually makes good use of only having 1 hp (granted pilots and upgrades can break this). The rook is somewhat simpler, but still requires thought to put to best use, especially once you realize you can use its attack as an extra move. It's a very different squad to play and can be quite engaging for that reason as you start to think about the board in ways you never have before.

I would say their upgrades a little disappointing, though, although I certainly understand that Knight Smite would be tough to come up with decent upgrades for. Explosive pawns is detrimental more often than it's useful and Directional on the Cross Cannons didn't appeal because I'd lose a lot of control over my rook's positioning. Truthfully though, Push on the Spawn Pawn is all you really need to reliably beat the game on Hard with a squad this OP anyway, so more and better upgrades would probably only make them even crazier, which would run counter to your stated design goal. I would also say that you should remove the move upgrades, but that's certainly a case of being damned if you do and damned if you don't because whilst it multiplies the brokenness, not having it would lead to endless complaints, so I can't rightly say what the answer there might be.


It's definitely a toughie, but overall, accepting that the current form of this squad isn't supposed to be balanced, I've decided to give this squad a B+, which would be a C+ if I were taking balance into consideration. Compared to the Tectonic Titans, that's one mark off for the poor selection and wildly varying usefulness of upgrades and one mark off for all the jank and graphical issues, which I think strikes the best balance between wanting to take off more marks because those are actually very large issues and not wanting to take off any marks at all because most of it likely isn't your fault.
Top

Well I had fun with the Chess Squad... certainly does require a bit of thinking, especially when it comes to the Pawn Explosions.
https://youtu.be/wV8pcqPkCuE
Top

So I have also tried it out, and fiddled with the scripts some to try get it balanced, and here's my thoughts on what to change:


The King is... pretty fine, balance-wise. Except for the Push upgrade, that's too strong (it makes it like the king can do two attacks in one turn). Also, because it starts at 1 move, it benefits too much from a single move upgrade - I would instead change it's movement pattern to [move/2. If move is odd, can go one extra step in cardinal directions] (which should lower the power of an upgrade while still making an odd move upgrade useful) and set it's default move to 2.
The other thing it needs is the pawn's attack as a second weapon. For two reasons: firstly, to prevent it from being in extreme danger from leapers and scorpions, and secondly for odd moments like this.
Oh, and the way the pawns move is pretty unintuitive. I wouldn't necessarily say that they should be changed though.

The Knight is really fun to play... if you don't get the move upgrade. With the move upgrade, it can basically kill anything on the map. It's also too good against elites/bosses. So suggestion: remove move upgrades entirely (or, if you want them to still do something, make each extra move upgrade have it extend the L move by +1 both vertically and horizontally), and change it to 3 damage, +2 damage upgrade [2 or 3 power] (if it doesn't kill an enemy, it bounces back). ...And maybe have an optional push upgrade too. Maybe.
That being said, I was surprised at how not a problem the limited move options is. I was expecting it to be really hard to hit enemies, but with the pawns' help it was pretty easy.

And as for the Rook, contrary to the other two, it's far too weak. I don't understand why it has a quad-shot to begin with, considering it can't move diagonally. It basically means that it's restricted to staying on a singular line for most of a map and hope there's no obstacles in the way of a target. I would suggest changing it to a charge attack instead, like the Beetle's charge (which is also more thematic than a quad shot), and removing the flying (not strictly necessary, but it was just more fun when I was trying it out. Did I mention that I was trying out these changes that I just talked about?)

And finally, don't forget to add power costs to these weapons. Spawn Pawn and Knight Smite should be two-cost and Knight's attack should be one-cost (and pawn's stab should be 0. It might seem like a small thing, but it'll prevent shenanigans with weapon-swapping when using Custom Squad.
And death images/animations too. They're a little... non-existent right now.


In general though, it's really fun! It really does play very differently to the other teams, which is really what you want in a custom squad. Good idea and pretty good execution. Nicely done!
Top
Post Reply
4 posts • Page 1 of 1