Just a heads up- i finally updated my first FTL mod- my first working CODING and digital art- ever.
page right here: viewtopic.php?f=11&t=27787 The Bombast laser for my upcoming energy pack mod named "Rave on!".
each time it fires (maybe every 2nd time...) it gains 1 damage, starts at 1, ends with 3 damage. Slight chance of breach and fire.

Club beam (1 damage beam that hits only 1 room, pretty out dated)
Flail beam (1 system damage, 1 hull damage, high stun chance, CE had 3 ion beams, Bo, Baton, and Flail, due to ion not working well for beams it was removed, but later AE introduced stun, where these beams were recoloured to fit that, flail was left out and thus I went on to do it, Graphical art credits go to sleeper service)
Tanto Beam (simular to mini beam but pierces 1 shields)
Laito Beam (like a shorter range halberd beam but with less range and pierces 1 shield)
Tachi Beam (like glaive beam but shorter range and pierces 1 shield)
Katana Beam (4 damage 4 power long reload beam that pierces 1 shield )
Nodachi Beam (like above but longer reload time, much slower beam movement and much more rare.)
(above 5 beams are quite a bit more rare then norm)
Defense [basic] beam I (1 damage, longer beam length then normal, better fire rate)
Defence [basic] beam II (1 damage, longer beam length then above, slightly better fire rate)
Defence [basic] beam III (1 damage [i think], longer beam length then above, slightly better fire rate)
Barrage Laser mk I (3 shots, spreads)
Barrage laser mk II (5 shots, spreads more)
barrage laser mk III (7 shots, spreads even more)
Barrage laser mk IV (WIP, under consideration)
(might have light laser versions of the barrage)
Binary Laser Cannon [Blazer] (fires 2 heavy laser shots dealing 2 damage each but spreads over an area. [WIP]. debating if should be 1 damage + 1 system damage lasers instead, or maybe 1 damage but with x2 damage to hull... ???)
Bombast laser (mentioned above)
Chemical Lasers (older versions of lasers, got approximately 15% longer reload but also have a low-medium chance of starting fires, Not sure if will come in 'burst' forms or not.)
Auto Heavy Laser ( only can be found in engi sectors, it's simular to the CE auto laser but heavy. no mk 2 version due to being a prototype)

So far chemical lasers, heavy auto, blazer, and possibly the light laser version of the barrage will be added eventually. as you can see here it's quite a bit more then my go ballistic mod simply because I put both lasers and beams into the same mod. I already got plans for more ballistic weapons such as more light autocannons, maybe a heavy version as well, some more drones, machine gun arrays, mini gun, autocannon chaingun, etc. but for now I will not do much with go ballistic until I made this pack and another.
R4V3-0N, a dreamer.
Top 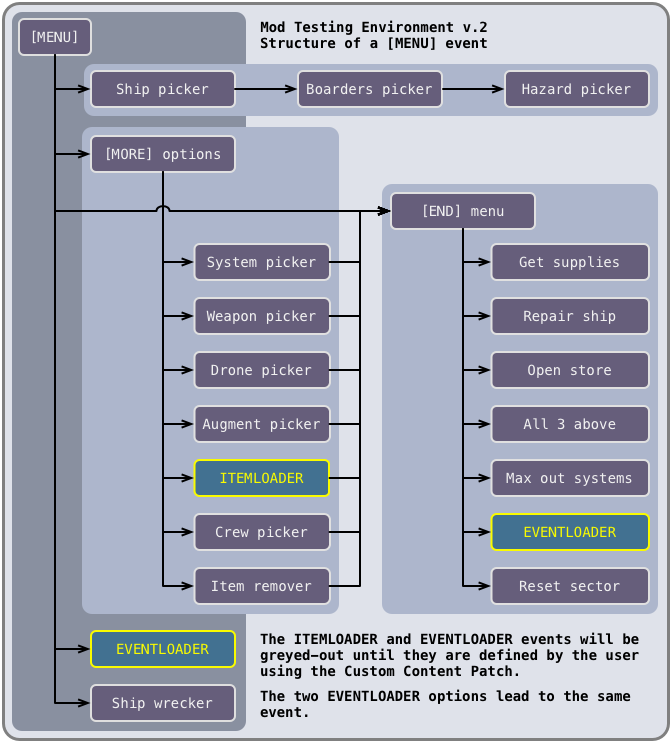 Have to ask, though; item remover? (I've been out of the scene for a while, think I missed something)

As far as I know, you can't remove items with an event, although there is a buggy way to make equipped weapons or drones disappear by forcing an event to install that system on the ship even though it already has that system. If that is what TaxiService is doing, I advise against it, even if it is just the MTE.

:0 oh no! Nothing of the sorts! It's an event that lets you subtract 9999 fuel/drones/missiles and/or 999999 scrap. It's really simple! The steal="true" attribute lets you click on the option even if you don't have as much as it asks, and it just steals whatever you have.

Removing fuel can be used to test for no fuel events. What about the others? I don't know! But i'll be darned if I didn't give the option to do it! Who knows what people might need to test?

no, seriously, i believe it might be of use somehow.
(MTE menus can now spawn alongside normal events in a game, more or less. Each start beacon asks you to spawn up to 10 menus as quests, and so you can, like, test events in a sector and use those menus as repair shops or some shit!)

Anyway, this is the code for the item remover (or however it's called):

It's almost ready for release too! Just gotta check a couple of things and add some texts here and there... I should be able to post it within 48 hours, tops. >_> There will be a new thread because the old one is kind of a mess. (i should probably tidy up that one too once i'm done with this...)

Chrono Vortex wrote:Well, I was going to work on a Scrin ship, but I recently started to listening to Amelia Earhart on the Thrilling Adventure Hour again and then I found this... I think you can guess what I'm going to do next. C&C was starting to get old anyways, and it'll be interesting coming up with an excuse to put a WWII plane in space. This is barely more than a concept as it stands, the to do list includes cleaning up the outline then adding colors and shading of course, making the 50 Cal and altering the starting and boss events to work with whatever Thrilling Adventure Hour story line there is.

The firing animation is only one frame because I want it to fire as quickly as possible. I need ideas for a name for the plane, anybody got any?

Redid the old plasma caster. Still working on the effects, but the base sprite is basically done.
Top

I've been neglecting it lately, but it's looking good so far. All it really needs now is the shading.

How soon? Could we get a rough estimate or is it too early to tell?

The next couple ships I am working on in gimp, sorry for large size and white space. Some Coloring, some Details, and mainly shading left to go.

First ship's based on a lego ship I made as a kid. Tried sketching a design beforehand for this one. It helped me immensely. Users browsing this forum: No registered users and 56 guests