@NarnKar: I've been very busy lately, but today i was finally able to take some time off and think about your ship!

The only major improvement i could think of was nudging the thrusters a bit away from the central axis of the ship. This is because, as it was, the exhaust would've hit the back of the ship! (assuming thrusters and back being at same height from ground)
Also, the way the thrusters were attached to the ship looked kinda flimsy, so I tried to encase them into those wing-ish things.
The last little thing that bothered me was that third metallic thing in the motor-ish part of the ship. >_> because, like, its width is not the same as the other two, but that's easy to fix!

I drew stuff over your hull too while i was at it. Some proportions are way off.
May this sketch give you some inspiration!! 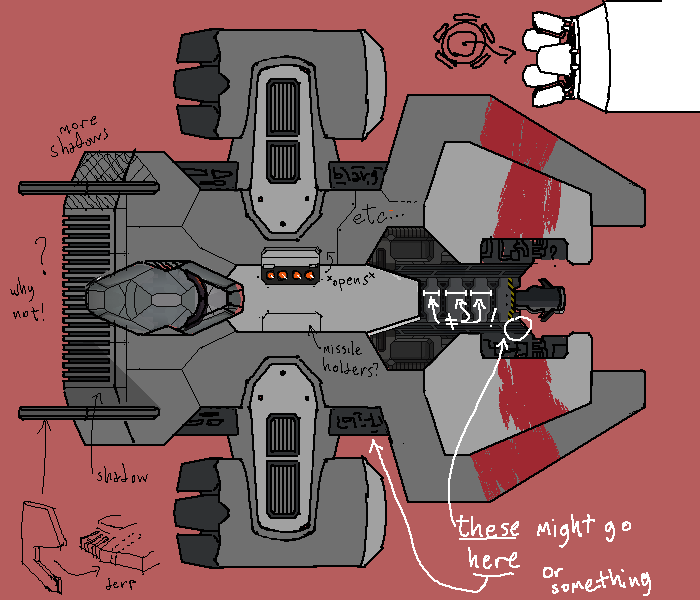 The dark grey areas should have more of those mechanic details you added in the front part.

Also, see that sort of white thruster at the top? As you know, i was working on a ship with similar thrusters, and i think that an odd-numbered flappy-thingy design would be the best for the weird perspective that FTL ships use, because the top and bottom flappy-thingies would overlap weirdly if they were even numbered.

...i hope that makes sense. I don't have enough time to draw or express myself more properly, but eh! Better than nothing! XD haha


PS: i can't comment on youtube because i've always refused to register a google+ account. >_> because paranoia and all. I would've replied to you otherwise :P

Thanks for the sketch, TaxiService! It's a really good "critique"/idea source for the artwork, it's full of good ideas and inspirations (like your thruster sketch on the side). And thanks for taking the time out of your day to work on it!
Mod Hub | Orion - A story of survivors
Top

It's been some time. However I have been working harder on the GO BALLISTIC! update. I hit some difficulties such as time restraints but I managed to get most of the animations done (at least the art...)


So far I have determined that the Gauss rifle will be the main base version of the weapon. Being a high velocity solid slug that pens some shields and leaves breaches.
The coil gun will require Advance Edition as it will be less accurate (at close range aka normal combat...) and this uses the SHOTGUN tag from AE for the Flak. It will however have a fire rate increase compared to the Gauss rifle.
The Rail gun will have a longer reload but penetrate more shields and may differ in damage slightly
Hyper-Assault Gauss rifle (HAG) will spray an area with individual small slugs. Kind of like a shot gun... a sniper shot gun! It will have the least penetration value and slightly less breach chance to balance the fact it has multiple shots thus multiple chances to breach. It will do more damage to the empty rooms for hull damage, but in system rooms it would do more system damage then hull. Will also be messy for personnel. This will have less marks nad require more energy per version and more rare then the conterpart. ie a gauss rifle mk I may be 2 energy, but the mk 1 HAG is 3 energy.

Anti-Ship Gauss / Coil/ Rail/ HAG's may be added later on as normal weapons and artillery. I will release a patch very soon for the addition of the standard Gauss rifle for GO BALLISTIC! soon and my next mod pack for weapons is already in the creations...

The blue options for these to open fire early on ships will arive much more later then the actual weapon. I play for blue options to allow you to open fire on an enemy ship before combat, possibly saving a civilian quite early... or scaring the enemy away... or possibly cripple the enemy some way before combat starts. Maybe some blue options for other things that isn't simply boasting it's range... but we'll see.
Last edited by R4V3-0N on Mon Jun 15, 2015 11:06 am, edited 1 time in total.
R4V3-0N, a dreamer.
Top

Wow R4V3-0N, those look incredible! can’t wait to see them in action.

@R4V3: I could rip the gauss cannon sound from a halo map and tweak it so that it can be used by FTL. (the sounds i have might be a little different than the ones in the video, but the quality is better.) (i would also fix the echoes and stuff to make it more suitable for FTL usage)

I don't know if that's the kind of sound you were going for, but if you're interested just let me know! It wouldn't require too much effort on my part.

TaxiService wrote:@R4V3: I could rip the gauss cannon sound from a halo map and tweak it so that it can be used by FTL. (the sounds i have might be a little different than the ones in the video, but the quality is better.) (i would also fix the echoes and stuff to make it more suitable for FTL usage)

I don't know if that's the kind of sound you were going for, but if you're interested just let me know! It wouldn't require too much effort on my part.

Well the sounds I was planning on having was more of the lines of the Mechwarrior Gauss rifles (MW/ BT has been the inspiration of a hand full of weapons I have made thus far)
https://www.youtube.com/watch?v=lh8togw6jQ8 Which can be found in this video as the 3rd weapon fired (Keep in mind MW4:Mercs is the 4th game of the franchise made in like 2004 using assets of the earlier MW4: Vengence game from 2001. So it isn't the best quality vid of example of the MW franchise. however this is what I grew up with)

HOWEVER the Halo one sounds quite cool as well and the thing is I have no software at all to make or edit sounds and thus I am in the dark on some weapons I want to make...

I will happily accept the sound affects you create for my set of weapons ^^;


I'm just woundering if there should be a difference in sound between each magnetic projectile weapon I'm planning above.

Coil gun and Gauss rifle is the same thing but using the same logic as "laser is not beam" for FTL I made them two separate weapons on a variant of the same thing
Rail gun being completely different but it's still the same field of weapon, being a long range Magnetic projectile weapon.
HAG is basicly a gauss shotgun.

The 3 could have slightly different sounds, or they may not... mk 1 to mk 3 may vary as well. But personally I will be happy with just 1 sound effect and rather surprised by the offer ^^ this will motivate me to get these weapons out sooner (as I was mainly gliding until I got the audio for rather the PPC's I'm working on, or the Gauss rifles)

I've tried using Windows Movie Maker to create custom sounds (I have a clip of Sharla from Xenoblade shouting "Fire!" over the sound of an artillery cannon firing) and then renaming the finished .mp3 into .ogg.

The problem is that while it plays fine on VLC, I can't seem to get it to work in the game. No sound plays.
But yeah, I think Movie Maker is an option if you lack software for creating custom sounds.
Top

UPDATED above post to show Coilgun mk II and III.

@RAD: here, this zip contains the converted sounds! I found 4 slightly different permutations in the halo map i had. I shortened their echo significantly, converted and packed 'em! ; )
I also included the gauss sound from that video you linked. I tried to isolate it from the background music, but i am not sure the result is very accurate. : \ If you happen to find a source with less noise from which i can extract that sound effect, i could get you even a better one!

PS: nice sprites!!! I love all the little coils lighting up like that! I wonder if they might be too dark though? I mean, are they recognisable on a space background? :o


@styles: I think just renaming the extension to .ogg won't make it! I bet VLC was able to read it because it recognised the file as the mp3 it really was. :P
But hey! VLC should also have an export function! (maybe called "stream..." or something?) Try looking into it, it should be able to convert files between formats.
also i second the love for audacity.
Last edited by TaxiService on Tue Jun 16, 2015 9:26 am, edited 1 time in total.