When I try to locate the ftl.dat file via the tool browser, it doesn't appear in the FTL folder. When navigating to it via explorer though it is there.
I'm using 1.9.1, FTL steam version on windows 10, Steam and thus FTL are not in C: folder, also tried admin version.
Top

I'm having some severe trouble uninstalling mods. I followed the directions perfectly but the game will not return to an unmodded state. I untoggled the mod Infinite Space and then restrted the manager as well as the game and it didn't work. the game is still in infinite space. Im on windows 10, is that a problem for Slipstream
Top


Just discovered this fantastic mod manager for FTL. Imho it just lacks a small feature : remembering which mods are installed when you launch it. Except for that, it's perfect : clear, simple and efficient...
Top

Question, could anyone tell me what I'm doing wrong? I think I've followed the instructions to the letter. I get this patched up without problem, but it takes no effect in game. All I'm doing is just adding one weapon ("SHOTGUN") for testing:

Your .ftl folder should just be a renamed .zip folder.

Additionally, since it's a mod,

It is, it was. I zip it then rename the .zip to .ftl (otherwise Slipsteam won't detect it). But once patched, it's still not showing any changes in game. I did check those text entries you pointed out, makes no difference.

It's probable I'm missing something more stupid than that!

So if anyone feels so inclined to explain it like I'm a complete idiot, that would be appreciated. All I'm trying to do is add some random weapon to some random ship (once I can reliably get that down I can make sense of the rest).
Top

Tentacular wrote:Question, could anyone tell me what I'm doing wrong? I think I've followed the instructions to the letter. I get this patched up without problem, but it takes no effect in game. All I'm doing is just adding one weapon ("SHOTGUN") for testing:

this looks good? file extensions are visible so no problems there

this looks good too? slipstream is making no complaints about innerPath which means the file structure is good, so no problems here either?

then there's the code, which looks good too? there's a problem with the id attributes, but that has no effect on the mod working. to be honest, I don't know why the mod isn't working, looks good on my end the way you've described -- the mod adds the Flak I to the Rock A. just to reiterate the structure of the mod as I understand it:

made text file, renamed to blueprints.xml.append. in the file put the code you've put here (is basically the Rock A shipBlueprint, added SHOTGUN to weaponList, correctly adjusted count). put this file blueprints.xml.append into a folder called data. put this folder into a .zip (send to compressed zipped folder or added to .zip archive or etc.) and renamed the subsequent file to .ftl, placed in mods folder, then patched.

well I did exactly that and the Rock A has another weapon, the Flak I, as intended.

the problem with the id attributes (again, has no impact on intended effect of mod) is not that you shouldn't include them, but rather two-fold:
1. text_PLAYER_SHIP_ROCK_title is not defined in vanilla text_blueprints.xml, should be ship_PLAYER_SHIP_ROCK_title, same for other ones
2. you've specified both id attribute and value, which is redundant because the text referenced by the id attribute overwrites the value. should only specify one or the other, if you don't plan on changing it then should stick with the id form because it has localization stuff done for ya. but I'll cut you some slack here because I remember superluminal does something like this in the latest version for the sake of backwards compatibility.

um, so in case none of this has made any difference, you can download a version of your mod that I made here: https://www.dropbox.com/s/zczhgi8echnht ... g.ftl?dl=0 (you don't need a dropbox account). see if that works, compare with your own, etc.

so hopefully by this point, the problem is solved. this next bit isn't required, but I think it can make things easier (and open more possibilities) going forward.

here's where these helpful things called slipstream tags come in (you can read more about these in readme_modders.txt under Advanced XML, and see some examples here: viewtopic.php?t=26426). slipstream tags let us make only the changes we want to make. we want to just add the Flak 1 to the ship in the Rock A slot, not add the Rock A ship then add the Flak 1 to it, see the difference?

here's the link for this mod (code below): https://www.dropbox.com/s/0or8ez4xbhxcl ... s.ftl?dl=0 On vanilla, it has exactly the same behavior as the mod above, but this mod will work for any custom ship on Rock A slot.

hopefully I solved your problem? any questions, feel free to ask away

mr_easy_money wrote:um, so in case none of this has made any difference, you can download a version of your mod that I made here: https://www.dropbox.com/s/zczhgi8echnht ... g.ftl?dl=0 (you don't need a dropbox account). see if that works, compare with your own, etc.

here's where these helpful things called slipstream tags come in...
...translated to plain English: find the shipBlueprint named PLAYER_SHIP_ROCK -> find the weaponList inside -> set count to 4 and add weapon SHOTGUN to the weaponList.

Hey, thanks a ton!

Your mod works fine, of course! I think I found the problem when validating (although not completely understand it as both your and my mod structure look exactly the same to me, so an explanation would be welcome): 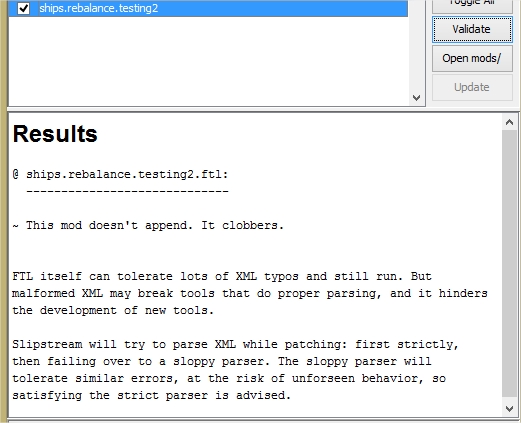 All I'm doing is: rename (.ftl to .zip) > unzip > edit .xml > zip back > rename (back to .ftl). And mod.name/data is also undercased. Genuinely puzzled

PS: Thanks for the slipstream tagging advice, that's certainly the way to go!
Top