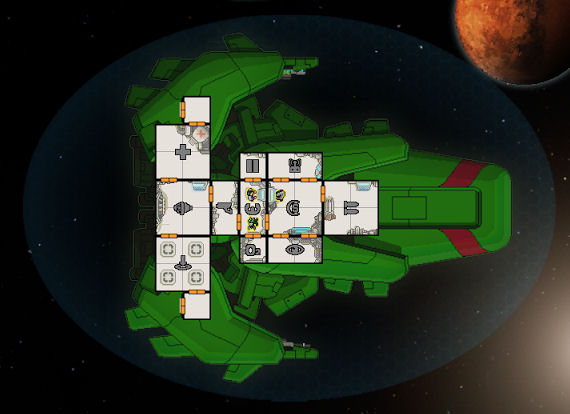 "What do you mean, "We gotta go right now!"?", screamed the first mate through the intercom. "I haven't installed the power couplers for the teleporter and cloak yet. We go now and we'll have power for the ion blaster and laser but that's it - no cloak, no 'porter!"
"Who cares?! - We have to go now!", was the captain's reply. A shudder through the hull and a warning klaxon punctuated his response.
The third crew member, a mantis lept for the weapons room, ready to defend his old ship and new allies from the rebels who had found them.

Laser beams flashed across the cockpit window of the refitted mantis bomber as it slowly at first lifted vertically from the ground. At 10 metres up, she turned a hundred and eighty degrees presenting her stern to the attacking rebel ground troops. The first mate, an engi, pushed the engine power control bar full forward. Blistering heat from the ship's engine exhausts roasted the rebels, each instantly turned to flaming gobs of flesh and fabric. The forest clearing the ship alighted from soon disappeared from view as the spacecraft streaked skyward for the stratosphere and off-planet.

The mantis, disappointed for not getting to shoot somebody got up from his station, heading aft to speak to the captain. "When I defected to you guys, I thought we'd be fighting, not running.", he said.
The captain understood how amazingly tricky it would have had to be for the mantis to steal the ship in order to join the Fed's. A captain himself, the huge insect had had to rig the ships oxygen system to vent anaesthetic gas through the craft while he wore a respirator. Once his crew were unconscious he'd left them at one of the many ubiquitous store beacons then headed for federation space and hailed a fed cruiser with his intentions to defect.

It was only the possibility of seeing mantis tech first-hand for the first time that saved the mantis from a blazing laser reply. The Federation Military Branch loved the craft. Teleporter science was still in its infancy for the humans and here was a reliable, fully operational one. The knowledge gained from that alone was priceless.

Naturally though, once the ship had been fully examined, the notion was to scrap it. Its previous owner, the defecting mantis protested vehemently. Grateful for his donation, the brass elected to let him keep the ship, assigning him a captain and an Engi to keep the ship in modest repair. The craft was repainted from the original mantis red into a military green and the now three-man/being crew named her The Praying Mantis. Their missions were always simple milk runs; delivering dignitaries, transporting military supplies etc. and it was largely up to the crew to keep the Mantis fuelled and armed and running.

One such mission led them to a mining community, delivering vaccines. Their contact met them with an amazing revelation. He was a Fed Intel Handler and the spy he was assigned to had uncovered rebel plans for a huge flagship - a craft so powerful it could turn the tide of the Fed-rebel conflict. Almost the instant he handed the plans over to the human Captain, rebel operatives turned up. It was a real shame as the engi first mate had only just started installing the new power supplies he'd scrounged and now it seemed they were going to be wasted. The energy crystals, once exposed to air had to be resealed during the installation process or they'd die. That was inevitable now. And that door between the sensor room and engine bay was still sticky too…
_______________________________________________________

This is The Praying Mantis. It's a modified Mantis bomber. The crew are a human, an engi and the mantis who brought the ship to the fed's. They've made several modifications to the ship since it was in mantis hands/claws including:

They kept the mantis pheromone augmentation which allows the crew to move more quickly. Plus it means less cash spent on coffee.

Weapons are an ion blaster and a Mark 1 burst laser. There are slots for 4 weapons.

Unzip the file which includes the ship, some screenshots and this story and play guide.
Use Grognac's Mod manager after putting The Praying Mantis.ftl into the "Mods" directory referred to by the mod manager.
Top

Nice to see a ship with a bit of story behind it ;)

A few issues you may want to fix:
- cloak graphic is incorrect size; it should be ship hull + 10px blank space in all directions. Your hull graphic is 548x500 therefore cloak should be 568x520
- if you are including custom room graphics, give them different names to stock ones or you'll overwrite it for all ships that use that stock graphic
- shield size is 1px incorrect becauuse you have an odd number for your shield dimensions, meaning it doesn't cleanly divide by 2. use even numbers
- any system that is on the ship automatically starts with 1 power, you can't start it at 0
- 1x1 rooms are not properly supported by the game and will give incorrect no-oxygen graphics. the only supported sizes are 1x2, 2x1, 2x2
- weaponlist count should be 2, not 4, since you aren't starting with 4 weapons. weaponslots should remain 4

i probably missed some other things because i haven't tried it ingame, this is just from looking at the .ftl file.
a decent first attempt but could do with some polish ;)
All ships I have created include custom weapons, graphics etc:

Hey, DryEagle - thanks for the input! Your ships are awesome and I consider your feedback very carefully.
I'll address the points you mentioned and re-release The Mantis.
The 1 space rooms do work though - O2 levels change as they should.
The shields work to protect her in-game, as does the cloak. I'll address the sizes anyway though - I like things to be absolutely perfect too.
The custom room graphics - I made sure to use new names for them too so as not to overwrite the default game ones. I added a new number after the "underscore bit" so there will be no conflicts there.

I've taken this baby to the end of the game and had no glitches at all except the sticky door between sensors and engine room which I mentioned in the story. The door works for guys to pass through no worries but you can't individually open and close that door all by itself. Other than that, she works a treat.

Why not take her out for a spin yourself while I'm looking at the corrections you suggested?

Regarding the small rooms and oxygen -- what DryEagle meant is that the red stripes won't show up properly, though oxygen levels will be falling correctly. In that sense, a ship can have any size rooms, thoigh they'll look kind of ugly.
While I never gave much thought to shield graphic's dimensions, it makes sense given how ellipse property in shipname.txt works (doubles the width and height values to get the actual shield perimeter)
Superluminal2 - a ship editor for FTL
Top

OK, fellas - the thing is, the-one-space rooms' falling oxygen levels do work. Open one of the most external doors to space and the room instantly goes dark pink. Then open some of the other rooms including the one-space door control and oxygen control and they gradually become more and more dark pink like they're meant to.

This whole ship works. I know the fine print isn't absolutely perfect in the blueprint file but the thing works.

Have either of you taken it for a drive to check?
Top

I think they mean that the red stripes show up incorrectly, but the room color is fine. It looks amazing, so I'll give it a try.
Top

Per request of the author, this thread has been moved from the Working Mods subforum to the Mod Development subforum.
Forum janitor — If you spot spam, PM me the URL and/or the username of the spammer.
I have powers, moderator powers. I am not keen on using them, but will do so if needed.
Top

Thanks for the tips, fellas - I'm currently making a few changes to The Praying Mantis and will upload to this section of the forum as soon as they're done.
Top

Can't wait for that to happen.
A better decision is based on knowledge and not on numbers.
Plato's hunting knives
Top

I didn't know the mantis were religious! (I assume you meant preying mantis for the title.)
Top
Post Reply
12 posts