I present to you...
The Bounty Hunters mod!
(Well technically the Bounty Hunter mod because I have only added one ship/character at the moment. More will come though!)

https://drive.google.com/open?id=1VtnVz7untZG4CdO4GUHNGC-q9CFtZSBH ngl I forgot to put the link, but it's here now!

What is the Bounty Hunters mod?
The Bounty Hunters mod is a ship mod that adds a unique story/back-story for each ship and its captain. When you start off the game, you will be given a (Blue) option to play an opening story. This will be unique for each ship, but at the moment there is only one new ship. This also means that for now you can play as captain Verity Quinn on any ship you like.

What do these opening stories do?
The opening stories provide insight into who your character is, and how/why they got dragged into the Federation Civil War. You will get your captain as a crew member, progress through a short story, and then stock up on supplies for your journey. The first sector is also much kinder in this mod, so make sure to spend as much time in it as possible.

The Venatrix Replaces Stealth A 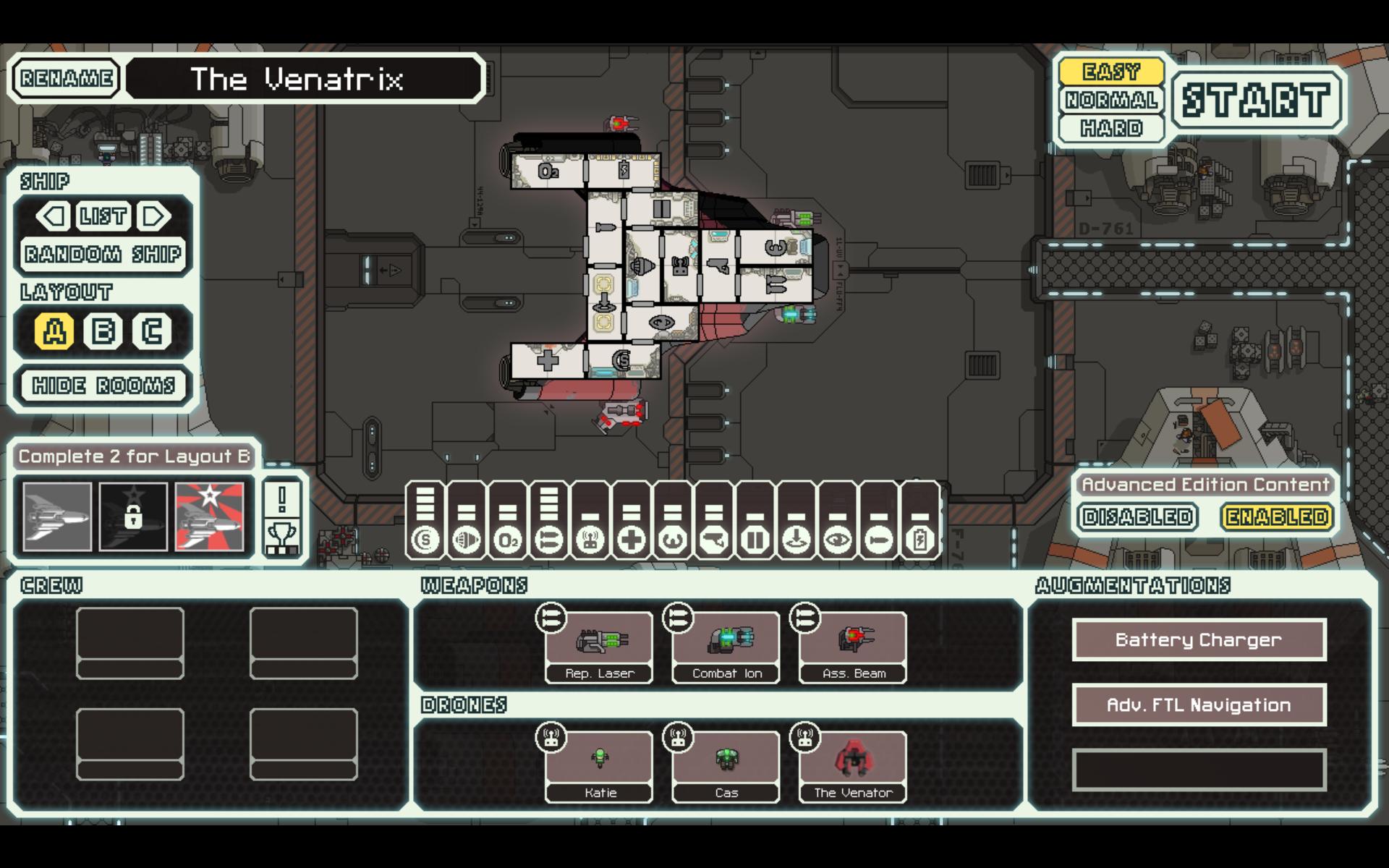 Once a standard Federation scout, captain and bounty hunter Verity Quinn has turned it into a powerful ship.

Equipment:
Gatling Laser - Slower version of the Chain Laser, but it is quite powerful when combined with the other two weapons. (It has a slightly higher fire chance but who cares?)
Combat Ion - Ion Blast mk 1 that charges 1 second faster.
Assault Beam - The military equivalent of the mini beam. Charges faster and is a tiny bit longer.

Flak Artillery - Basically just the Fed C Artillery but it has an image.

The Venatrix is the ship of famous bounty hunter Verity Quinn. It is decked out with systems, weapons, and drones from previous jobs, but doesn't have the reactor power to use it all. In the early game, you will probably have to rely on the ship's backup battery, or simply forget about some systems.

Future Features
This is only the first version of the mod. I plan to add at least two more ships and stories to the game, and to add a unique (Blue) option for each ship at the last stand, to expand on the story-telling aspect of the mod. If this mod takes off I will also work on compatibility with other mods.
I also want to make sure this mod is balanced. I repeat, share your suggestions on balance! While a ship that makes the game easier, without breaking it, is fun to play, that's not what I'm aiming for here. Also share other suggestions because I want to make this as enjoyable as possible.

Could I do a let's play/video/stream with your mod?
Of course you can! I would appreciate it, though, if you read through the story, rather than skipping through it. DM me the link and I'll check it out!

Credits
Hulls, gibs, and drone images from Captain's Edition. I'm not sure who created these images but if you're not okay with me using them, DM and I will replace with my own images.

Re: [Ship] The Bounty Hunter Mod