WARNING: THIS SHIP CANNOT GET SHIELDS FROM SHOPS: BUYING IT IS A WASTE OF SCRAP!
THIS SHIP ALSO DOES NOT WORK WITH OVERCHARGED SHIELDS, SUCH AS ZOLTAN OR SHIELD DRONE

Deep inside the nebula, there floated a ship. It had seen everything from its eternal rest: Pirate Salvagers, Rebel AI Scouts, Blackmarket Trades, and even a few hibernating Lanius that missed the ship. Although the ship was no more, with no AI system in it, it somehow survived its float: It was in a stable orbit around a planet with few asteroids, and the ion storms only occasionally hit it hard enough to cause serious damage. One orbit, however, a Federation Ship arrived and did a quick scan.

"Hey uh, Captain? We have a derelict ship here."
"Another one? This nebula is full of them... What model is it?"
"Its... Its an old Kestrel Model, sir!"
"What are those doing all the way out here? Let alone still intact enough to be recognizable? Go ahead and grab it, we could research it to see the past crew and update our history catalogs."

The Rebellion rose. The sparks of destruction were getting shed on the sector, and the military was being forced to draw back to guard the more capital sectors. A few scientists stayed behind to watch things unfold, assuming they'd be safe due to their lack of military profession and loyalty to advancing research for all. The Scientists saw awful things with their scanners: Rockmen being used for labor until they died, Zoltan being strapped to engines to make them stronger, and worse of all: The construction of a Flagship, made with stolen technology. The Scientists took a detailed scan, and outfitted the only ship that could fight still in the ship yard: The old kestrel. The Kestrel was outfitted with heavy weaponry, but was deemed unable to contain shields. The scientists knew no human could survive battles when they were getting shot, due to the lack of shields, and so put on an AI modeled after the Flagship AI. Finally, the ship was as ready as can be, and just as the last of the Federation Military left the sector and the Rebel Fleet was about to swallow the sector whole, they enabled the AI, naming it Reliable.

And so, Reliable jumped away, carrying the vital information. 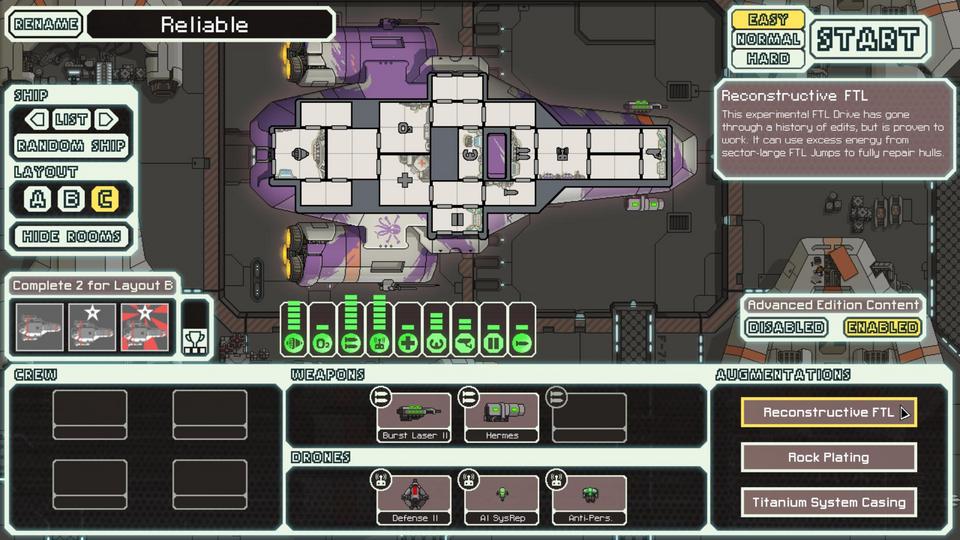 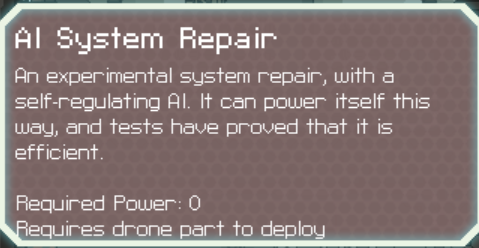 The Reliable is an AI Ship that contains powerful weaponry, powerful starting armor, good repair system including full hull repairs, and... Wait, no shields? Not even purchasable!?

The Reliable has no shields, whatsoever, and cannot get any. To help soothe troubles, the Reliable has a Defense Drone MK II, two sets of armor, and a repair drone that doesn't need power. While the Reliable has no crew, it has the defense of not requiring oxygen: Boarders often asphyxiate, while Lanius/Ghosts are dealt with using the Anti-Personal Drone. The ship DOES have a weakness: Beam Weaponry scare it, and it will often take massive damage from beam weaponry: Its excellent engine and defense drone cannot stop beams, and its armor is meant to be a last resort. Along with that, the Reliable has 40 hull.

For boarding defense, the Reliable can disable oxygen with few repercussions and use its anti-personal drone.

The Reliable has an Artillery System that shoots five lasers. Nothing special about them, just five weak lasers. It also comes with a Burst Laser MK 2 and Hermes Missile to deal with enemies quickly.

For weapon defense, the Reliable's very first line of defense is the Defense Drone MK II. It can shoot down attacks. After that, the high Evasion can deal with many lasers and missiles that make it through. Finally, its armor has a chance to just straight up ignore damage. Finally, it has 40 hull.

Due to its shieldless nature, its weapon and drone systems have a buffer so that it is harder to disable them.

The Reliable DOES have an oxygen and medbay system, so it can carry crew if gotten.

The Reliable prefers a more risky playstyle, being able to take massive amounts of damage and repair quickly: It can get lots of spare scrap by the end of the game, and has excellent weapons.

AI SHIP CORE (v.1.13)
http://www.mediafire.com/file/17vp8m8l9prvoat/AI+Ship+Core+V1.13.ftl
This mod is required for several features of the Elwinoid to work, such as its Reconstructive FTL Drive.

RELIABLE
http://www.mediafire.com/file/ylzn5vx465btg0p/AI+Ship+Reliable.ftl
This is the Reliable ship.

ANTI-CRASH HELP
https://subsetgames.com/forum/viewtopic.php?f=11&t=29082
Not made by me and not required, but can be quite helpful.

Thank you to the kind modders at the FTL Discord who helped me make this ship. I am going to take these lessons and run with them to create, hopefully, AI Ship Versions for every ship in the game.

WARNING: THIS SHIP CANNOT GET SHIELDS FROM SHOPS: BUYING IT IS A WASTE OF SCRAP!
THIS SHIP ALSO DOES NOT WORK WITH OVERCHARGED SHIELDS, SUCH AS ZOLTAN OR SHIELD DRONE
Top
Post Reply
1 post • Page 1 of 1