Hello again all! For my 1.5th mod post, I thought I'd make it a big one. So I give to you the Scrapyard Ship Selection! Which will you choose to show the Rebels that the Federation isn't done yet?!

NOTE: All three ships replace the Engi type A ship so only install one at once!

Choosing your ship
You are a captain of the Federation fleet. You've been posted at this Federation station since the war with the Rebels began and have seen some amount of combat, so when you get the message that the Rebel fleet is approaching your ship is in no shape to fly. Despite this, as the highest ranking officer you are given scans of the incoming fleet containing details of a flagship that has the potential to throw the Rebels into disarray if destroyed. Knowing that there is no chance of getting her space-worthy in time you have to resort to other options.

As a major station near major combat areas, a large amount of ship scrapyards have been set up here to take advantage of the plentiful business. However, as the threat of Rebel invasion grew many of the workers of these scrapyards used whatever they had around to make vessels to flee. You know of three such ships that have been impounded due to issues with general and weapon safety checks. Not being heartless, you decide to release 2 of them from holding but ask the crew of the remaining one to assist you with your mission, and they are happy to help if it allows them to get of this station:

THE AGGREGATE
A ship created by the workers of Geode Co. Disassemblers, a Rock owned scarpyard, in order to outrun the rebel fleet. 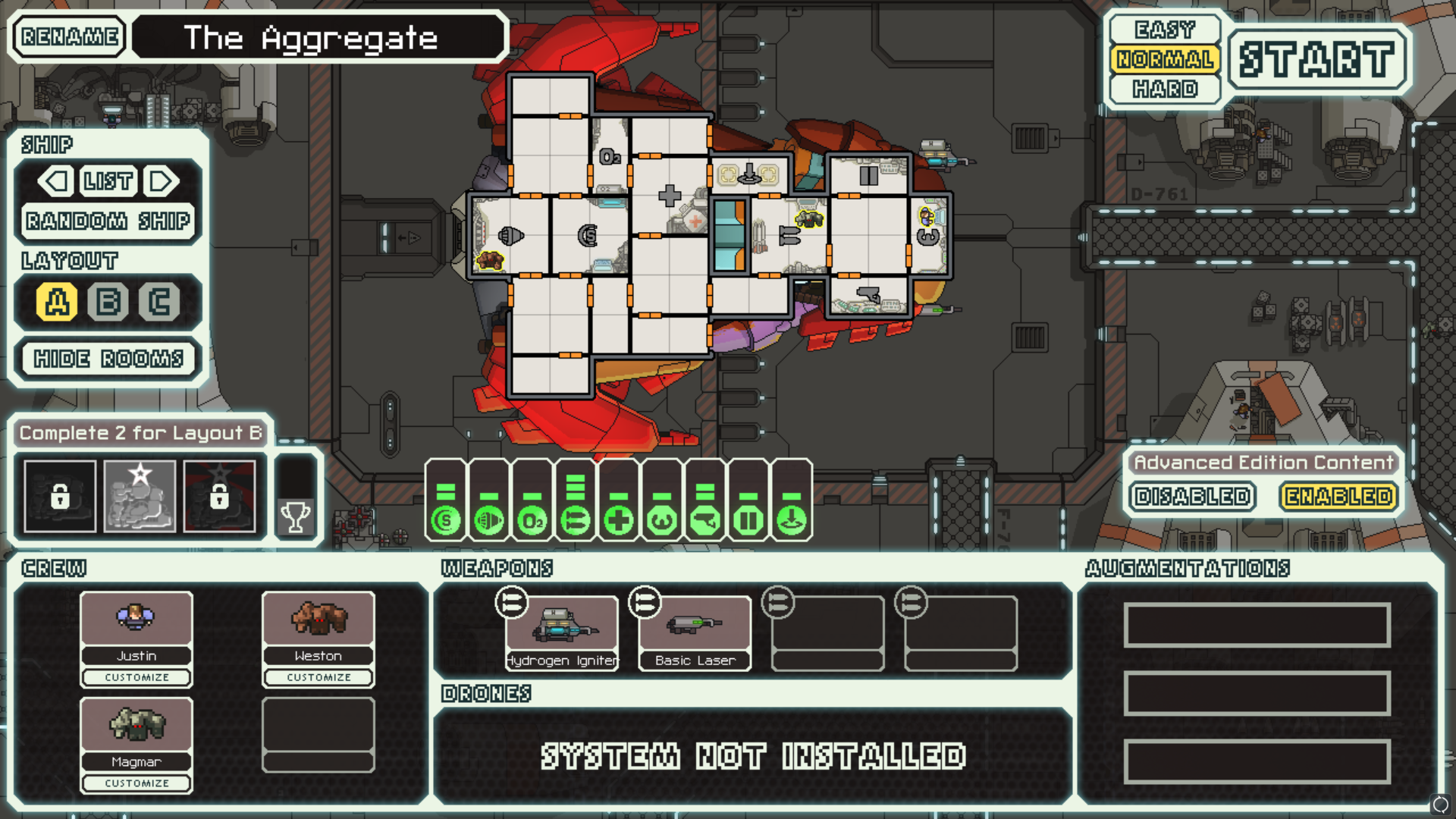 When trying to arm a ship from a scrapyard, your options are limited somewhat as to whatever is semi-functional that the original scrapper missed. In this case, the workers of Geode Co. had limited options in terms of weaponry, instead having a wealth of heavily damaged ship systems. After some trial and error, a terrifying custom weapon made from a shield and life support system was developed; pressurised hydrogen is injected into a tiny shield bubble to be fired at the enemy, setting crew and ship aflame.


THE AMALGAM
A ship created by the workers of Joe Slimm's Hulk Storeyard, a Human owned scrapyard, in order to outrun the rebel fleet. 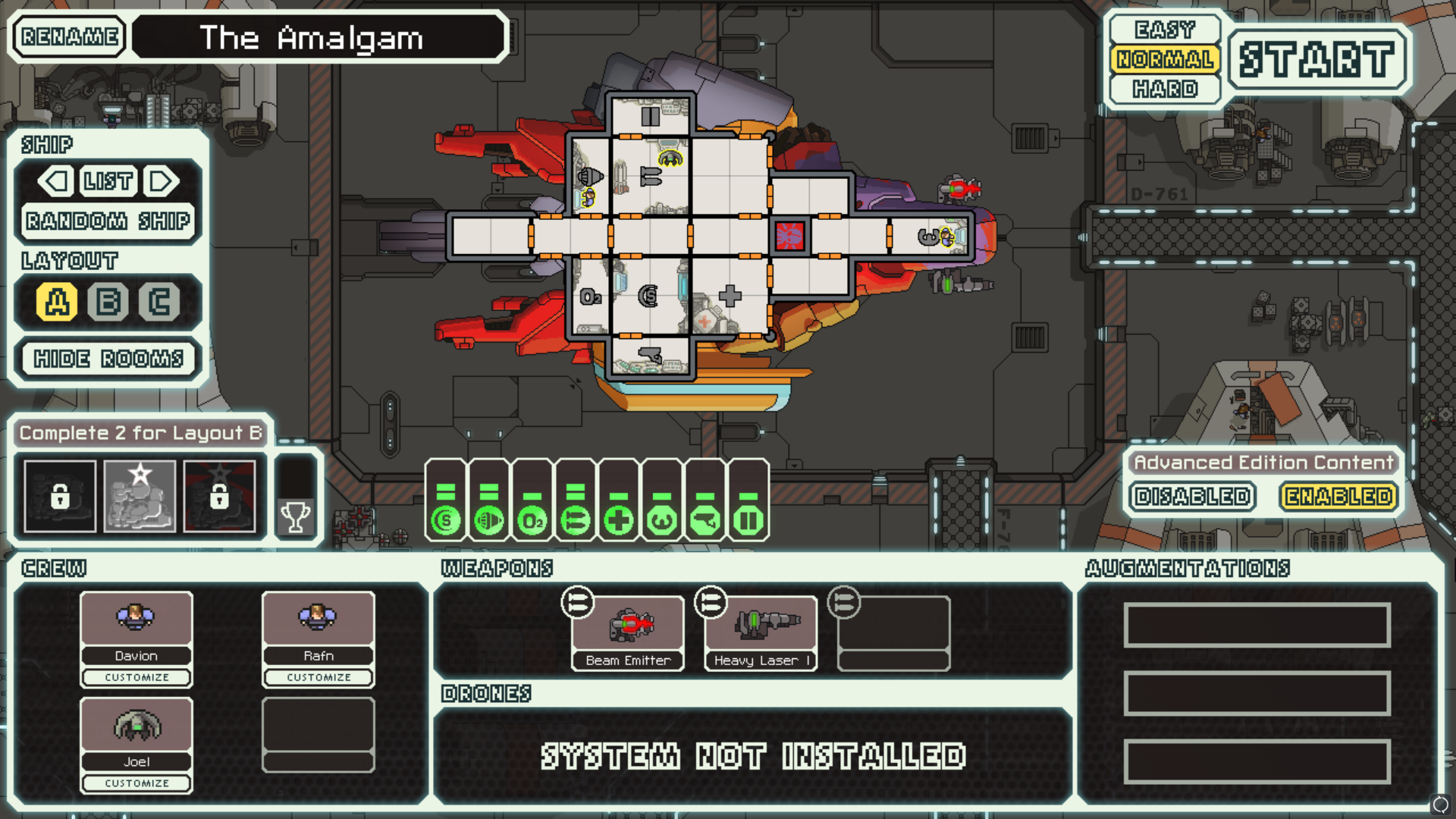 When trying to arm a ship from a scrapyard, your options are somewhat limited to whatever is semi-functional that the original scrapper missed. In this case, the workers of Joe Slimm's Hulk Storeyard had to create a weapon from individual components from weapons reduced to 90% melded junk. The end result is a beam emitter that due to the level of power that is run through it holds a very limited capacity but fills very quickly.


THE CHIMERA
The Chimera is a ship made by the workers at Xantar's Scrap-Porium, a Slug owned scrapyard, in order to outrun the rebel fleet. 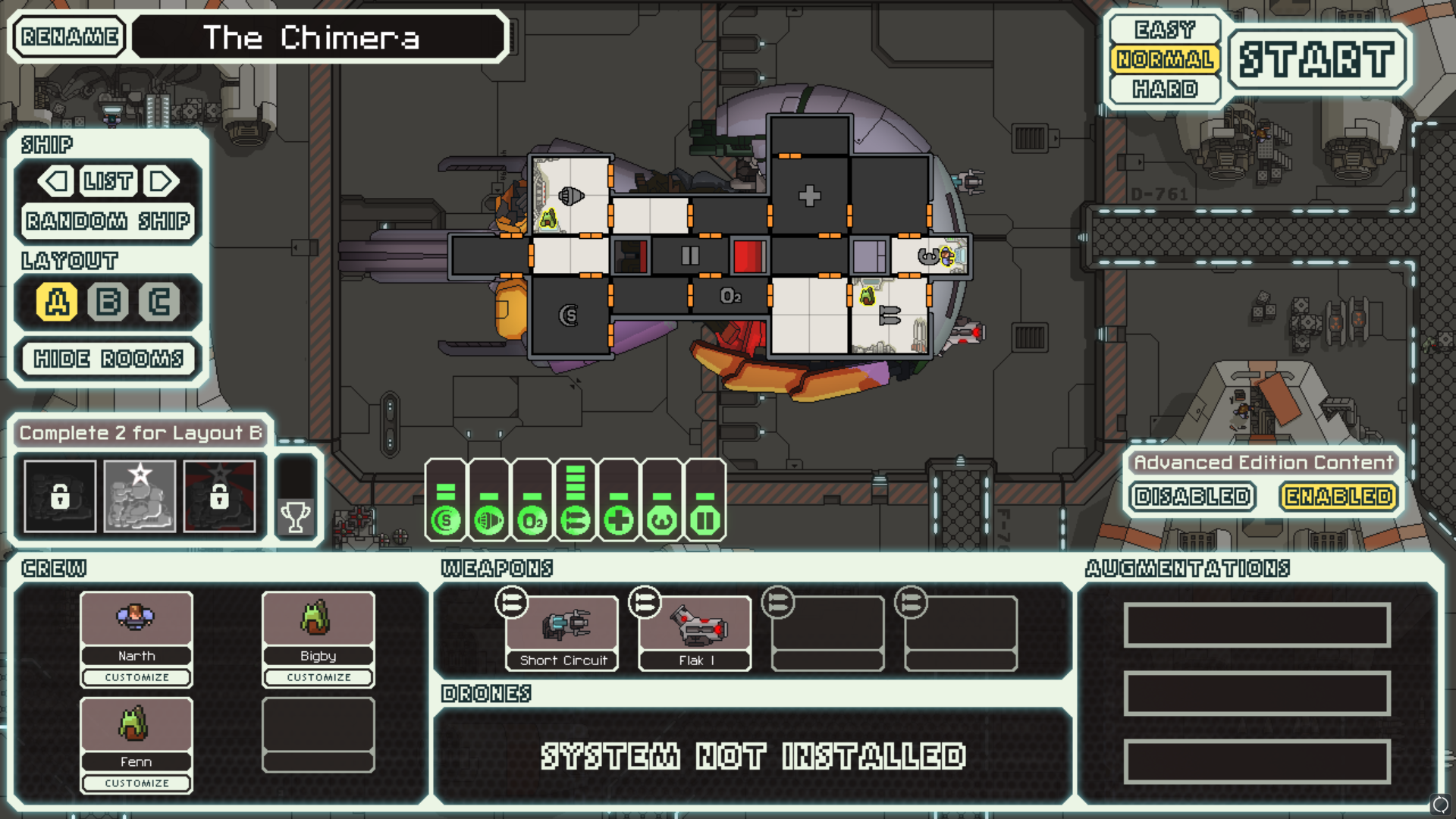 When trying to arm a ship from a scrapyard, your options are limited somewhat as to whatever is semi-functional that the original scrapper missed. In this case an ion weapon that most of the internal components had been fried to all hell. While it was repaired as much as it could be, it no longer can hold a high enough voltage to produce an ionizing effect but still packs a strong enough kick to give a potent shock to both crew and systems.


Thanks all for looking at my mods! Let me know of any fixes or balance issues you may have with them and I'll endeavour to fix them ASAP

Woah.
Is that weapon art yours, because that is spectacular.
The same with the ship art, it’s also excellent.

Jumbocarrot0 wrote:Woah.
Is that weapon art yours, because that is spectacular.
The same with the ship art, it’s also excellent.

Yep, all my own work. It *is* made from a combination of my own work and weapons in the base game. Thanks