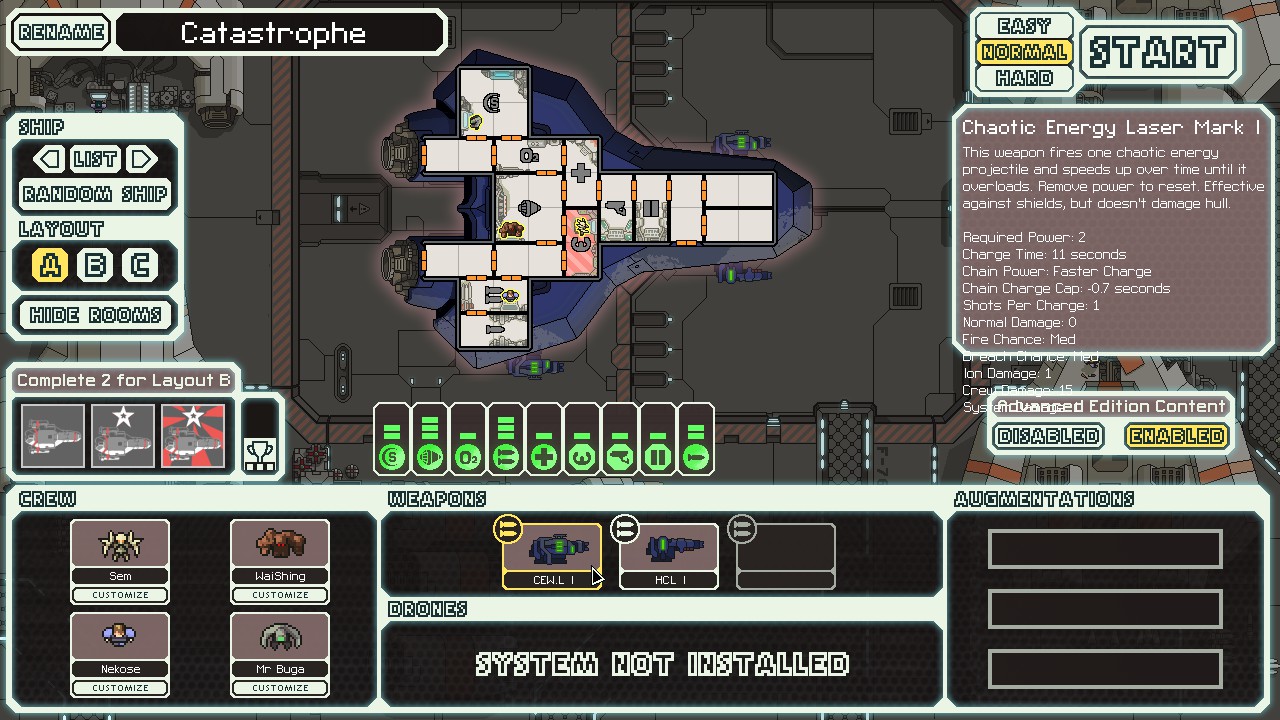 AE.1.1 Update:
-Replaced starting weapons with custom weapons
>Ion Blast -> Chaotic Energy Laser
>Heavy Laser -> Heavy Chain Laser
-Increased starting systems and reactor
>Engines increased from 2 to 3, because the ship is classified as a Runner
>Weapons increased from 2 to 3, because replacement weapons needed it
>Artillery increased from 1 to 2, because it was too slow for early game usage
-Visual updates
>Gibs have better direction so they don't cross other gibs
>Cloak image is whiter
>Shield image is ... more chaotic?
>Custom weapons match hull color instead of default RAD Weapon Pack colors

Credits:
FTL, Slipstream, Notepad, PSP7
SentryJumper for Hull Art
Arfy for Weapon Art
Biohazard063 for testing, because I don't want to get Java to run Slipstream myself. This is why I don't have my usual hanger image for this ship.
Edit (Oct. 11, 2017): Running Java/Slipstream now, so there is now a hanger image.
Last edited by RAD-82 on Tue Aug 18, 2020 6:56 am, edited 4 times in total.

hey! nice to see that you're using my weapon art!
Discord: ATLAS#9226
Top

Ship has been updated.

Artillery is too slow early game, making the gameplay feel too much like vanilla FTL, so I buffed the ship and gave it custom weapons. You now have your very own single-shot choatic energy laser so you don't have to wait for the artillery to experience it.

I made some other visual changes, such as altering the shield image and coloring the starting weapons to match the ship. The Heavy Chain Laser was originally a blackish color to match my Bahamut ship, but I felt it looked bad.