Are you sick and tired of the same old, boring FTL sounds?
Of course you are not! Why would you be? It's helpful, informative and will not steer you wrong.

But maybe it could help you out just a little bit more. Introducing: Now you'll not be unclear as to what happens when you fire a weapon. It's distinct audio cues will let you know exactly what's coming your way. Make no mistake when the enemy fires a beam you know it's a beam and not a solar flare or when you are in combat, you know if the Hacking Drone has hit your systems before it fires.

What? The game does that already? Well, if you don't trust me, trust in these testimonials I totally did not make up:

This is better than the Extreme Ships Pack. Although it probably... (cut for brevity) - Tabitha MIa

So yeah, totally real testimonials from people who have totally downloaded this mod. Very real. Very official.
So what are you waiting for? Try it today and let me know what you think! 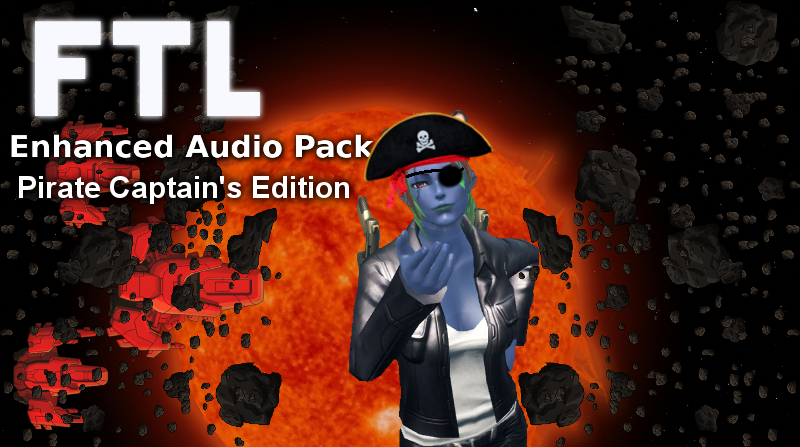 As it was suggested, I've changed a few of the sounds around and well... that's about it.
Top

I've changed a few of the sounds and also enhanced the audio.xml file itself so some sounds will be louder and easier to hear.
http://www.mediafire.com/file/sihowe0a5 ... o_V2.2.ftl
Top

So I was planning on making more sounds available but I've decided to do a few quick fixes instead for the moment.

Version 1.2:
- Sea shanty for system repairs is quieter as I figured out what "Count" meant. Although it's probably a bit too quiet now. It's also more synced up.
- The FTL jump is much shorter as it can get rather annoying if you're jumping from empty beacon to empty beacon.

I'm interested in this, but I'm not going to download anything without a preview of what I'm getting...

Atruejedi wrote:I'm interested in this, but I'm not going to download anything without a preview of what I'm getting...

Let's just say the sound effects of the game are replaced by 'self' made replicas.