Before the rebellion, the Federation found plans for a massive space station floating amidst the debris of some battleground. Their scientists determined that the blueprints came from a long time ago, in a galaxy far, far away. When war broke out, it was rushed to completion with a non-existent shield and a hastily slapped together engine mod to allow movement. Relying on its super shield and superior arsenal, the death star is a force to be reckoned with. But can it defeat the rebels' own pride and joy?

I have noticed a distinct lack of Death Stars on this here forum, so I decided to make one. 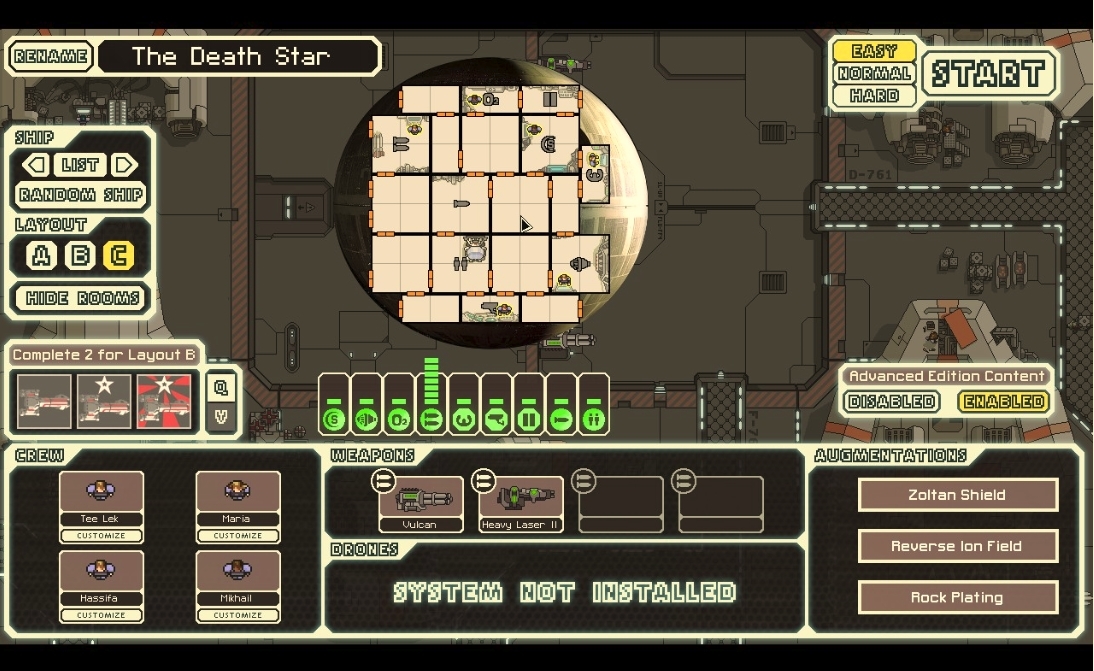 To recreate the Death Star feel, I have made the ship fully staffed, but by humans, as well as given them a clone bay. You know, so it's all staffed by clones. The zoltan shield and rock plating give it the impenetrable feel that it always has, and the reverse ion field because... well, to be honest, I like it.

Not only that, but its arsenal of the chain vulcan and heavy laser II means it can absolutely wreck shop. It also supports any system, so go nuts. There's also the artillery beam, just so you can annihilate ships like they were Alderaan. You BASTARD.

Of course, that doesn't mean the ship is OP. If you read the lore, you'd notice the bit about shields. If you want to have anything more than the zoltan bit, you need 100 scrap. The power is already allocated though, I don't hate you too much

The engines are also severely under powered, and later sectors can get tougher if you don't replace your starting weapons with something more well rounded (I'm looking at you, defense drone II). The massive amounts of power needed for weapons can draw away from other systems, and the large amount of power you have at the start makes reactor upgrades more expensive right off the bat as well.

It takes up the place of the Federation Cruiser Type C, so you have to work for it. Just so you can't try and blitz with this bad boy as soon as you start. Don't want to make your game to easy for you, now do I?

Also, the guy who's suposed to be on doors starts off in O2, the prick. So you have to send him there yourself, as I am not the best at modding yet

. If I fix it I'll upload the new version, and if anyone has tips on how to do it let me know!

Death Stars have been made in FTL before. I can think of 2 distinct mods that did.
Anyway, I don't mean anything by it in regards to the quality of this mod, it's no surprise that a lot of iconic ships have been made into an FTL mod and as long as the ship itself is fine, who cares right?

Now, as far as feedback goes :
The weapons are surely to be seen as OP. Granted, the Vulcan takes forever to charge, but at the end of the line, it's still potent. And 7 starting weapon power is a lot of "free scrap" since you probably never have to upgrade the system throughout the run.
Whether this was a choice based on lore or not, I'll leave to the wayside. But personally, I'd say switch one of the guns out for a weaker counterpart.
For instance : Vulcan -> Basic laser or Heavy Laser II -> Heavy laser
In that way you are still a fairly potent powerhouse, but you'll at least be able to pull down the starting weapon power. My preference would go to the first idea.
Would give a moderate starting weapon power of 4 (on par with DA-SR 12 and Redtail) and make use of a weapon not often bought.
The way it stands now, I foresee one of two weapons getting chucked for something less of a power drain and faster than any of the two.

I know it's your first mod, but you might want to think on perhaps customizing the artillery. The Vindicator beam is fine as a weapon, but I think most of us can agree we've seen enough of it as is. And it becomes a waste of a system slot if you plan on doing a boarding strategy. A beam artillery certainly isn't a bad choice considering lore again, but you can probably do something a little more interesting with it. For instance, one of my ships has the "Partisan Beam", same length as a mini beam, pierces all shields, high breach chance.
If interested, I can provide you with the blueprints for it and tell you how to put in on your ship. Or teach you the basic of custom weaponry. Probably best to just send me a P.M in that case...

Augments : The combo Zoltan shield + Revers Ion Field is solid. Sort of feel like the Rock Plating is overdoing it though. And again, for many, it's just free scrap when the first store comes along. Getting rid of it means a free augment slot which is handy to have.

The cloaking image is a bit of an odd one too. No real negatives or positives on that one except for the fact that there actually IS a cloaking image to begin with.

All things considered though. Not a bad ship, my biggest pet peeve isn't present here (namely interior images overlapping with doors). A lot of people have made far worse for their first mod. We all have to start somewhere though...
Good luck with any potential endeavors in Superluminal !
Amateur modder and Let's player (with a substantial FTL and ItB LP featuring countless mods).
Channel link
A list of all my mods can be found here.
Top

Thank you! I decided to have fun with the cloaking image, just because it looked cool (it started off as an accident... but I liked it too get rid of it XD)
I actually went through myself and made sure that no doors or anything were overlapping... I myself hate it as well.
I understand it's a bit OP, hence why I put it as a type B, but I think I'll take your suggestions and make it into the Type C. A little less powerful, but still as fun

Glad to know I'm not the only one to find it a annoying.
And to think such instances are in the vanilla game... (unless my years of adding and removing mods broke something permanently

Also, I did end up finding a small... I suppose you could write it off as a rookie mistake/oversight : Starting drone power is set to 1. Default is at 2 for any ship not starting with the system.

Well, good luck with the C layout.
Amateur modder and Let's player (with a substantial FTL and ItB LP featuring countless mods).
Channel link
A list of all my mods can be found here.
Top

https://www.youtube.com/watch?v=Q7oDsnjjeIg did a live stream of this ship again LOL
I make a lot of lets plays of FTL, I also use mods I find on this site http://www.youtube.com/playlist?list=PL ... 06hca_PXuX
I am also a modder as well, here is my mod hub viewtopic.php?f=11&t=32269
Top
Post Reply
6 posts • Page 1 of 1