"This ship is a result of the Engis' fascination in both paint and creativity. Starting with a basic reactor, this ship relies on its teleporter and funky weaponry." 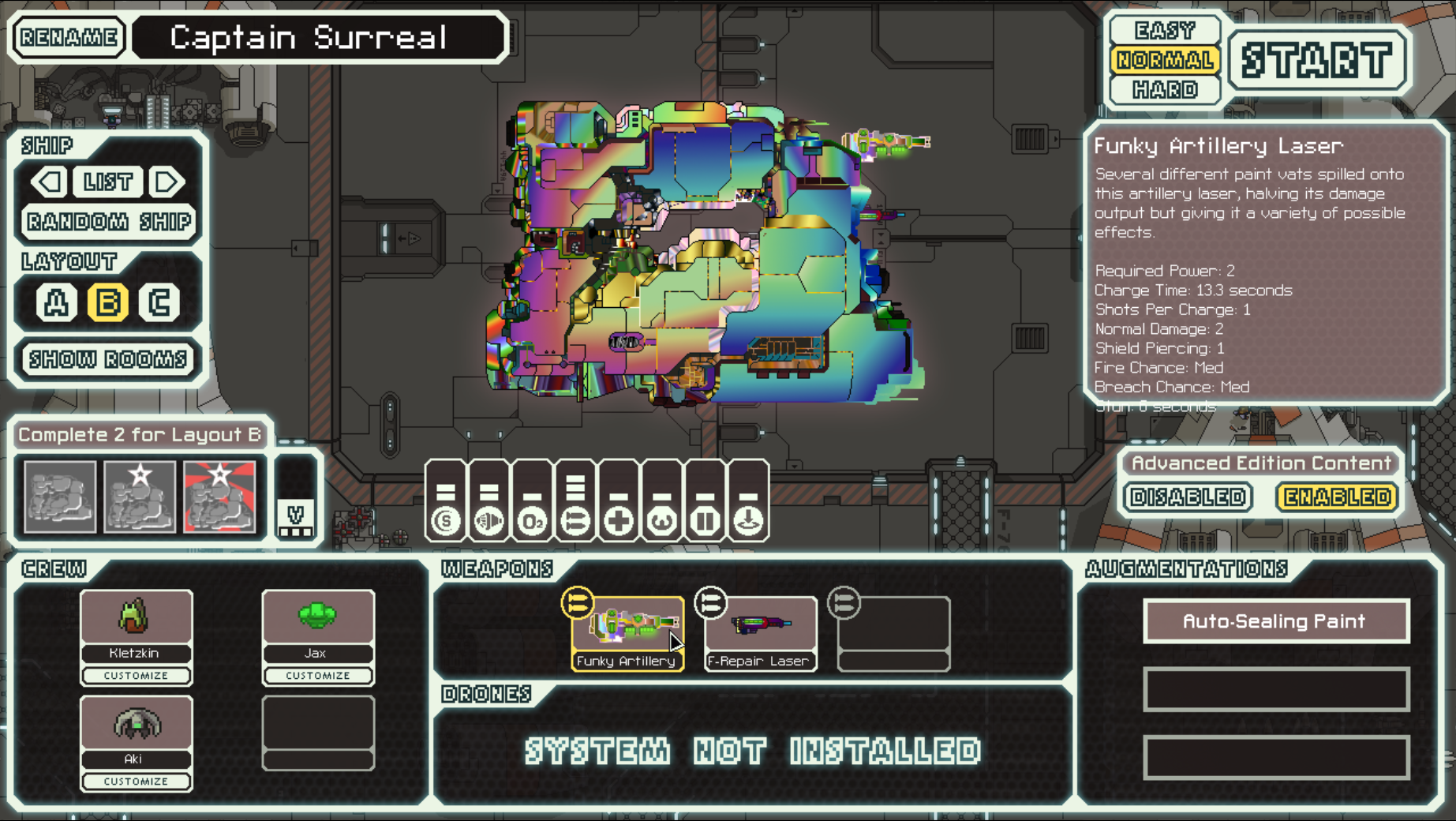 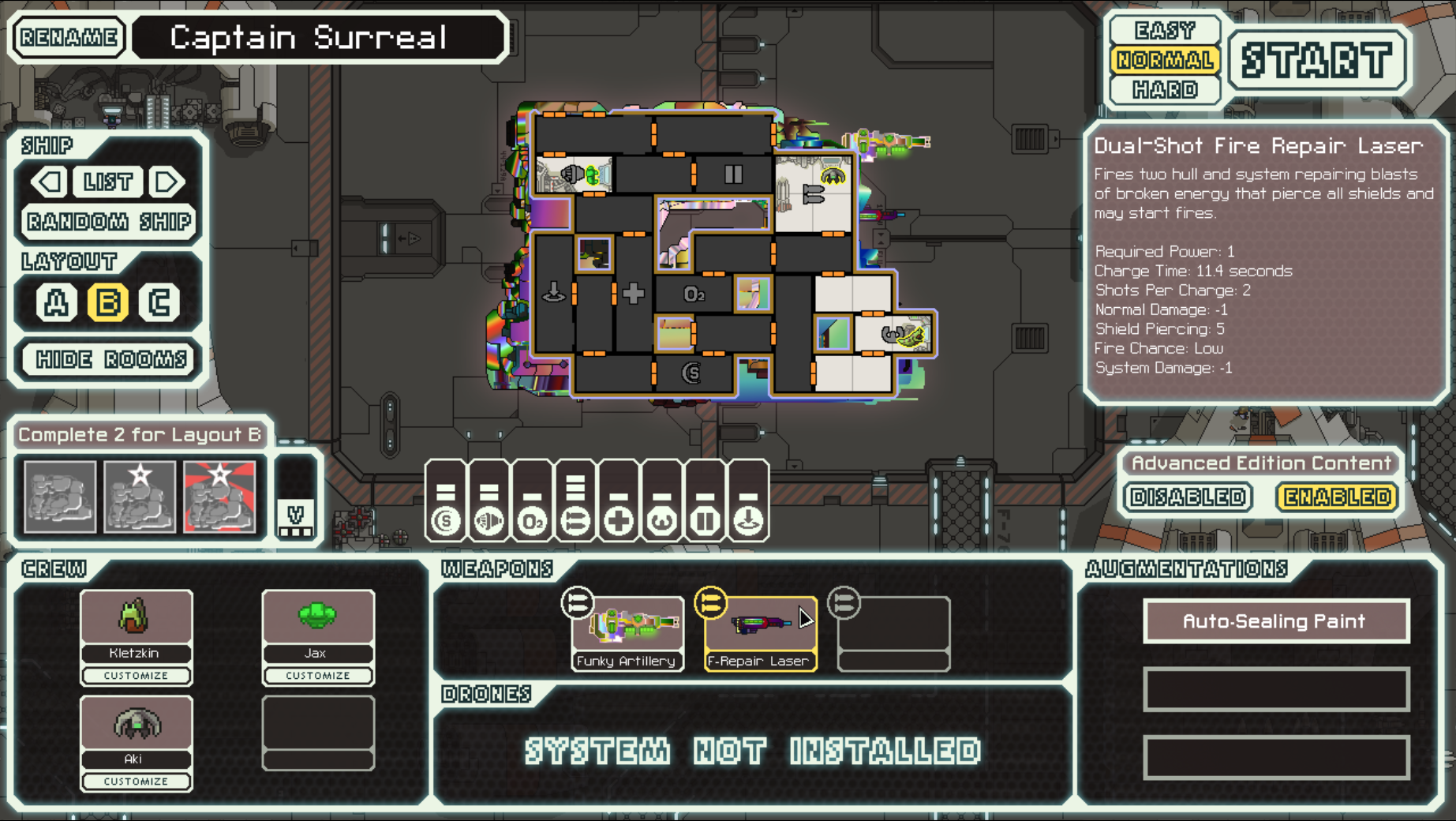 What were the design choices you had in mind with this ship? I mean seriously what is this? A teleporter that doesn't make sense with this crew? Uh-huh.

History:
What started as wanting to re-color the Engi B quickly faded into me embracing my creative self and just going for it, meshing blend fill around every single piece of the Engi B. In there among other things, is an actual blend reminiscent of the chameleon coloring on the TVR Tuscan Speed 6. Anyways, I am kind of amazed at how I pulled all that off.
Then came the stage where I finalized some layout, but the actual performance of the ship, its systems, weapons and drones was uncertain. There it hung in development limbo where I forgot about it...

For some reason, recently modding revitalized within me, and I figured I already had done most of the ship that I better finish it correctly. The ship image, layout, system placement, cloak, cloak room system glow, crew was finalized. What was left to do was to figure out what systems and how much power -- what the strategy of the ship should be.
Originally, I had intended the weapon setup to be a corrupted/slow combat drone, a basic laser with high fire chance and a teleporter. The teleporter is still there mainly because I couldn't resist how cool it looked next to the medbay (I have a soft spot for 3x1 rooms). With this ship when the question Why? is asked I have the liberty to say just 'cause it's surreal. everything that seems to be normal is completely flipped around, which is why I finally decided to release this. Have fun!

---
Some design choices I had forgotten about from before I just rolled with because I might've had some reason for them and this ship is well, this ship, so I just went with it. I removed drone control because, while I liked the drone's function, I didn't like forcing drone control to be a system. When I went drone control, there was a way to defeat single shield bubbled auto drones, and when I removed it, I didn't want that to be lost, so those weapons are what they are because of this.
---
October 8th, 2017
After hearing the feedback about the loopy doors, they're now removed. I tried changing the loopy doors to less loopy doors, but the one bug remains with loopy doors -- even with a single one, crew passing through the door going to some destination will make it seem like there are more, because it messes with that order you give to the crew. So instead, I changed the layout to something else, different now, as you can see in the image at the top of the post. In addition, I fixed some other things which you can find out about in the change log below. Enjoy!

Change log:
v 2.0
- removed loopy doors, and as a result, the layout is completely different
-- airlocks are much clearer now, though venting isn't that great
-- engine room manning station and image is different and flipped
- removed the stun chance on the funky artillery because it does nothing → the 6 second stun overrides it; it's guaranteed
- changed the starting order of crew members to now be what you'd change it to before →Slug in piloting, Zoltan in engines, Engi in weapons
- Funky Artillery's 'short' name is now, well, 'Funky Artillery' instead of 'Funky Artil.'. it does fit...
- Dual-Shot Fire Repair Laser's 'short' name is now 'F-Repair Laser' instead of 'Repair Laser'
- the floor image is now wooden brown/lavender (floor/border) instead of green/goldenrod. gives a bit of respite from the vibrant hull colors and lavender matches the hull image better
- changed shield room image so the crew member actually goes on the console
- added something to the weapon room image because there is space
- changed the hacking room image to match the door change and look better
- changed the cloaking room image so it's centered
- changed the cloaking room glow to match, and slightly edited its color
- changed the medbay room image to show more of the medbay thing because there is space, in vanilla it's partially hidden because the medbay icon would otherwise cover it. not here though :)
- "filled in" gaps in walls caused by 1x3 rooms via the room image. since the room image is slightly translucent or brighter or something I couldn't get it to match the solid black but hopefully it looks better now. will only display when the affected rooms have a system. couldn't even use trickery to put it there ahead of time...
- changed the backup battery image
- oxygen room image is changed to something... ;)

v 1.7.7-beta
- changed the "Link" in the SMM description from the Google homepage to the actual official forum page

v 1.7.6-beta
- completely changed the weapon combo:
- funky artillery laser
- 2 power, 2 damage, 1 shield pierce, variety of effects
- dual-shot fire repair laser
- pierces all shields; each shot repairs 1 hull and system damage, but also may cause a fire
- the possibility of fire is the main reason behind the weapon; I mainly looked at vanilla weapon combos
and decided on how good the weapons should be, noticing that getting through only 1 shield is not good enough.
- in terms of power, equivalent to dual lasers
- weapon control starting power capacity boosted from 2 -> 3

v 1.5.7-beta
- fixed manning glows not working properly
- shield room image console is a bit off; room_shields_11.png isn't right,
will have to fix that myself

v 1.5.5-beta
- "initial" release
- it's not called 1.5.5 based on whim; called that due to pre-release versions
-------------------
credit: for the creation of Funky Artillery Laser, I recolored the artillery laser mark I from Captain's Editon and incorporated its glow, so:
FTL: Captain's Edition by Sleeper Service, found here: https://subsetgames.com/forum/viewtopic.php?t=15663, is licensed under the Creative Commons Attribution-NonCommercial-ShareAlike 3.0 Unported License. To view a copy of this license, visit https://creativecommons.org/licenses/by-nc-sa/3.0/.

A long while ago, I was wondering if someone could design a ship that was ugly yet functional. And not just "Big box with guns" kind of ugly but more like "Fashion Faux Pas" where the colours seemed to be all wrong and all that.

I suppose this is close enough. I might give it a spin
Top

Yeah... it's not a great ship to be flying in a recording. You only have 1 weapon that does damage and it takes a very long time to even destroy the most basic of enemies...

And I can't just go and board them because the crew isn't suited for it. I know that's the gimmick of the ship but honestly... what are you supposed to actually be doing?
Top

And now my short video run: Yeah, considering what was thrown at me and how underpowered the ship was, I was not going to restart. I need something with a real gun.
Sorry mr_easy_money but it's just not a viable ship and I don't know how you can make it more powerful without removing the gimmick.
Top

stylesrj wrote:Yeah, considering what was thrown at me and how underpowered the ship was, I was not going to restart. I need something with a real gun.

the weapons there are right now aren't really what I had in mind for the ship. to be honest, I haven't really thought about what weapons there should be. I haven't watched your video, but when I do (when my mind is clear and I'm not half-asleep) I'll be sure buff the ship. Sorry the ship was too underpowered

This is why you need to playtest the ship yourself before putting it out there. It sounded good on paper but in practise, the weapons combo is bad.
Top

stylesrj wrote:This is why you need to playtest the ship yourself before putting it out there. It sounded good on paper but in practise, the weapons combo is bad.

good point. I'll be sure to change it and always playtest before uploading

in the mean time, I'll take the download link down I guess...

I've changed the weapon combo from that crappy gimmick to something with a lot more kick. Details can be found in the changelog and the new main post images.

also, I changed the title to incorporate the word "beta" as I have a feeling it might have way more kick than needed, so more changes may be made, and then there will be the full release starting at v1.0, as right now without beta it looks like there has been a ton of progress.

Users browsing this forum: No registered users and 77 guests