I've been playing a bit of Super Amazing Wagon Adventure recently (a parody of the old 80's game Oregon Trail which I've never played because it's an American thing) and during one of my FTL video runs I thought "I should make a ship based off Oregon Trail."

So I scoured Google Images for a nice pixellated covered wagon that had some detail to it and couldn't find any so I said "Eh, I'll just splice some hulls together" and after grabbing some Lanius ships, this was the result: There's a story involved as to why the ship looks like that. You're flying an AI ship and you find some strangely-dressed Lanius looking for Oregon, because they've read it in Human literature and saw an "interactive documentary" on it. So they made a wagon and set off for that place which just happens to be the Last Stand. So you decide to help them out and they'll fix your ship. It goes into more detail during the initial pickup event. Gimmicks:
All navigational assets are in the front end of the ship. This means every time you get a new crew member, they'll be in the pilot's seat. Luckily you have a Clone Bay at the start so if they die, they'll be in the proper section of the ship. I recommend you keep at least one person alive in there so they can patch up the ship otherwise...

You have a 3-power, missile-free Repair Bomb. Fixes 2 system damage and damages enemy crew for 15HP. Can be used to slowly kill your Lanius pioneers so they move into the main section, get rid of CE boarders in isolated rooms and if you want to wait forever, wipe out enemy crews.
If your hull is breached and no one is at the front, don't worry the bomb will repair any damages. Not the breach though. So you'll have to make a tactical decision early on to keep the guns up or to fix the systems.

Also, it's an AI ship so it self-repairs, has no air, etc.
Because CE and SMPK usually raises the price of Life Support, I've decided to leave it blank so if you're playing Vanilla and see Oxygen for sale, you can buy it for no price. Not like you'd want to use it. I defeated the Flagship with the starting crew no problem.

The front section of the ship is highly vulnerable to attack. The pioneers couldn't extend the barrier around the AI ship. So don't expect to do things like grinding crew XP or laughing at the Beam Master because they can kill you if they attack the front.

Final notes:
Have fun and happy pioneering on the trail! Don't try fording any rivers and watch out for tuberculosis!
Oh and the sounds for the Trail Bomb come from Starsiege Tribes. I've extracted a whole soundpack and I'm making custom sound combos from it.

OP repair bomb, bad ropes thing sprite, no life support, and clonebay?
I, THE GREAT PAPYRUS, WILL FLY THE SHIP AND...
WAIT... I'VE ALREADY SAID THAT BEFORE...
ANYWAYS, I WILL DEFEAT THE REBEL FLAGSHIP AND BE THE ROYAL GUARD!

ALSO, I WILL TAKE MY BROTHER SANS WITH ME!
HERE HE IS

SANS IS READY TO KICK SOME ASSES!
Top

The repair bomb isn't that OP. When I did my test run on Normal, I kept a Lanius in the piloting area while everyone else sat in the wagon. There were plenty of close calls and better guns to be found on the trail.

It's mostly used to speed up system repairs after a battle and kill any stray boarders on your ship that the airless environment isn't killing.

Oh and Papyrus, you should bring Undyne along as well to help fly the ship.
Top

The repair bomb isn't that OP. When I did my test run on Normal, I kept a Lanius in the piloting area while everyone else sat in the wagon. There were plenty of close calls and better guns to be found on the trail.

That bomb kills crew, repairs systems, and doesn't need any missles. How is it not OP? I even killed 2 zoltans with it.

stylesrj wrote:Oh and Papyrus, you should bring Undyne along as well to help fly the ship.

Srul wrote:That bomb kills crew, repairs systems, and doesn't need any missles. How is it not OP? I even killed 2 zoltans with it.

It does only 15 crew damage per hit. So you could sit there and kill off enemy crews while they can't get through your shields... in theory.
But you have exposed rooms and someone like the Beam Master can tear you apart slowly as well.

Besides, it's boring and unnecessary to waste time with a teleporting repair bomb in clearing out enemy ships. You can't even use it in conjunction with your guns because it'll fix up the systems you just damaged.
Like I said, I did a test run and I found little use for the bomb even before I found the good guns. The Advanced Flak is the real OP gem here.
Top 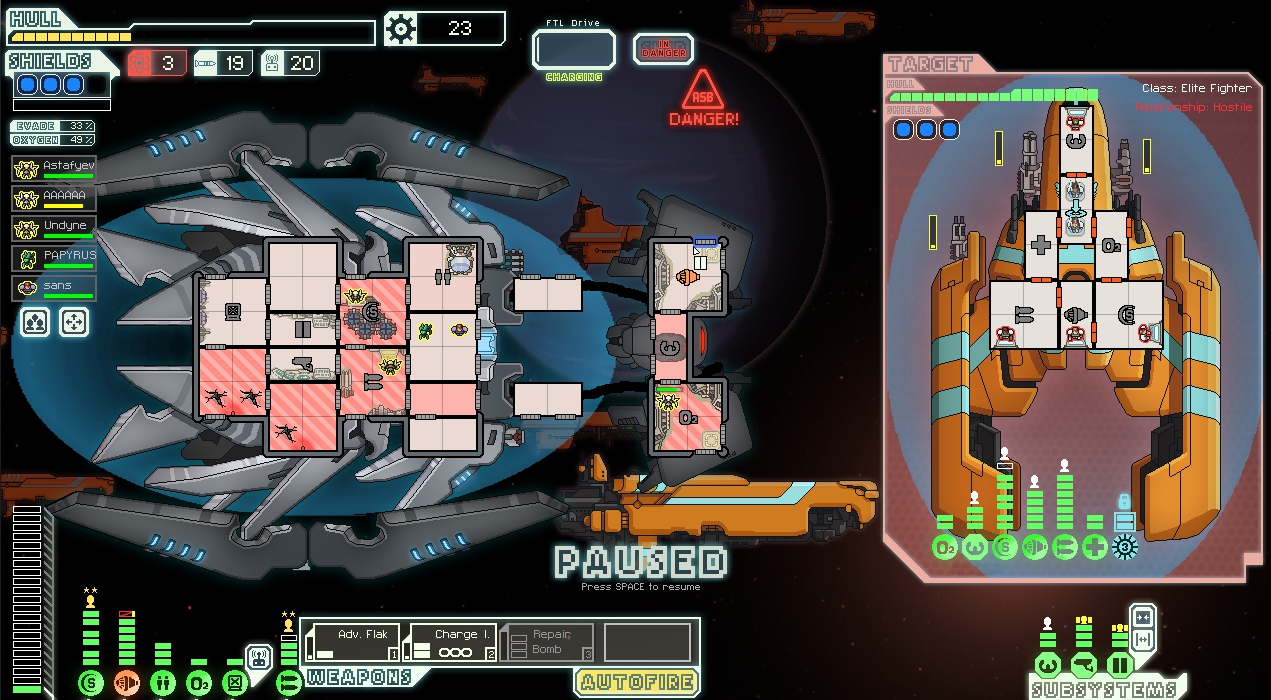 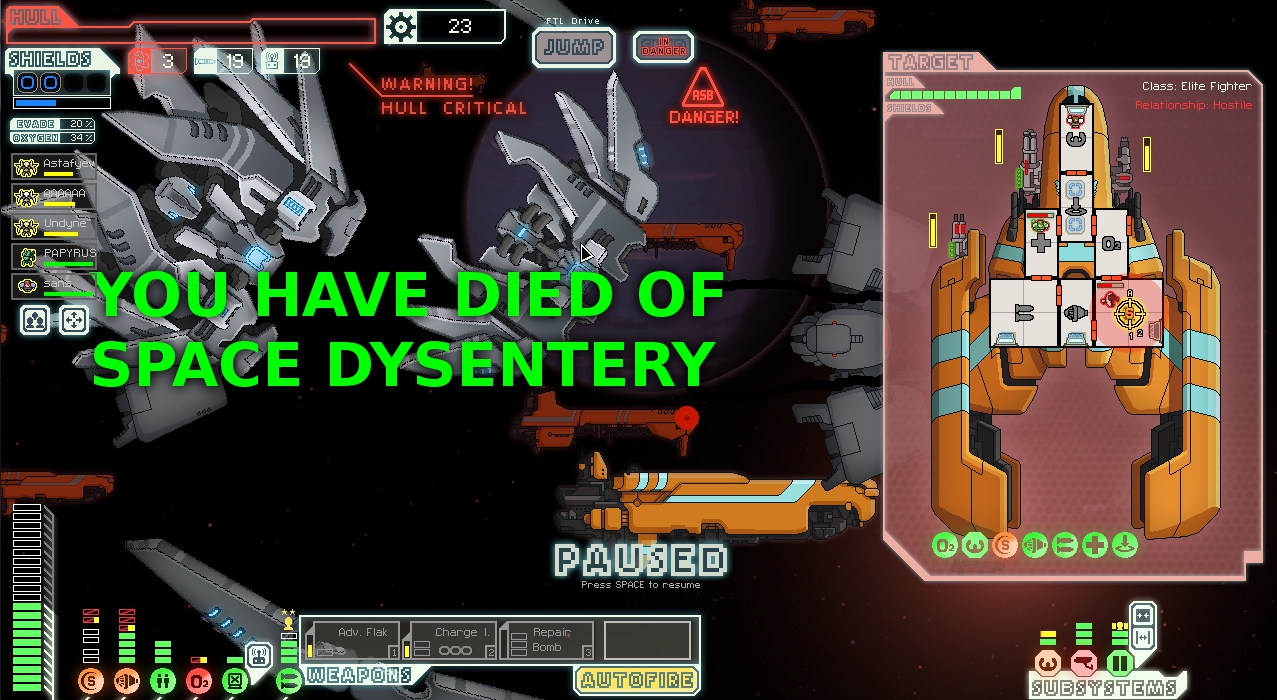 By the way, that "You have died" thing is actually part of the gibs.

Apart form fixing up those reins, version two will probably include random events where you jump to an empty beacon (or I'll just replace all idle beacon text) and it kills off one of your crew at random with a line like "You have arrived at this beacon. Suddenly one of your pioneers dies of space yellow fever" or "You arrived at this sector. There's a space river in your path so you try fording it. One of your crew hits an asteroid and dies however"

Why? Because it's not Oregon Trail without being unfair at random.

Of course that might annoy a lot of people and it involves a lot of scripting so I'll probably not do that.
Top

Well, I made a video run of the ship and updated it to Version 2.
What does Version 2 have? well I fixed up the events a little bit so that you start with the Pioneers via event rather than have an augment which is bugged to give you Lanius each time you hit a Vanilla Civilian sector. This does mean if you install this mod and then play as anything but the Lanius A, you'll get 3-4 free Lanius at the start. So don't do that...
Also a few grammatical changes in the introduction and some advice on how to maintain the front section before you kill everyone to put them on the wagon.

What can be expected in the future? Well I'm not sure if the shields should remain at 2 layers or if I should bust them down to one layer. In my video run, I never seemed to go above two though. But then again it was probably due to my luck to get some decent guns.

Also, I might change the ending text to reflect a more Oregon-Trail styled ending rather than the usual "You blew up the Flagship and won!"
Top
Post Reply
16 posts