Origin
I had a few ideas for mod ships, and so one night after being inspired by Biohazard063 in the comments of one of Anistuffs' videos to get into modding, I went ahead and made a stealth ship. I didn't really have any solid plans for the gameplay I wanted, I just threw in some weapons and systems that aren't too common on vanilla ships. Then, after receiving some feedback (from Ani and Bio), I changed a lot of things, including making a custom weapon with help from Bio, and after further feedback, I nerfed a few minor things and modified an event to make use of the custom fire weapon. Eventually there was a day when I felt it was ready for publication, after being over 7 weeks in development (counting a couple long breaks). That day was yesterday (lies, it was several days ago), but I wanted to keep Ani pressured to make a video before writing this forum post 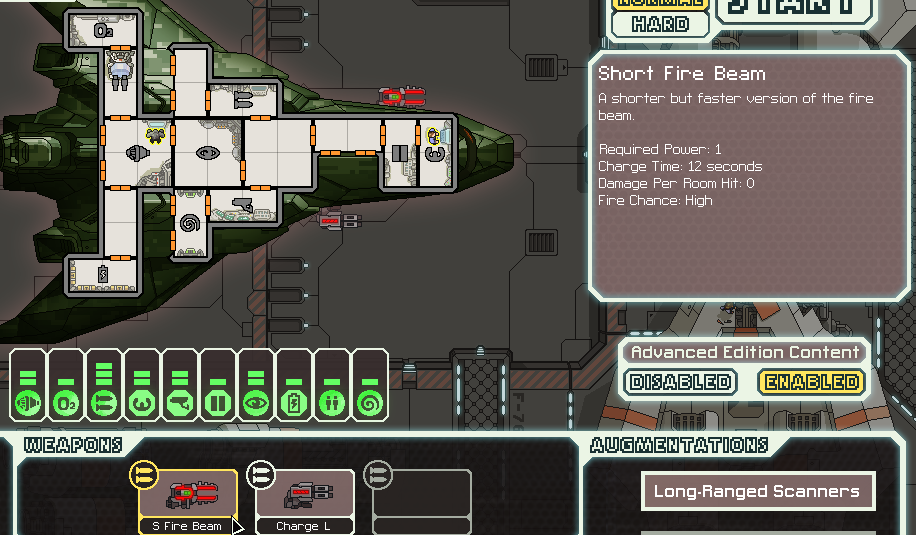 (Don't worry, I fixed the floor image at the engine room's airlocks, I'm just too lazy to take another screenshot)

Strategy
So, the ship starts with a pretty strong offensive, and there are a few different strategies you can employ. It has level 2 cloaking, so you can either use that for a pre-ignited alphastrike (probably best if the enemy has an offensive drone), or you can simply use a single-level cloak to dodge the opponent's shots with 80% evasion. Mindcontrol can be used to assure both shots from your charge laser hit, or it can be used to distract the enemy crew while their ship is on fire. Quite often you may not want to actually fire both shots of the charge laser just to make sure you don't deal any more hull damage than you have to.

Againt AI ships, if they have offensive drones and shields, you're most likely screwed, since you can't reliably take down their drone control with only two shots and fire. It all comes down to luck against those ships, and most often it's best to simply run away if you can. Even when they don't have drone control, taking care of their weapons is heavily RNG-dependent.

Other useful info
The ship starts with only 7 reactor power but up to 10 things to power, so the backup battery is quite necessary to use if you want to utilise mind control. The ship only has 3 weapon slots (and only 2 drone slots if you buy drone control), so I guess that's another weak point.

The ship replaces Stealth A.

The ship should be compatible with other mods, however it does not have a room assigned for artillery, so if you're playing CE make sure not to buy artillery.

Credit
Kartoflane : For creating the Superluminal program
Biohazard063 : For helping me get into modding, teaching me how to do stuff, and giving feedback. (Also I copied and just slightly modified his formatting for this post

)
Anistuffs : Playtesting and prompting me to keep going with the project when I had forgotten about it
Last edited by fdagpigj on Mon Jan 09, 2023 11:59 pm, edited 3 times in total.
My ships
Top

So you finally got around to releasing it.
Well then, welcome to the modding community.

Seeing how ship mods are the last mods that should be loaded in, adding the following code to the blueprints.xml.append will make it so artillery doesn't show up in stores :

<mod:findName type="systemBlueprint" name="artillery">
<mod-overwrite:rarity>0</mod-overwrite:rarity>
</mod:findName>
It's a slightly more elegant solution rather than just saying somebody shouldn't buy it.
But as you said, should only concern those playing with mods adding artillery as a purchasable system like CE.

Like the fact that you did end up recoloring the hull, nice color too.
I'll probably end up doing a showcase as well at some point. I'll let you know.
Amateur modder and Let's player (with a substantial FTL and ItB LP featuring countless mods).
Channel link
A list of all my mods can be found here.
Top

In space, nobody can hear you burn

Also, add a bunny to your profile pic because bunnies.
Anistuffs - The Indian Let's Player.
Here's my Youtube channel with over 1500 LP videos: https://www.youtube.com/user/Anistuffs
Why not pop over and say hi

Biohazard063 wrote:Seeing how ship mods are the last mods that should be loaded in, adding the following code to the blueprints.xml.append will make it so artillery doesn't show up in stores :

<mod:findName type="systemBlueprint" name="artillery">
<mod-overwrite:rarity>0</mod-overwrite:rarity>
</mod:findName>
It's a slightly more elegant solution rather than just saying somebody shouldn't buy it.
But as you said, should only concern those playing with mods adding artillery as a purchasable system like CE.

Yeah, I know I could do that... do you prefer unavailable systems not showing up over the chance that someone would play another ship with this mod installed (just for the small chance of getting the short fire beam, or whatever reason they may have)?

Biohazard063 wrote:Like the fact that you did end up recoloring the hull, nice color too.
I'll probably end up doing a showcase as well at some point. I'll let you know.

Yeah, I didn't bother telling you I recoloured the hull, it was so easy

And, now I'm looking forward to seeing your showcase

Anistuffs wrote:Also, add a bunny to your profile pic because bunnies.

Dangit, I was going to make it the shit image, but the file was too large and I was too lazy to crop it, so you win this one

Not a huge update but I think it makes it slightly less powerful which is always a good thing even if it wasn't extremely OP to begin with.
My ships
Top
Post Reply
5 posts • Page 1 of 1