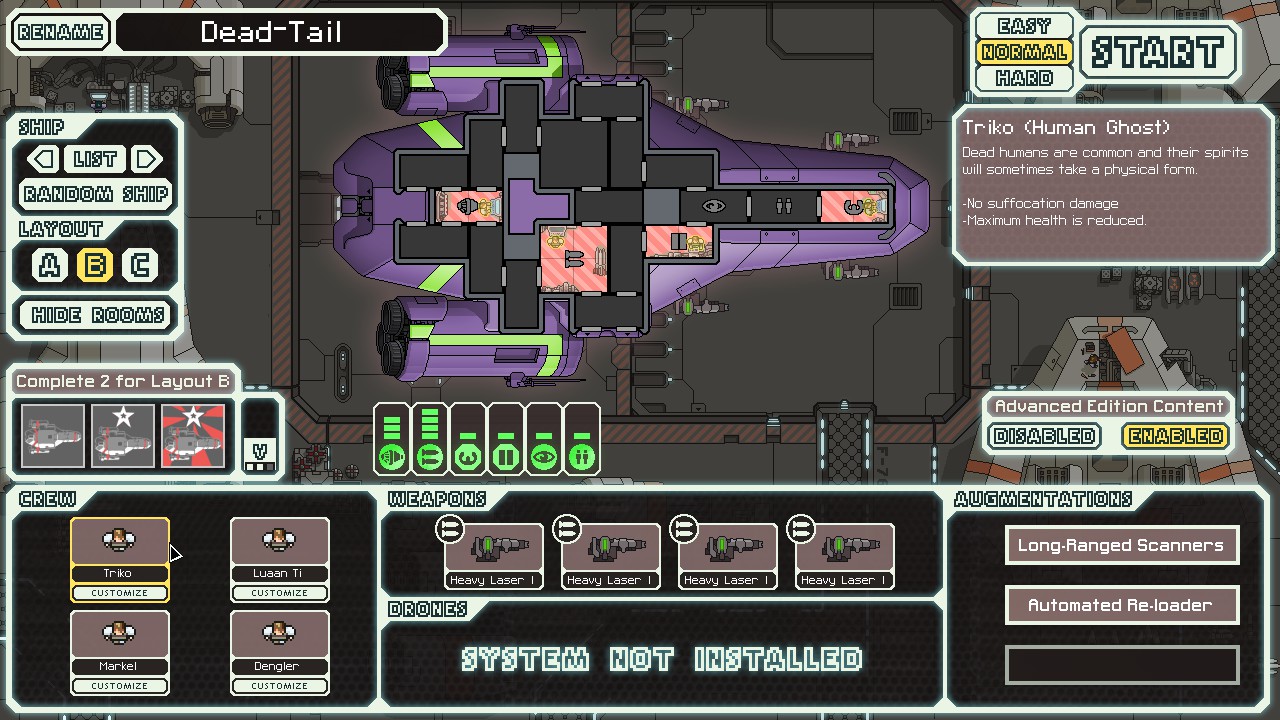 Maybe mixing the problems of the Red-Tail and Stealth Cruiser with a coffin wasn't the best thing to do, but I give it to you anyways. This ship has no story. It's just a ship I made to get familiar with Superluminal and modding.

by stargateprovider
A very interesting idea and an awesome ship!

My very first build with this ship had no systems except the engines, weapons, medbay, and piloting. When that run ended in sector 3, I added cloaking, increased piloting to level 2, and replaced the medbots with a second reloader. When that run ended in sector 4, I reverted the piloting and augments, added level 2 doors (didn't really have much of an impact on the second run, but I did it to make it more coffin-like for boarders), and decided to be generous with the shields by increasing system power to 3 instead of 2 (a whole 20 scrap in savings) when you buy them. Then I uploaded the .ftl file without testing it. I updated the post now that I tested it and had a really lucky run.

I want to note that something here is extremely cheap.

by RAD-82
Updated for Advanced Edition!

There are a few changes to the starting conditions of this ship. I don't think it really matters.

I tried to do a Normal test run with the new ship. I didn't actually get to do much testing, as I made it to the end of sector 6 without buying anything other than shields and drones. I ran out of fuel because I just gave away 4 fuel in two separate events before landing on the exit beacon with none left. Without having acquired any extra firepower, I couldn't fight the rebels for fuel because I needed a 100% hit rate, which I obviously wasn't getting. During this run, I acquired a human and a mantis; I kept my clonebay active for them.

Seriously had a lot of fun, and I lowered the amount of swearing for you, the only word being dick (as in that ship using the mind control on my guy is one LOL)

by RAD-82
Ahh... the sound of multiple Heavy Laser impacts.

This ship definitely has the easiest start of all my ships, despite the lack of shields.

I'm surprised you didn't buy the Flak II, but the RNG was nice enough to give you exactly what you were looking for to pierce shields.

This ship definitely has the easiest start of all my ships, despite the lack of shields.

I'm surprised you didn't buy the Flak II, but the RNG was nice enough to give you exactly what you were looking for to pierce shields.

The flak was nice, but the 4 heavy laser impact was just so satifying. Honestly so much fun.

by BrenTenkage
https://youtu.be/3cju4jUDroQ good times, always nice to go back to a classic
All times are UTC
Page 1 of 1
Powered by phpBB® Forum Software © phpBB Limited
https://www.phpbb.com/