by Chrono Vortex
I'm not one to judge others' artistic ability or preferences (especially considering my own), but I couldn't help but notice that the cloak image wasn't like any of the others. I had some free time, so naturally I used it to undertake the fairly simple task of making my own cloak image for this ship just to satisfy my own tastes. The original cloak idea is interesting, but since this is your mod I don't want too keep this thing to myself so I threw it up on the internet in case you want to use it. I also revised the glow around the hull while I was at it. It looks like you forgot to remove that while you were splicing, so I didn't bother fixing the glows merged onto the solid colors. That would've taken significantly more time than I had. If you do wind up using these, they're not the same size as the originals, so they'll need some repositioning.

by 5thHorseman
No offense taken. I didn't make the ship (so the glow is not my fault

), and the cloak was just to be different. The thing I like about it most is that, if you have 3 weapons, 3 of the little ships appear to be armed with big guns.

That said, I always thought I'd remove it, as it does tend to get in the way and busy up the screen. I've been considering doing a Potential run, maybe I'll throw your versions in the mix and see how they fly.

by TaxiService
I took the liberty to attempt removing the glow from the ship sprite, and record myself while doing it so that you guys can see a method for doing it! This is the video and here is the sprite.
For some reason the existing glow had some weird colours in it, so i applied a new one. o_o 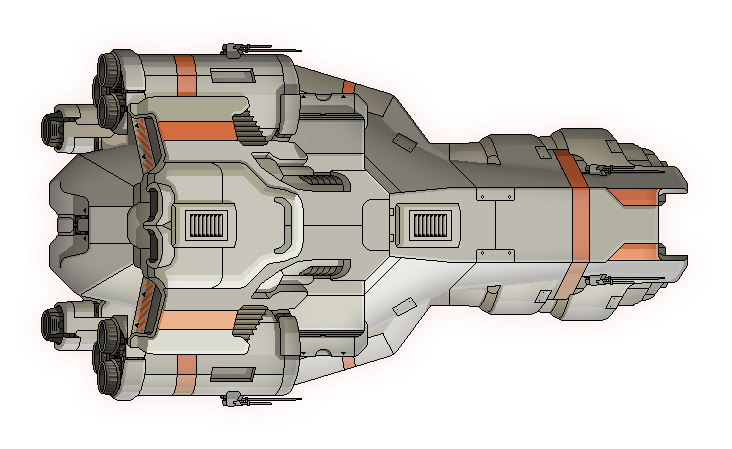 There were still a couple of things i would've liked to modify but i don't have time at the moment.

TaxiService wrote:For some reason the existing glow had some weird colours in it, so i applied a new one. o_o

Yeah, SOME reason. Totally not my fault.
In any way.
Whatsoever.

I knew you would come over here and make something better that mine...

by TaxiService
It's probably not even your fault! It didn't look wrong until i tried to take a sample of it. Those weird colours were mostly around the edge of the glow, so I guess it might just the way pixlr handles transparencies.

I wanted to show you guys a way to remove those kind of glows. XD Posting the ship was just a consequence of working on it in the video!! I mean, it would've been weird not to post it!

Like "hey why are you keeping it to yourself, taxi!?"

I should probably write a text version with some images though.
...or not. I mean, we could just say "remove the glow before splicing a ship" somewhere.

TaxiService wrote:It's probably not even your fault!

Yeah it is, I'm way too lazy to learn how to use something that actually works like GIMP.

TaxiService wrote:A-and sorry yo!! :P I wanted to show you guys a way to remove those kind of glows.

You're too good! It's impossible to keep up!

by 5thHorseman
You're BOTH good.

...when I fix the fact that the Potential is essentially a death trap in Hard Mode unless the game gifts you several guns in the first sector.

by stylesrj
Well, I decided to make a run with this ship (finally!) and I have to say, I love overcharged reactor ships.

I had many close shaves in the early sectors, but once you get a decent gun (i.e., any) then you can get the devastation ball rolling.

by 5thHorseman
The Potential has been updated, to fix some niggling problems, incorporate the new hull and cloak graphics, and make it possible to win on Hard.

by stylesrj
Well the addition of the Mini Beam does make it a little easier. I just went on a Normal run and well, I thought I wouldn't make it past Sector 1. Shields got bombarded a lot, boarders always entered Weapons (so I had to initiate Emergency Vent Protocol 23 a lot) and well everything was a total fustercluck.

But I pulled through, even with most of my Scrap going to repairs to that hull. Fought the Flagship with the Dual laser, Mini Beam and Flak I. Slow and steady won the race. Especially when the slow had a teleporter and two Mantis warriors.

And a Cloaking Device. But nothing else special like Drones or Hacking or Mind Control so each phase of the Flagship had their crew still onboard. I don't know how I made it, but I did and with minimal damage too.

Had fun, would try again but on CE Normal or something.
All times are UTC
Page 13 of 17
Powered by phpBB® Forum Software © phpBB Limited
https://www.phpbb.com/