*Old hanger image. You should have a Lanius who is replaced by 7 Zoltans when you start the run. 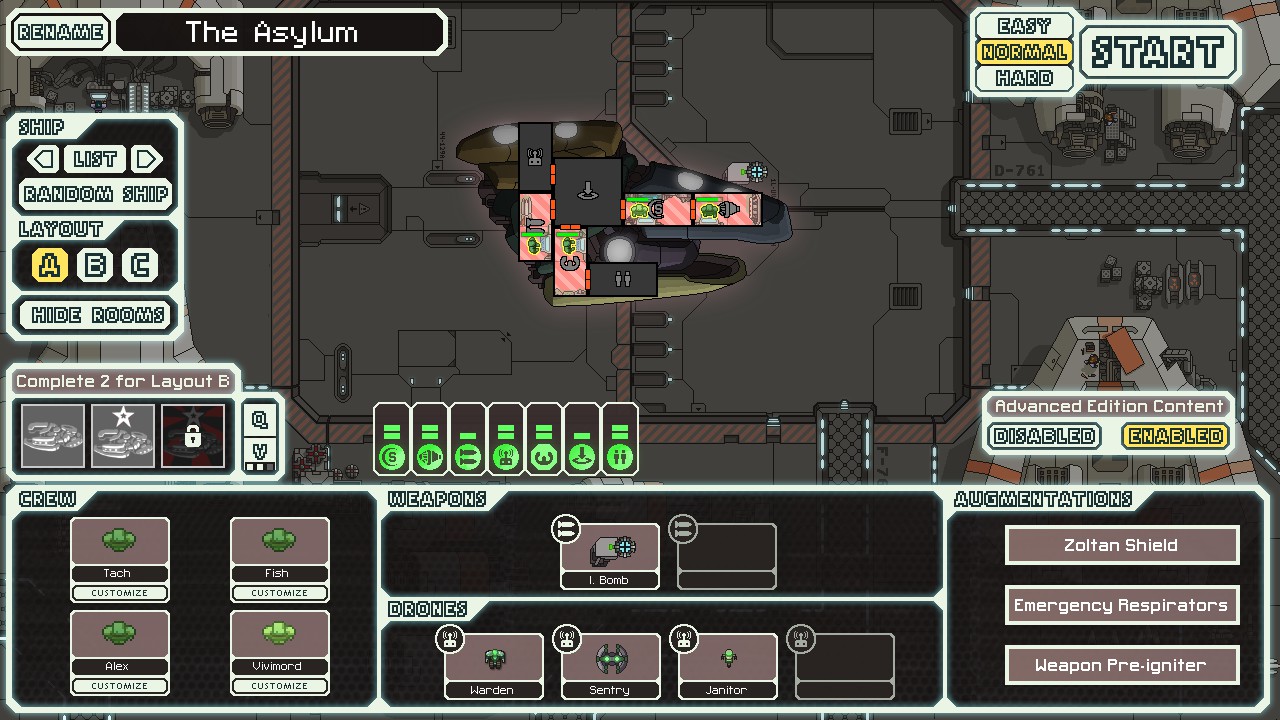 It is finally here! A dedicated Zoltan suicide bomber. It is so dedicated that it left out so many systems. This ship cannot support any additional systems. If your clone bay isn't running, then you may be losing, unless you converted yourself into a Lanius ship.

Features custom Anti-Personnel Drone and Shield Overcharger drones that use one power, plus a repair drone that uses no power.

Mod Compatibility:
-All additional systems have their prices set to 999 scrap. Clone Bay and Hacking have had additional alterations. Don't play other ships with this installed.
-Something about the start of game event and start of civilian sector event. If Asylum is loaded last, I doubt there would be any issues. There aren't really any non-ship mods that mess with that sector_data stuff, aside from the Universal Starting Beacon, which this should be compatible with.

Pre-AE.1.2 - Known Issues:
-The game will crash in the hanger if you are customizing crew when it dies. It is alright to rename them if you don't use the customize button, but it may be best to start the game first, then rename your crew if you choose to. If your crew die in the hanger, they will start to clone when you begin the game.

Interesting. No O2 room. I like those kind of ships. Quite challange
R4V3-0N, a dreamer.
Top

That's unfortunate. I didn't think about that event.

I blindly updated the mod. Slugs shouldn't be able to fully disable the clone bay now. I don't know why the devs didn't allow the improved clone bay to work like the improved medbay.

Preview of this ship by Biohazard063: http://youtu.be/neJmnay8VTg?t=27m31s

In this video, you will see a little black box. I don't have that on mine, so it seems to only happen for some people. It is there because I didn't bother to add a floor image. That will be fixed in the next update. I'm pretty sure I have other mods that will have that problem, so I'll have to look through them all now.

I've been contemplating changes to this mod for some time.

1) Instead of starting with 4 Zoltans who can die in the hanger, I'm going to place a ghost who won't die. Upon starting the run, the ghost will be removed and replaced with Zoltans. I'm considering 8 Zoltans, but if people think that is too much, then I'll drop it to 6.

2) Enemy hacking! This is rather hazardous if you don't get a Backup DNA Bank. The Zoltan shield will hold off the hacking for a little bit, but you aren't likely to end the fight before your shield falls. The ion bomb might be able to protect you from it, but I'm considering breaking the enemy hacking (tactic learned from DryEagle) at the start of fights, then leave it to the player to prevent the repairs with their borders.

3) Level 4 Clone Bay? I've never tested it, but I've heard it allows instant cloning, IIRC. I'm not sure I want to allow that, but it is an option for people to give opinions on before I update the mod.

3) Level 4 Clone Bay? I've never tested it, but I've heard it allows instant cloning, IIRC. I'm not sure I want to allow that, but it is an option for people to give opinions on before I update the mod.

Oh it is as OP as you think it is.
I loved abusing that back when Captain's Edition Infinite allowed Level 4 medbays. Switching to a Clone Bay afterwards meant easier and quicker boarding missions. Damaged troops? They'll be fine next jump as it heals them completely as well.

So keep that in mind, a Level 4 Clone Bay is not to taken lightly.
Top

I couldn't start the ship with a ghost, because that requires a blueprint. I didn't want to overwrite that blueprint for CE users, or even use the CE blueprint, so I used a Lanius instead. The start of the run will remove one crewmember (the Lanius), and give you 7 Zoltans. I don't know how much help those extra Zoltans are, since you are still limited by the clone bay re-spawn rate.

The clone bay can be upgraded to Level 4 now, but it is expensive. This will allow instant cloning, plus massive healing when jumping.

Enemy hacking will start out broken now. I don't know how necessary that was, but I did it anyways.

How exactly do you mod to make it allowed to have more systems then normal? (If I remember right, weapons, shields, engines, clone bay, med bay are the only things able to do the change)

Thinking off possibly making one of my ships start with the clone bay level 4 while being hindered in other ways for the start. Also make it optional to buy it.