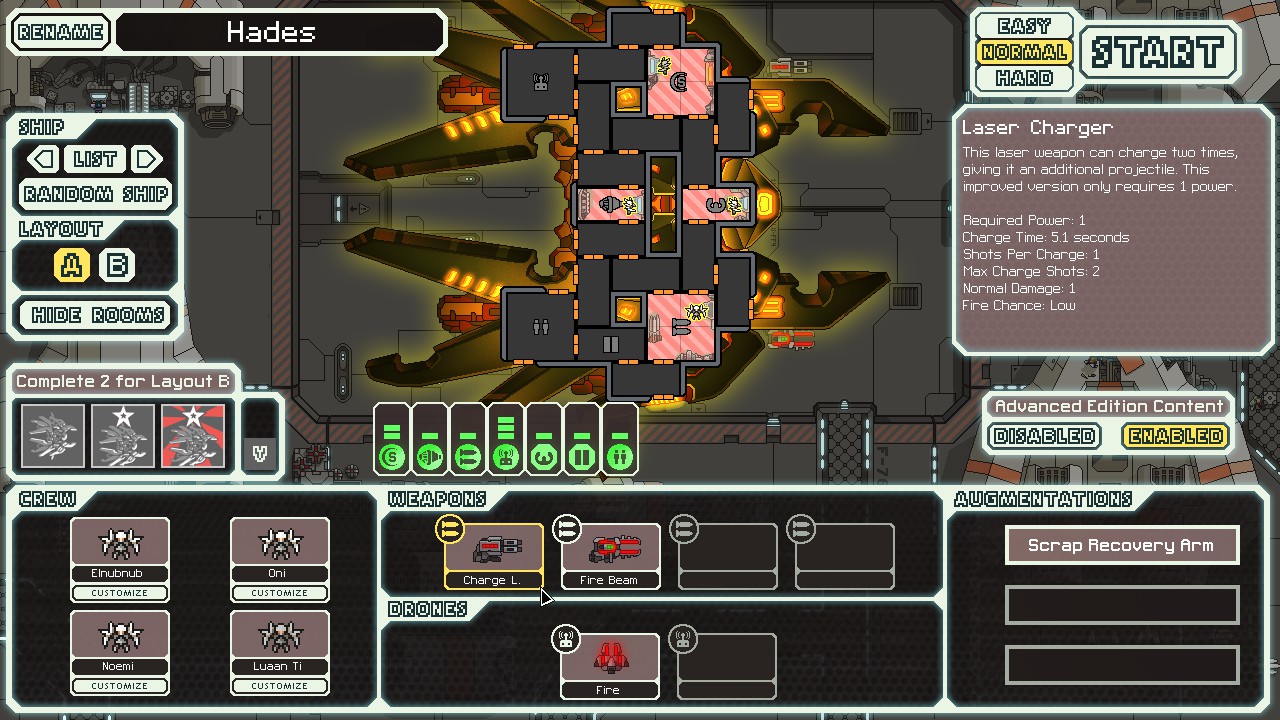 Initial Release of AE.1:
-Melt down cruisers for scrap!

Update for AE.1.1:
-Added code to help ensure that the oxygen system is available in case a prior mod removed it
-Added two more starting crew members
-Buffed starting Charge Laser; now has the same fire chance as Dual Lasers, as opposed to none

Re-upload for AE.1.1:
-Adjusted ship offset, since FTL 1.5.12 adjusted The Shrike's position to match Kruos
-No need for re-download, unless you are obsessed with the ship position

Gameplay:
Your ship burns hot, consuming the oxygen and making the metal plating glow bright from the heat. You use fire beams to assist your Lanius crew in melting down other sources of metal. Since you melt metal indiscriminately, you don't have sensors to check if your targets have biological units.

these ships aren't as big or as complex as escort duty or frankestein but they're always fun...
especially fire themed ships.
god I love 'em!
Top

Dont you think you should add one more Lanius? The lack of O2 means you wont be getting any new crew for awhile. Just wondering.
Top

Very good looking and balanced ship, I love fire weapons so I'll probably end up liking this ship too. You should definitly add an extra Lanius though. Getting crew for this ship is hard.
EDIT: Forgot to ask, can you get an Oxygen system on this ship?

I would suggest starting with weapons level 2 so you can chose between using the charge laser and the fire beam.
Top

Yes, you can get an Oxygen system, assuming no other mod has removed it from the shops. The vanilla files actually have it free, so it won't cost you anything should you find it and want it. I don't know what CE has done with it, beyond naming it Life Support, as I've never looked at those files.

I feel two crew is sufficient for adding more challenge to the ship. Maybe it doesn't need that extra challenge, so I might add another Lanius in the future, should the ship need updated for some other reason.

Maybe I did make the starting conditions a bit harsh.

Did a few runs with it. Here's my feedback:
The ship is slightly underpowered, and you're pretty much screwed if you encounter one good Auto-Assault or Auto-Scout.
- Increase weapon power by 1.
- Add a Basic Laser
- One extra crew member. (Lanius, most likely. Since any other race will slowly die a horrible death by asphyxiation.)

I've uploaded a blind update. As long as I didn't include typos, it should be fine.

sovietbear wrote:Did a few runs with it. Here's my feedback:
The ship is slightly underpowered, and you're pretty much screwed if you encounter one good Auto-Assault or Auto-Scout.
- Increase weapon power by 1.
- Add a Basic Laser
- One extra crew member. (Lanius, most likely. Since any other race will slowly die a horrible death by asphyxiation.)

I did not increase weapon power. The ship isn't meant to have much in direct offense. Some ships don't even have the ability to fight Auto ships, so I don't feel the need to buff this one for it. I did buff the starting Charge Laser, since the original one provided by the game has no fire chance like other laser weapons. I also increased the charge time by .4 seconds, so it is almost as fast as Dual Lasers now.

Since I didn't provide the requested boost to offense, I provided two more Lanius crew members, so it should be easier to fix things now.

I added some more code to ensure that the oxygen system will be available in case a prior mod removed it. I also increased the cost of the system to be 5 scrap, so it is no longer free.

The I haven't seen any bugs in the 1.1 version yet, so good job on that.
It's pretty balanced now I'd say, did a pretty okay playthrough with it. (Sector 5)

Actually got 8 Lanius crew, so I didn't need an O2 system. The crew is Fallout 3 themed by the way (just noticed I spelled 'Shrapnel' wrong