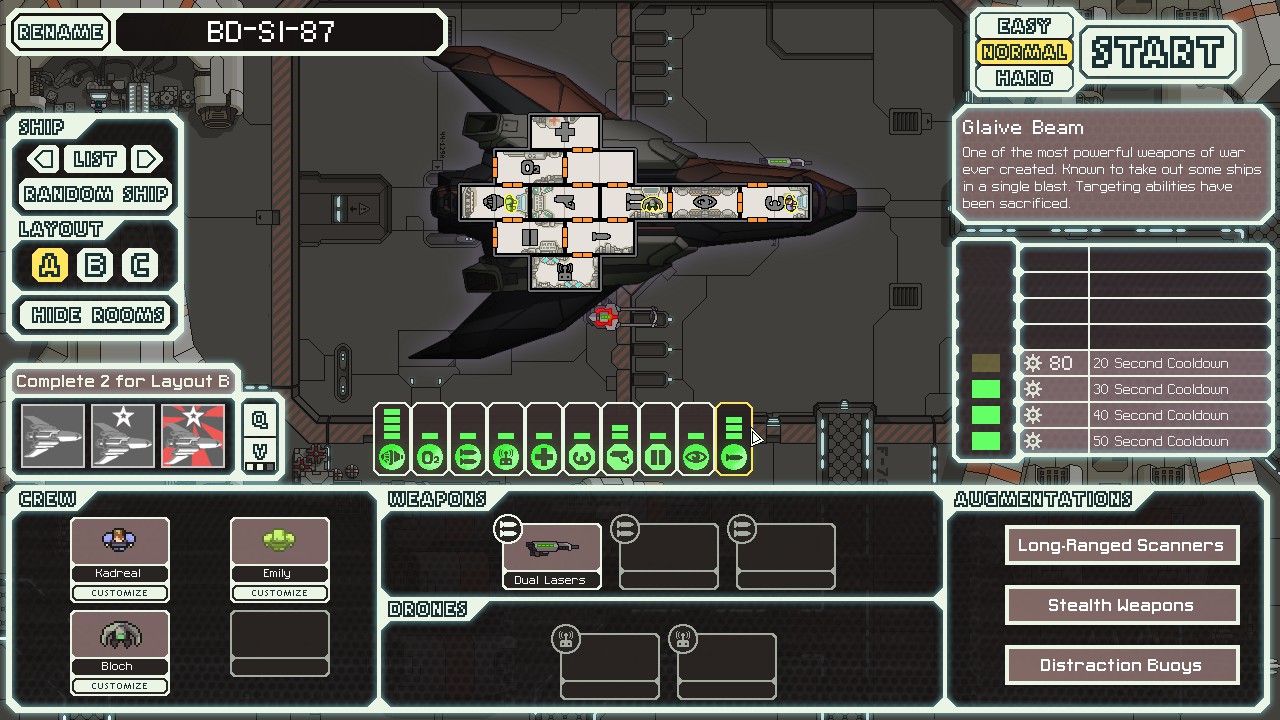 Initial release of 1.0:
-Stealth Interceptor ready to fly under the radar

Update for AE.1:
-Updated for AE compatibility
-Added starting drone system; this allows the teleporter, hacking system, and mind control to share the same room without fear of overlapping, since you only have one system slot left
-Still no shields, and you can't have a backup battery either
-Minor buff to the artillery Glaive Beam

Update for AE.1.1:
-Shields are now possible, due to necessity for the Zoltan Shield and Shield Overcharger drone

No one knows what BD stands for. Some think Badly Designed, others think Barely Detectable, but most agree that SI is for Stealth Interceptor. The #87 is a mystery, as the size of the ship is actually 82% of the normal Stealth Cruisers. Some fool fused a Glaive Beam onto the wing so that it can't be removed without causing massive damage to the ship. While they did make the power input variable, allowing for a slower charge from less power, they forgot to include controls for targeting. There is no way to stop the weapon from discharging when it is ready.

As of AE.1.1, this ship can now get shields, but it costs 450 scrap to buy. It comes with full system power, meaning you actually save 5 scrap.

This .ftl file removes the backup battery from shops so you don't waste money trying to buy something you can't use. It also tries to remove the shield system from shops, but that no longer works, so it is also expensive.

Credits: (Copy & Paste from my Hulk topic)
Slipstream is good for giving credits to.
I'd also like to credit Notepad and my image editing program, Jasc Paint Shop Pro 7.
Of course, FTL gets credit for the resources it provides.
Last edited by RAD-82 on Fri Sep 22, 2017 8:41 pm, edited 5 times in total.

Mod is ready to be moved to working mods.

I actually played it this time, instead of quitting after taking the hanger screenshot. Here is the result: 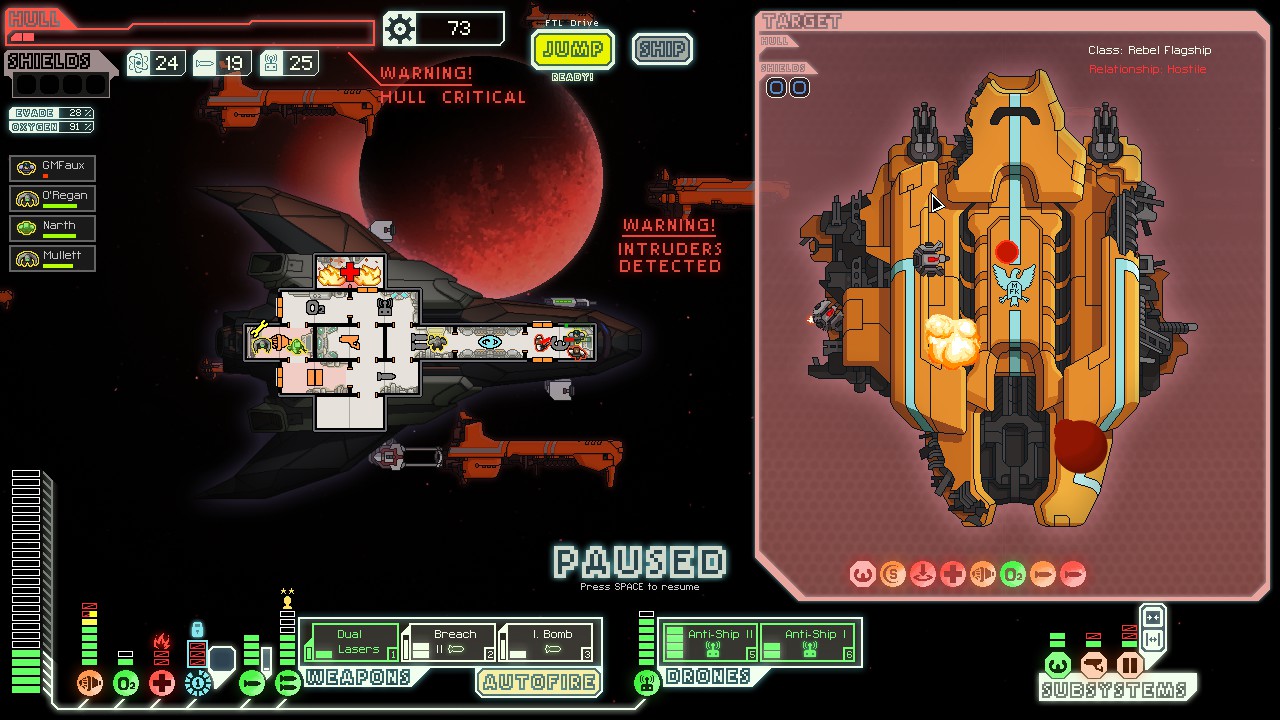 I almost lost my pilot!

Don't worry. He ran to the door room.

How did you beat the game with this ship?

That would be pretty challenging to play.

I'm bumping this because it was supposed to have been moved to Working Mods quite some time ago. It was mentioned in a post above. I suppose I could try to PM a moderator, but I don't feel like it. I thought this area was trafficked enough that one would have noticed and moved it.

Ora_unit_SR388 wrote:How did you beat the game with this ship?

That would be pretty challenging to play.

I have no idea. I'll call it luck, even if it did have some skill involved.

Early in the game, I got a Burst Laser I to go with my Dual Lasers. Later, I bought an Ion Bomb. I received the Anti-Ship Drone Mark II before I bought my drone system. I don't remember if I bought or received a Drone Recovery Arm. I bought the Anti-Ship Drone Mark I to compliment my Mark II. I received the Breach Bomb Mark II around sector 7. I only got one additional crew member this whole game, which I believe was in the last half; no one died. I went into round one of the boss battle with 27 or 28 hull, and never got to repair between any phase.

I've never ran a permanently shieldless ship before this. The fact that this one has a variable Glaive Beam probably makes this one easier than most.

Sorry it took so long to move the topic, i honestly missed it. PMing never hurts plus i cant miss it because i get an email notice sent.

As for the AE system limit, it's set at 8 systems max, so any ship should be able to buy any system with a question mark over Fed cruisers and Cloaking. Cloning Bay will replace the Mebay so you could allways buy it. The only way to prevent a player from buying a system is to set the system's rarity to 0 so it doesn't appear in stores, unless the XML tags change for AE.

Alternatively you could remove the system from the ship's blueprint, but that would cause the player to spend scrap on a system that would NOT appear on the ship and this should be avoided.
Report spam using the handy Report Button Mod.
Top

UltraMantis wrote:PMing never hurts plus i cant miss it because i get an email notice sent.

I recently PMed Kieve. I guess that one can be ignored now, unless he got it and told you to do it.

It's not completely about the AE system limit. I have no empty rooms left. It's more about if AE changes anything about how systems are handled. As things are now, I would just remove the teleporter for the hacking system.

I suppose with no Shields, you'd have to dump a lot of your money into Engines! The only way to survive would be to make your dodge rating punch through the roof.
Top

I suppose I buffed the ship up a little bit. You start with a drone system so all the possible missing systems can share the same room (AE system limit prevents overlap), distraction buoys, and the Glaive Beam on it has a slightly extended range plus a minor fire/breach chance.

I didn't add any rooms, so you can't get a backup battery. Shields are still something you can't get, but since the game has a shield overcharger drone and a chance at a Zoltan shield, the shield graphic actually has a reason for existing now.

Due to a somewhat recent discovery concerning the Zoltan Shield, I learned that this ship couldn't get a Zoltan Shield. Through further testing, I also found out that using a Shield Overcharger drone would crash the game. All of this because there was no shield system in the ships blueprints.

Shields have been added to address those issues.

From testing, I've also learned that setting shield rarity to 0 no longer removes them from shops. This ship was never meant to have a shield system, but since I was forced to add it and couldn't make it unavailable, my next logical step was to make it expensive to prevent purchase. I didn't want to make it ridiculously expensive, so I chose to set the shield system to max and price it according to the upgrade costs. The total came to 455 (125+20+30+40+60+80+100), but I gave a 5 scrap discount, so it only costs 450.

Shouldn't you add another 100 scrap? To go from Level 1 Shields to Level 2 (like the Zoltan B does) and thus have one bar available? Or that doesn't count since Stealth Cruisers always buy Level 2 shields?
Top
Post Reply
10 posts • Page 1 of 1