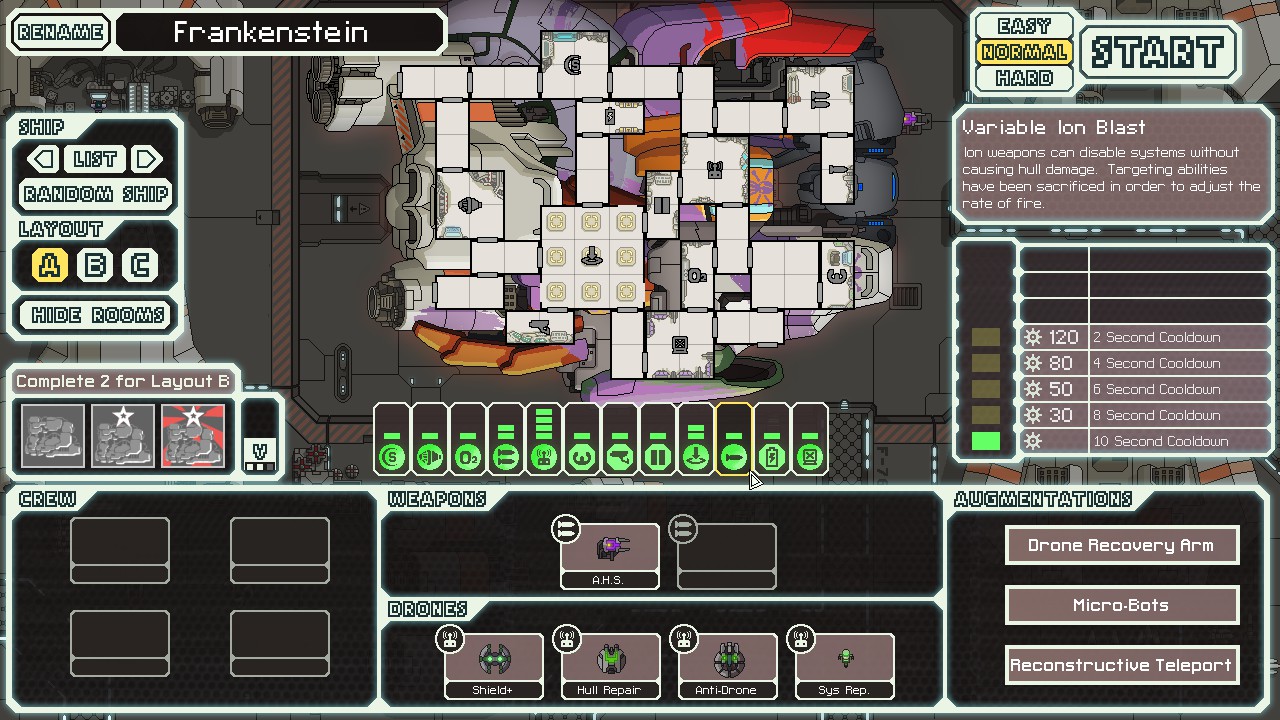 This ship has no damaging weapons other than the Engi that inhabit it. They bring with them a powerful hacking tool and an experimental Ion Blast.
AE.1.3 brings a type B and C which do start with a damaging weapon.

*Due to FTL patch 1.03.3, the teleporter does not perform as intended; crew limit is four. Therefore, the shieldless version of this ship will not be made.
*Artillery text not updated for FTL 1.6.x, but should still be playable.

Changelog for 1.0:
-Fixed artillery tooltip when hover on UI
-Append choice to DISTRESS_SATELLITE_DEFENSE event rather than replace event
-Include SMM metadata.xml
-Altered cooldown of A.H.S. from 16s to 20s; this thing is OP, especially since you get two of them
-Moved weapon mounts a few pixels closer to the ship
-Animated the Variable Ion Blast  :D

Update for AE.1:
-Updated for AE compatibility
-Decreased weapon slots to 2, increased drone slots to 4
-A.H.S. is now purple instead of blue; cooldown set to 19s; you only start with one now
-New set of starting drones
-Starts with all systems that the ship can have; sorry about the loss of customization
-No more medbay; heal through teleportation
-(Jan. 9, 2015) Silent update for misc.xml.rawappend

Story:
Victor, an Engi leader at a ship graveyard, decided to have a ship built out of the various, broken ships that cluttered the area. The Engi started by installing a teleporter system inside a hull piece. They attached a drone system and sensors, then added an AI program. The ship now had the power to build itself, under supervision from the Engi, by teleporting the ship parts that it needed from the surrounding scrapyard.

During construction, rebel data was intercepted while scanning the airwaves. Included in the data was blueprints to an experimental flagship that the rebels were using to take over the galaxy. Victor wanted to include some of this stuff in his new ship, mainly the super-shield system and the power generator for it, but they couldn't build or replicate any of it from the junk in this scrapyard. They needed to ally with the Federation in order to have any chance of stealing the rebel technology from that flagship.

Gameplay:
You need Slipstream Mod Manager and the Universal Starting Beacon (loaded sometime before this mod) in order to get your Engi crew.

This is the first flight for the ship. As such, the engines haven't been configured for optimum efficiency. They start at level 1.

The rebels are coming, but the "normal" shield system hasn't been configured yet for the awkward hull. They start at level 1, meaning you have no shield bars.

Blah, blah, blah... figure it out for yourself.

I really have no idea how to properly balance this ship.

As of AE, a cap on systems was implemented. This ship cannot accomplish what I had envisioned, so now it no longer has a medbay because of that.

I wanted to have all systems but cloak, but AE prevents you from buying them. Starting with all the stuff that this ship has may be unbalanced, but I don't care. It's my gift to the player for taking away their medbay.

AE.1.3 now allows for more systems, including cloak which I previously said I didn't want it to have. The ship still starts with all the stuff from the previous version, so you are still starting with a lot.

Gibs don't match the actual hull; their mostly vanilla gibs rather than edited for the Engi additions/alterations. Due to my lack of art skill, I won't be doing anymore work on the graphics.

A future update for this ship is kicking around in my brain, but I might not make it. It would replace the starting tips, as advised by my AE.1.3 tester, and it would add a new option to an Engi event.

Videos:
ZippyDragon (Mod Overview of vAE.1)
L O U I E (With CE and without the USB, so he had no crew. It's a short run.)

Credits:
Whoever wants to claim them
Superluminal
Slipstream
FTL
That one guy - Yeah, that testing back in Sept. was for this ship, before I had the ability to mod myself
Other people
Biohazard063 for AE.1.3 testing
Last edited by RAD-82 on Tue Mar 24, 2020 12:47 am, edited 19 times in total.

Looks like a fun ship! I made something similar once.
Some of my FTL mods you may like, or hate, or... yeah:

I think a version with 2 small engines instead 1 big 1 little would look much better. Maybe you could make a quick edit and keep both posted

Plus it would help with the shield being too big. Everything else looks fantastic.
Top

ScubaSteve3465 wrote:I think a version with 2 small engines instead 1 big 1 little would look much better. Maybe you could make a quick edit and keep both posted

Plus it would help with the shield being too big. Everything else looks fantastic.

Why would I want it to look better? It is supposed to be monstrous.

Plus, the shield isn't too big. It's the same size as the Federation Cruisers, unless you consider those vanilla shields too big.

It does have a custom shield graphic once you get it running.

More notes: The teleporter was originally going to be limited to level 1 to compensate for the size of the room, but since it still only teleports 4 people, I left it as a normal teleporter capable of level 3.

The Advanced Hacking System, which the mod also uses for the starting event to give you the crew, says it has 2 shield piercing. I'm not quite sure what to say about that, other than shield piercing didn't work as I expected it to, perhaps due to the use of ion damage or the lack of normal damage. The A.H.S. is very effective against shields, although you usually don't want to target the shields directly. Against one shield bar, it will hit the system you target, plus the shield. Against two shield bars, it hits the shield system twice, but not the system you target. It is an OP tool if you know how to use it effectively.

Version 1.0 is released! It has a nerf to the A.H.S. cooldown, but the Variable Ion Blast is now animated!

Note that this isn't the only ship that uses the USB framework. With the compatibility patch, you will also be able to play with the Auto-Cruiser Sovereign in Infinite Space. I'm unaware of any other ships that use the USB. From what I've read in the IS topic, I think future versions will be USB compatible.

The load order will be: (useless until I release the patch)

I tried this mod together with CE.

10 runs, 9x died in sector 1, 1x in sector 2. The combination of no hull-damaging weapons and no shield breaks your neck...

I would love to see this ship developed further, it is a funny concept. Kartoffelr wrote:I tried this mod together with CE.

10 runs, 9x died in sector 1, 1x in sector 2. The combination of no hull-damaging weapons and no shield breaks your neck...

I would love to see this ship developed further, it is a funny concept.

I've only tried this ship with Infinite Space. The starting conditions with that make this ship easy to use since you can start with shields and a hull-damaging weapon.

As for vanilla or CE, I don't actually know how difficult it is to survive in the beginning. This ship is my most downloaded mod, but this is the first time I've got feedback. I won't update until after AE comes out, but I'll now consider upgrading the defense drone.

Graphic-wise, there is room for lots of improvement, but I won't be trying to do that. I don't have the talent for it. I think it would be nice if it had a texture effect similar to one of these: link and link

While I don't plan on updating until AE, my next planned mod should have some custom drone graphics. I decided to do a little drone testing with this ship and have made an unofficial* patch. Load it after the ship.

*Unofficial, as in it won't be mentioned or provided in the first post

edit (April 25, 2014): Received message, "Sorry, the board attachment quota has been reached." Removed this unnecessary file to see if it helps any.

Since .ftl files can't be attached, it is a .zip file. Either rename it to .ftl or have SMM allow .zip files. Load this file after the Frankenstein ship.

Changes:
-Removed one Advanced Hacking System and lowered cooldown to 19s; having two is OP
-New defense drone; not final graphic, as the charged base graphic only works in the inventory, not outside the ship; light will be removed in future release (Due to the big ship, I don't think this "upgrade" works any better than the old defense drone.)

-(Untested) Added A.H.S. to Engi sector shops and Engi weapon list
-(Untested) New Anti-Ship Heavy Drone added to shops, with increased chance in Engi sectors (The drone works, but if it actually shows up in shops is untested.)
-Removed the Repair Arm version of Micro-Bots, providing a hull repair drone instead (decreased starting drone parts); restored Repair Arm to default (I didn't like having all augment slots used up and two of them using the same name.)
Last edited by RAD-82 on Sat Apr 26, 2014 3:14 am, edited 2 times in total.

I don't actually like what has happened to it. Starting out with so many extra systems (artillery, drones, teleporter) prevented the player from being able to purchase more systems. I even wanted to add hacking to the start, but that seems to have caused problems for the two missing subsytems: doors and backup battery. It's like the game took away from the subsystem slots to provide the ninth system slot. So to fix that, I removed the medbay.

You now heal crew through teleportation. This causes problems, since you have no doors to help you deal with boarders. (You also lost an augmentation slot.) I felt this was too mean, so I gave the player some doors. Then I decided I might as well give the battery, so you don't have to deal with the system shop.

You start with all your systems

You have no medbay, and you never will

You have to heal with the teleporter

edit: One of the new things in AE was the addition of the Vindicator Beam to the list of damaging beams. I hope that works, because I decided to add the Variable Ion Blast to the list of ion weapons. I hope the blue options will work with the artillery weapons. I haven't seen any runs with the Federation cruisers yet to know if it works.
edit2: Well, that didn't take long for me to see a video with the Vindicator Beam getting used for a blue event. Glad that is working.

such a shame there is a system cap now.

I assumed there would be no reason for it as the limited reactor power and scrap would make it very hard for people to operate or even obtain these systems
R4V3-0N, a dreamer.
Top
Post Reply
13 posts