I had some brief ambitions of trying to make a set of custom pilots (based on a Sentinels of the Multiverse fan expansion I made with a friend). After peeking through some of the other mods and dev guidance I've concluded I don't have the drive to learn scripting and actually make it anytime soon. But as an experiment I wanted to try doing a custom pilot portrait anyway.

Here's the character this is based on: 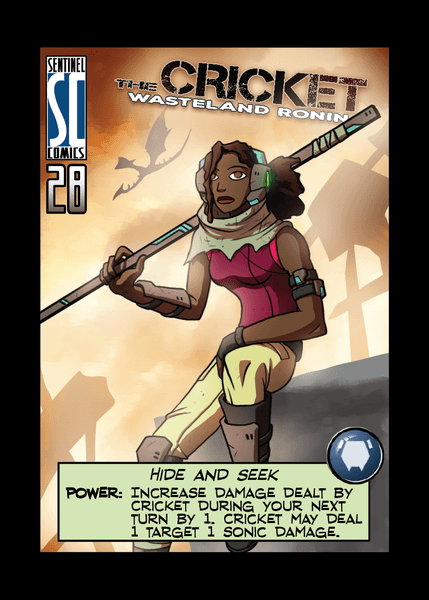 I got about 2/3 of her dialogue created before giving up on the idea of making a mod. If anyone else wants to try and implement her, I'd be happy to share it.

By the way, is the "low HP" background image available somewhere? Apologies if it's easy to find, I haven't looked very hard yet.
Top

And just for kicks, here are the other pilots I came up with. Same as above, if anyone wants to steal these, feel free. If someone out there actually wanted to work with me to create the set I'd be willing to try arting more of them and doing dialogue. They're all characters from the same Sentinels fan expansion set.

Balance comments also welcome, just for my own edification.

Some abilities have changed to things that seem easier to code, others for thematics.

I'd say you should work on the art and dialogue features first and just don't give up writing them.
Then, look at how other pilot mods do things, try and figure it out from there, give up, go on the Discord and ask someone who knows how to code stuff to help with the implementation.

That's how the Omega Pilots came to be anyway; plus while writing your dialogue and art, you can determine whether or not you actually want to implement that character/ability. I'll go through the list and talk about my opinion on some of those pilots.

Roland White: Titan Armor
When damaged by an attack, Mech gains a shield.

Well, there is a pilot who instead of repairing gets a shield... this one sounds a bit... exploitative.

Kate Shreeve: Climb
Mech can move through buildings and mountains.

Damn, been looking for that idea myself; sort of like the other half of Henry Kwan (in fact the character would have been his ex...)

See about getting that one coded. I want a pilot who is their own Force Amp

Unsure on this one being coded but I think it sounds like an interesting ability.

Not sure about the upgrade since promotions are random but there is an Amphibious trait some Mechs have in other mods. A pilot who does the same thing wouldn't be too hard to implement based on that. Look into this and make the pilot. Art, dialogue, this one looks like it can be done.

So we have another "Better Lily Reed" pilot?
Poor Lily... I like her personality-wise though

I remember in Pilots+ there was Atria's ability to self repair when powered along with repairing everyone else.
Not sure if that should be a powered ability here for self-regen. Alternatively - Repairing does +2HP

I like this one; there is someone in Mezz's pilots who does reflexive fire to the first target I think. There's also the Armed Train so the idea of shooting at emerging Vek could work fine.

So if you damage an Alpha, it's like Kazaaak striking a target on ACID?
Ehhh... not sure that's a good idea since Kazaaak is already OP.

Julia Takahashi: Sniper
After ending your turn, if there is 1 Vek with lower HP than the others, it takes 1 damage.

I should send you the code for my custom pilot Tabitha... she can strike a Vek anywhere on the field for 1HP of damage. Because I think that might be more useful.

Gargoyle: Leech
Repair is replaced with a 1 damage projectile that heals Mech.

Heh, so it's like my Omega Pilot Binah but without the ranged, self-harming laser...
Yeah, looks like you could just take that part and well... dialogue, art it up. This one is a winner.

Sen: Nature's Wrath
If Mech is set on fire, frozen, or inflicted with A.C.I.D., so are adjacent tiles.

Mezz's Pilots has that guy who can swap effects of tiles around...
And Deluge's Pilots has the robot who when repairing dumps ACID around him. The fire sounds dangerous for Time Pods but also exploitative if you jump into a forest with self-damage or something. And on an Ice Mech would be very powerful. So I'm not sure on the balance.

Simon Coil: Necrotize
Killing a Vek creates a friendly Spiderling which cannot act until the next turn. Limit 1 at a time.

Hmm... I like this idea, not sure about the coding.

Janet Walker: Blink
Moving onto a unit swaps it with Mech's starting tile and damages Mech.

So like Lucas Kendral from Pilots+ except it does damage and can swap with anyone... I'd be very careful with that power; I exploit Lucas' swap ability for free movement. This one sounds like it'd end a run if I accidentally cancel a move order.

Maybe it could be a repair ability instead; reduces movement of nearby Vek to 0 when repairing...

Alain Mormont: Drift Step
Mech can move up to 3 extra tiles, but next turn's movement is reduced by that amount.

Alec Shaheen: Summon
Teleport an in-line Mech to your side when repairing.
(Aim in 1 of the 4 directions, grabs first mech)

So a Grappling Hook Repair? Does it grab Vek as well? Might be worth looking into...

No. Retaliation is already OP. This is like that but on steroids.

George of Mormoth: Steadfast
Mech is immune to bump damage.

I like the idea. Does this include Vek spawn blocking?

Maybe just ACID since we have Ariadne for the fire immunity part.

Mezz's pilots has that... sort of. If that pilot not at full health when a turn ends, she freezes herself when repairing.
There's also Alice the Ice Queen who can freeze and unfreeze at will during a turn which is gloriously OP so... take that code and remove the "at will" parts so it's just freezing for repairs instead.

So it's an alternative to the Cyborgs, my own trash Omega Pilot Skynet and Deluge's pilot who can eject into a suit of armour upon death?
Art it up, dialogue it...

Yeah, so if you can look through all that, there are some real winners in there or at least that which would be "easy" to code up. Look for the mods I've suggested for ways it can be done before giving up and seeing someone who can code properly. Because it can be a real learning experience if you try it a few times, then being told where you might have gone wrong in the coding.
Be sure to post those coding attempts on the Discord for correction purposes as well.
Top

Thanks for the comments! You're probably right on the balance of a few of them, although unless/until I actually make an earnest attempt to learn this stuff it's hard for me to be sure.

Regarding others' code, I was hopeful about the odds of stealing to make a few of these, but haven't been able to find anything that A) I could make sense of and B) seemed in good shape. Example: The Red Alert squad's Amphibious trait appears to just be regular old Flying, with a different tooltip; so I'm guessing it's bugged. Mezz's status-swapper pilot also has some bugs, and all the"alternate repair" abilities I've seen don't play well with pausing (I'm guessing that's just something you have to live with if you use the available code and aren't smart enough to improve on it).

I was hoping to check out how you coded Otis, but I can't find the actual meat of that in your mod. I was afraid it was wrapped up in the dll. Is there an easy way to peek inside that? Or can you point me toward the right file?

Speaking of peeking, I've unpacked the graphical resources, but I'm assuming the community hasn't found an equivalent way to check out underlying code? I haven't seen mention of anything beyond the lua files.

Thanks again! I've been having enough fun just sticking my sprites and text in that I'll probably do at least a few more in the future, even if I don't get into the skill portion.
Top

tosx wrote:I was hoping to check out how you coded Otis, but I can't find the actual meat of that in your mod. I was afraid it was wrapped up in the dll. Is there an easy way to peek inside that? Or can you point me toward the right file?

Otis uses an ability that was not used by an official vanilla pilot, but still exists in the game.
Discord: ATOMiC#9226
Top

Went ahead and made another pilot portrait for the set: Roland White

I'm liking your portraits! Looking forward to see what you make with them.

Could you elaborate what you mean with this? Haven't heared about this before.
Top

I'm guessing the icons have to be overlayed on top of everything else? Because when you do anything that darkens the background, it doesn't get the repair icon. I saw something similar with the custom difficulty select on the hangar screen, where it was clipping on top of other menus. 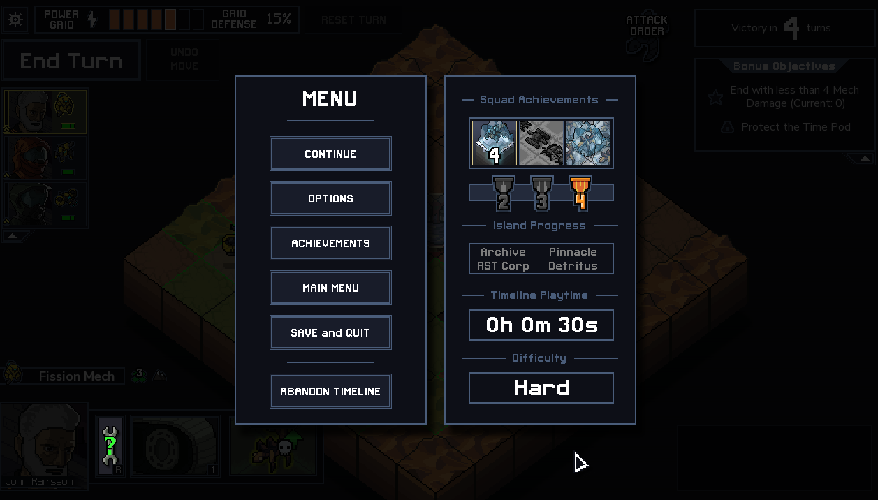 In the meantime, another pilot sprite: Athena.

As mentioned, these pilot ideas are all from an existing work, but I'm giving them ItB-appropriate dialogue and backstory. In this case, she's a big weird turtle found in the Vek tunnels beneath Detritus; no one's sure if she's a mutant, or an alien from a time pod...but she's friendly and good with machines.

I'm probably going to make portraits until I get tired and then either make another attempt at coding some abilities, or just put together a 'variety' mod with the new portraits and existing abilities (would be neat to be able to get multiple pilots with the same ability in a run).

I might also try to make a mech squad at some point, just because (learning to make a reloading sniper mech today has finally got me learning a few things...thanks to massive help from the Discord).
Top

I managed to get the passive healing skill to work, as far as I can tell. Made it only heal if you're not inflicted with frozen/fire/acid. Still waffling on whether it should be powered.