What were your most unusual/ridiculous fights ever?

PapricaLemonade wrote:Hmm, i do not really know if this story fits to this "section" in the forum.. Oh well.

You know the engi event when they say that you have a virus on your ship that kills engi's and they much destroy your ship to prevent it from spredding (Misspelled i know) And you choose the "Have your engi crew member over to talk to them". He gets killed and Blah Blah Blah, BUT, When i destroyed their ship something teleported or shall i say appeared on my ship.. AN ENGI. His name was... Virus. And he had full in all aspects. Really strange i thought... Because i had encountered that event many times before but that engi or thing.. never appeared on my ship before. Has it happened to any if you guys im really curios. Is this the virus who has been terror attacking the engi population?

That virus event is supposed to give you crew. if you are using the Engi B then you are screwed. Maybe.
Back from the dead. After a two year hiatus.
Top

So i was in the last stand fighting the rebel flagship and i was doing good. then on stage three i got BLASTED and my guns were far from being fully charged i had four hp left and then i noticed that.................ONE MORE BLAST FROM THE REBELS GUNS WOULD KILL ME! so i teleported my mantisis over and i saw a few fires the flagship had two hp left i first sent my hero manti into the fire and they killed the helm then they RUSHED to the something i cant remember it happend a loooong time ago. and when i noticed it was not dying in time i RUSHED them to the doors ( the max level for doors is three so it could not take long) and i killed that and.......... i won! DDDDDDDDDDDDEEEEEEEEEEEEEEERRRRRRRRRPPP those manti will never be forgotten WHAIT I FORGOT THEM ALREADY!

You cannot defeat the metal. The metal will live on.

I was playing Mantis B, since I had just unlocked it without trying.
There was the event where the cargo ship doesn't want to fight (jump 2), so they start charging their FTL.
Since they cannot get through my shields, I teleport both my mantis over and start bashing the crew.
While healing, I see this:
"JUMP IMMINENT"
Apparently, my reaction was to teleport both my mantis BACK ONTO HIS SHIP TO KILL THE PILOT.
And that is the story of how I got 40 points on mantis b.
The Engi Conspiracy Mod wants help with stuff!
Top

Alright, so time for your weekly/monthly Metanian durpiness.
The simplest way put was basically this:
All four of my mantis die before the flagship fight in Mantis B.
So I'm like, "Well, f*ck. What do I have?"
And then I notice this convenient holy hand grenade icon which was the heal bomb.

I then proceed to load up the teleporter with this loadout:
1 Human
1 Engi
2 Zoltan

Normally these guys would get shredded but...

The Holy Hand Grenade is actually useful and kept my entire crew sustained long enough to kill all the enemy crew. I then run to their Piloting/Shields and destroy those with my 3.5x attack power and then proceed to win the game.

And that was the day the Holy Hand Grenade(aka the Heal Bomb) won my respect.

7
Back from the dead. After a two year hiatus.
Top

Just back in FTL this past week, now playing AE. Haven't got the hang of Normal, but I've had Easy victories in the Kestrel B, Fed A, and Engi A. Then I tried Normal with the Stealth B for a lot of runs that had only 2 get to Sector 3 and 1 to Sector 4. I have a lot to both relearn and learn anew, so I went for an Easy run with it.

Well, going through the Sectors was tough, then easy, then tough. Added Shields, Hacking, Mind Control, and Batteries. Had better Scrap efficiency but still have to improve that. Ended up going into the Flagship battles with a full crew, Pre-Igniter, Explosive Replicator, Zoltan Shield Bypass, Glaive Beam, Flak I, and Small Bomb. First round was easy (they Hacked my Cloaking but didn't prevent me from using it when needed), second was tough until I Small-Bombed out their Drone Control and got my Hacking Drone in, and third was brutal. Didn't have the rhythm of my weapons right and had left far too many of their crew alive.

But held on to the end, with 1 Hull left, until I smashed down their shields, and as their last shot blew up the DA-SR 12, the final slash of the Glaive Beam cut the Flagship to pieces. [ Worf ] "It was glorious!" [ /Worf ] 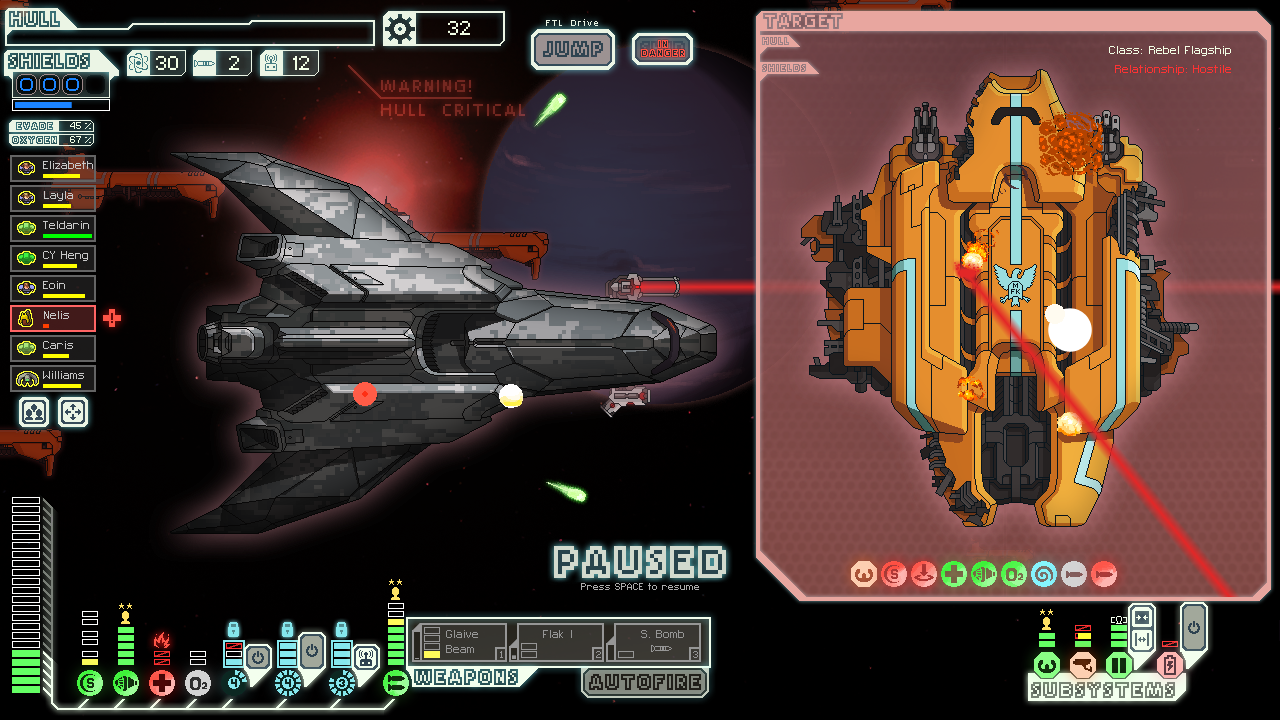 Woah. Did it count as a victory, like did it go to the credits/high score list or was it not timed just right?

I still think the most ridiculous fight ever is the Crystal B. First jump, Solar Flare, Automated Ship with Burst Laser II, Mind Control.
Top

I recently had a very short mission with the Fed C. At the first jump a pirate rigger with a Combat Drone, Heavy Laser and MIni Beam said pay a small fee; I said, "Screw you!" and sent my Mantis/Zoltan boarding team over. They were fighting a Rock and a Human. (I suppose I could have tried running away from the Rock, but it probably wouldn't have mattered all that much.) Then the TP took a hit. I sent the other Zoltan to fix it, but it walked through Shields

, depowering them, so I took a hit to Engines. Then after my boarders died, my Clone Bay took a hit from the Heavy, stopping the cloning, and setting two (2!!) fires. FML. By the time the fires were vented, it was too late to recover anyone.

But wait! There's more! Shields took a beam hit, then a Heavy Laser shot breached it. By the time I got Shields back up, I was at 6 HP. O2 and Doors were out, as were Piloting, Engines, and Clone Bay. Human and Zoltan were both hurt, so couldn't have repaired anything without air. Couple more drone hits, then the beam finally took me out.

all i have to say is second jump stealth B. Rebel rigger with mini beam and beam drone. first hit depowered Glaive, second and third took out engines. Score = 30
"The're coming to destroy us... Why?... We want peace..."
The Dark Ones
Top

stylesrj wrote:Woah. Did it count as a victory, like did it go to the credits/high score list or was it not timed just right?

Yes, it did count as a victory.

You just have to destroy the Flagship; survival is optional.

Tharsis wrote:all i have to say is second jump stealth B. Rebel rigger with mini beam and beam drone. first hit depowered Glaive, second and third took out engines. Score = 30

I really hate how you can be killed in the first few jumps despite whatever you do. Or you just have to keep moving and the enemies get tougher faster than you do.

Been trying Normal runs on the Kestrel C. 3 so far. Died in Sector 1 (first jump battle near a star, second jump same, no third jump

), Sector 5 (wasn't good enough with what I had picked up to take on the ships there), and Sector 3 (just had too many enemies with missiles).

It's making me think fondly of the Stealth B. Which I'm thinking you need to spent the first 50 Scrap on level 5 Weapons so a single hit doesn't kill the Glaive Beam charging.
Top

Still no crew and no medbay, I have been forced to spend most of my scrap on repairs so far. Finally i have enough scrap for a medbay yet no missiles. One of my slugs died in a boarding fight when I forgot to take pilot off helm and heal bomb missed. I had just used that my last missile to heal my 2 slugs. Downloaded data says there's a shop 2 jumps away. I jump to a supposedly empty beacon.

"All of a sudden your world changes. The Mantis are aboard your ship."

The mantis teleport into my helm and tear apart my pilot, and when my engineer tries to help he does too. And my FTL was only about 75% charged too...

Less of a fight and more of an event but I was boarded so it kind of is a fight.
Top
Post Reply
77 posts