Distribute and discuss mods that are functional.
Post Reply
25 posts

These Mechs hail from beyond the known Islands, drawing power from water. 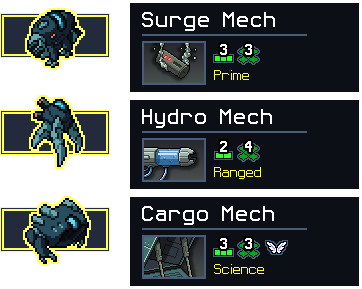 Surge Mech
Dowsing Charge: Unleashes a geyser that pushes 3 tiles. Damages a target on Water, or creates Water if target is an empty tile. (3 damage; pushes adjacent tile away, and tiles on either side of that to each side)
- 2 cores: Always creates Water on target unless it is a Grid Building or spawning Vek.
- 3 cores: Increases damage to Water and non-Water tiles by 2.

Cargo Mech
Cargo Bay: Leap onto a nearby enemy, storing them inside you. Enemies already in storage are deposited at launch. (Range 1; stored enemies have their attack canceled and are no longer present on the board, HP can still change through Fire or Psions)
- 1 core: Extends range of the leap by 1 tile.
- 2 cores: Push tiles on either side after leaping.

v0.05
- Added sprites for the Earth Mover, Train, and Missile mission units when they are destroyed and on water tiles.
- Squad weapons can no longer create water on the supervolcano tiles of the final mission.
- Surge Mech's attack no longer triggers smoke when changing sand to water.
- Cargo Mech code is slightly more robust, on the off chance that something gets powered while in storage.
- I put in some disabled features that I may enable later, for allowing the Cargo Mech to transport friendly units.

v0.02
- Fixed Cargo Bay's targeting so it can't swallow friendly units, avoiding bad behavior. May code that up properly in the future.

I love your artwork! Cool style

Your mode is always great!
I've played for a while, but I always feel like I'm good at balancing.

The other day, I had a chance to play another squad that generates water.
He had a strong feeling of being too powerful, but this cool guy you made felt just right on the line.

I'm not used to it yet, so the hard four-island (of course, with a 30K target) video will be released later.
I'll upload it for you.

During the play, I encountered a bug and put it on the discord side for now.

As soon as the video is uploaded, I'll take a picture of the bug on this side and check it out.

Whoops. You're not supposed to be able to swallow friendly units; when I was cleaning up the final code I accidentally removed that check. Swallowing something de-powers it, and releasing stuff usually re-powers it, but since the mission ended there was no re-powering.

I've uploaded a v0.02 that adds the "no allies" check back in. I may also revisit allowing you to store allies, in a future version.

EDIT: Also, if you still have your save file, you could probably continue that run by going in and finding where the Surge mech is flagged as Unpowered, and changing it. Then either update the mod or just don't swallow any allies for the rest of the run

When I saw the cool mode, I felt like I wanted to do QA, so I tried it.
As you said, if I could fix the save file, I'd try. Thank you.

I thought about that, but it would only apply to Hydro, who already has a somewhat busy ability (now that acid/lava can be drained for effects), and the squad's low damage means putting out fires might be harsh. There's already only 1 mech that can start fires.

May still tweak it at some point, but think I'll leave it for now.

I did finally get the code working to allow Cargo mechs to eat friendly units; it's neat but it makes the code a lot messier and is of limited use, so I'll probably leave it out for now until I test it a lot more and/or find it to be useful.
Top

Overall, I feel like It doesn't have enough firepower.
(Maybe it's because I haven't used it yet.)

First of all, it's not easy to create variables with basic weapons.
And I'm not sure about the first upgrade of prime weapons. I think it would have been better to increase the basic amount of damage

(+)
If you put more push options into your range weapon like Prime, you might be able to create more variables.

I'm not sure about giving them more firepower; they can instant kill so many things that the goal was to force players to use that and not have much damage to work with. And if I'm not mistaken you only took 3 hits to the grid (2 resisted), and neither would have been solved with more damage. (Unless I'm misunderstanding your comment?)

The Prime's first upgrade should probably cost 1 core, but I put it there to help with it being a non-flying mech. It was probably more important in the early versions of the squad where all the water generation was there from the start, so there was more water to interfere with aiming. It used to have a "+2 water damage" upgrade, but that was even less useful.

I'm also leery of giving the ranged mech more push, because the squad has so much push/reposition ability already, and ranged weapons with a lot of push can solve SO many problems.

Not that it would have changed much in your run, but v0.04 adds elements to the ranged mech, so if you drain acid/lava water, your shot applies acid/fire effects.

I'm also going to try cleaning up the interaction of water with special terrain tiles like conveyor belts and teleporters, so that it's less confusing.

And I may eventually allow the Cargo mech to swallow allied units, because I did get that working, it's just not very useful.
Top
Post Reply
25 posts