Hello, I'm having a problem with the endless loot texture pack addon. I can load everything properly following the order in the wiki and the forums, and everything is installed properly by SMM, but when i get to loading the game it takes a very long time on the loading screen (the new CE one) but crashes with a Mingw assertion failed error and the message:
Assertion failed
File: src/rapidxml/rapidxml.hpp

I tried reinstalling FTL, reinstalling SMM, removing ftl.dat from the backup folder in SMM and everything i could find on the internet including using the 4Gb patch, but nothing worked. I can run the game with CE only and CE and endless loot without textures but it crashes whenever i load the texture pack. Any idea how to fix this or a version of endless loot without the texture pack and normal textures?
Top

I was making good progress on winning with every ship on Hard from a clean save. My first run in the Rock C was proving to be an absolute blinder, successfully decrewing almost every enemy ship and managing to reach the Crystal sector, unlocking the Crystal A.

Then we had a brownout.

And when the power came back and I rebooted my computer? My save file has been completely wiped.

The game was already fighting me tooth-and-nail just to get this far (multiple at-flagship defeats in Stealth C, horrific RNG screw in the Rock B and Lanius B, having to play both the Kestral B and Stealth A eight times each to finally get a win, etc.), so clearly it just doesn't want me to get it done.

And you know, what, game?

It's nice when everything in your life is suicide-inducingly depressing. It's just nice.
Top

Those matters with save files wiping out, they are easily and quickly solvable in case of FTL, by making a simple .bat file (assuming you're Windows) which copies your save files to a separate location, and then making a task in your OS' built-in scheduler to run this .bat file like every couple minutes. FTL save files are so incredibly small this won't stress your PC at all - while providing you near-real-time backup for your save, making it entirely protected against any brownouts. At worst you'd lose a minute of gameplay or so.

I am sure google can tell you details about how to do this. And yep, condolences on the good run wiped by those lazy electricians or somesuch... It happens. Don't let it get you down, man.
Top

I've just installed the Captain's Edition and I have a small visual problem with it:

For a person with OCD that is a somewhat annoying thing to look at.

I have these mods turned on and I believe they are in the correct order: 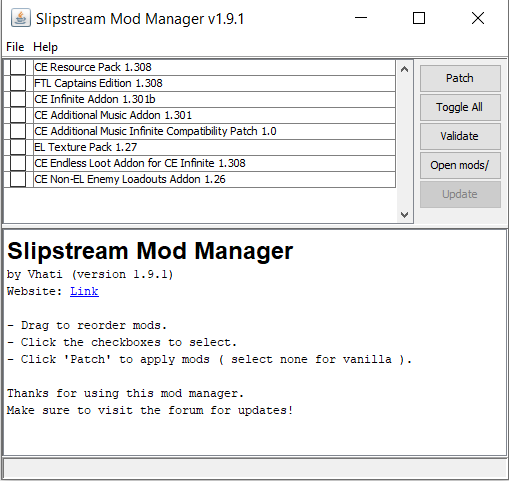 What can I do to fix it?

Thanks in advance for any help!
Top

Having some issues with CTD's. Sometimes a beacon will crash me, a couple runs ago any attempt to leave a beacon didn't close the game but froze the image (game was still marked as running in task manager) and remained unresponsive for an hour before i closed it. Combat augments almost unilaterally cause a crash, though as I'm using the 60-bar reactor ship "The Potential" I imagine that's probably an incompatibility. Latest one crashes the game every time i defeat some form of automated scout. Both this one and the beacon-leaving pseudocrash wiped the current run save after crashing twice. Also, unsure if it's related to anything, since the game loads fine and seems to run fine barring these, the initial loading bar appears shifted slightly up and to the right of the image meant to contain it. all other in-game text appears fine.

Currently running modlist - Checked mods are the ones loaded: 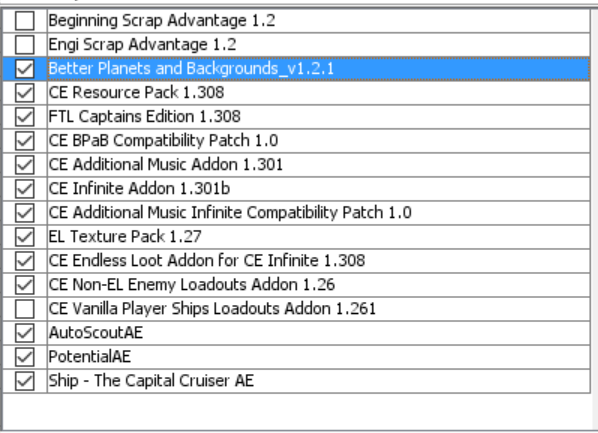 Question; can i use captains edition sprites, and if so, where can i find them?
Top
Post Reply
6636 posts