This leads to even more annoying sec1 for most ships, due to the high likelihood of enemy ships having them. Unavoidable 1 damage hits through a single shield layer. For stealth ships, run ender encounters.
Top

I still am using an older version of CE with my latest patches and the animations are fine (or at least most of them).
I'm not exactly sure what is causing this, it's either the old hangar image or Linux affecting it. (AFAIK you're run the Linux version of 1.6, so the Hangar might be glitched there.)

And for the next update after this, I suggest that you go through parts of the mod and clean up any obvious errors (Duplicate blueprints/events, uncapitalised words in Combat Aug text, inconsistencies, etc.), practically a spring clean for your mod (It's coming in like two months anyway). You may want to warn github spellcheckers to halt their progress so that you can update everything consistently once you finished cleaning.

To anyone interested in creating separate torrents for CE, I suggest that you wait until the patch has been fixed. (It shouldn't take that long to fix)

I polish other mods because I am too lazy to make my own.
Top

Ok thanks for the reports.

I ran into this in the hangar when I started using Endless Loot, everything's updated to the latest. The block of white/yellow disappears when leaving the hangar: 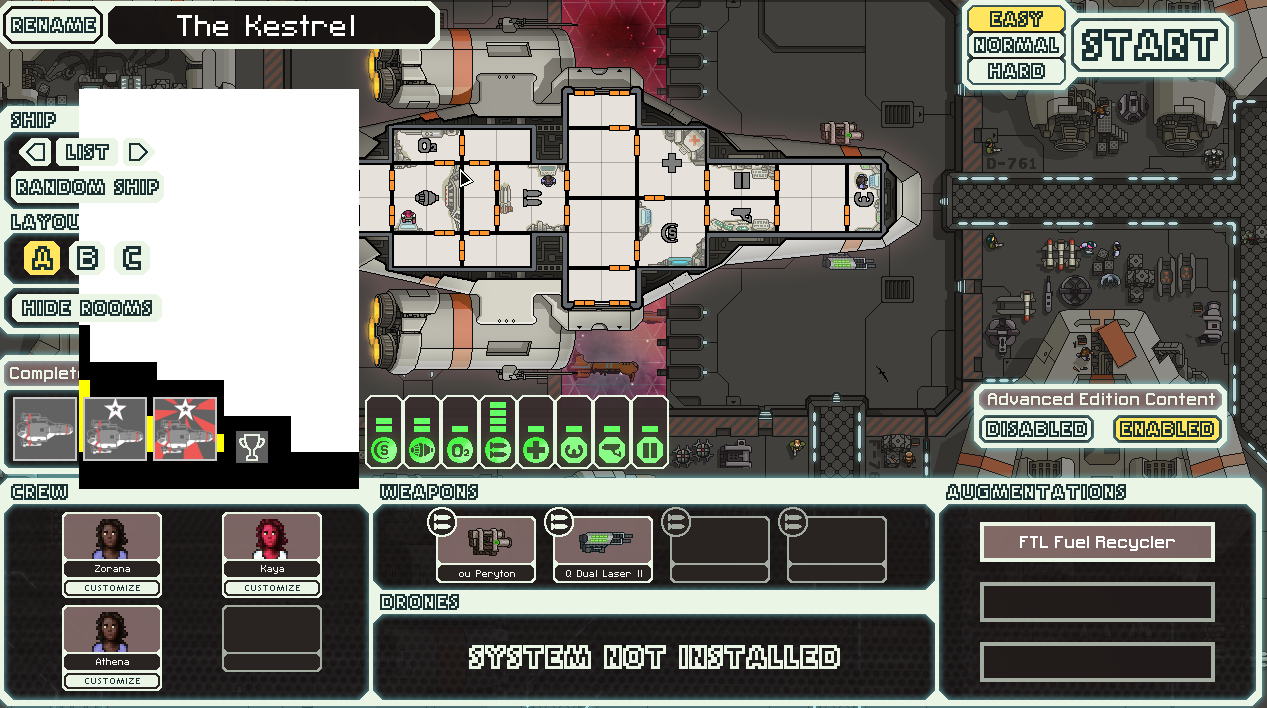 Everything goes back to working as intended once I remove anything EL from the load order.
Top

Here to confirm the above happens with regular EL (for Inf).

One of the tips regarding trading still mentions that the trading augment needs to be sold, and that not doing so is cheating; since trade goods are automatically removed now it's no longer needed
Top

de/odex wrote:Here to confirm the above happens with regular EL (for Inf).

veritas427 wrote:One of the tips regarding trading still mentions that the trading augment needs to be sold, and that not doing so is cheating; since trade goods are automatically removed now it's no longer needed

veritas427 wrote:Engi repair ships that spawn with medbays don't have them connected to the rest of the ship

Thats intentional. Repair ships don't have good medbays in general, the Engi one can only use it to power it's nano medbots.

The latest CE Ressource pack doesn't seems to include Anti-personnel laser sounds? They are missing for me, but other sounds like the changed rocket ones appear to work for me.
Top

Someone on the Steam forums doesn't want to sign up for this forum, so I'll just post this here.
Their post is about a Rebel Pusher enemy. Their picture shows the wrong hull for the room layout. The post doesn't seem to have any other useful information aside from it being CE 1.306.

Since I'm here, I'll take a stab in the dark at that hanger problem in Chronosplit's post. That distorted graphic is from the nullResource image, so I'm guessing it means something is missing. Based on the position, I'm guessing it is a hanger animation that Sleeper Service says he cut in the 1.305 update. Perhaps that cut animation has code in the EL mod for some reason? I don't know how much work went into the hanger animations to even know if that is the problem.